I’m about to pull the trigger on a system upgrade and just wanted a sanity check. I’m upgrading from a 4770K so I think I’m due.

This is what is sitting in my Amazon Canada cart right now.

I already have a Corsair RM 750 from my current system that should continue to work fine and I recently bought a Define R6.

My plan is to use the included Wraith cooler until I can get one of these EKWB kits. When Nvidia releases some new GPUs i’ll get one of those and add it and another radiator to the loop. Until then I’ll just use my RX 560 on air.

I was hoping to go full AMD on this build but Vega 64 still isn’t compelling and there isn’t supposed to be anything new until 2019 from what I have seen.

Another thing I am concerned about is the software with the Corsair RAM with the Asus board. Does the Asus software support the memory I have (Corsair RGB Pro)?

I was thinking about running Linux with a Windows KVM for gaming, but may just install Windows on the new SSD and use my old drives for Linux and be done with it. That situation is a discussion for another day.

Even with overclocking the crosshair is dumb in my mind. But if you absolutely want to watercool with that specific block… it’s fine, I guess.

Still, I would invest in better RAM first, namely B-die.
970EVO is a great drive but again, before watercooling I would probably up that to 1TB.

I don’t really need the storage. I’d rather have the cooling.

What is the best way to find out if memory is B-die?

I suppose I could go for a cheaper board. My current board is an Asus Z87-K and its kinda low end. I wanted something high end for a change. Its something I wish I had spent more money on in my last build.

Personally I have the Taichi Ultimate from ASRock. Twice. It is less money and has 10GbE integrated which I think will make it last. Otherwise it is a damn solid board, better than most other X470 boards in terms of VRM and features.

For B-die look at these: And honestly, watercooling as well as overclocking is a waste of time and money on a 2700X. They are pretty much maxed out from the factory.

i wouldnt use corsair ram with amd. tends not to mix well, you usually boot but getting advertised speeds is difficult.

I don’t think I can get the Taichi Ultimate here easily.

I don’t think I can get the Taichi Ultimate here easily.

I just looked after parts and I am always underestimating how dumb prices are in Canada.
The normal Taichi is 300,- pesos? WTF? I bought my Ultimate for 270 Euro.
I guess the CHVII is fine then.

The cost isn’t a huge problem for me. I just like having all of the features. I think I will look at getting different ram that is B-die though

That is probably Hynix.

If I can find good parts in stock at my local store (Canada Computers Waterloo) then I will probably go get everything today, otherwise I’ll get everything from Amazon.

Aside from the motherboard I wasn’t too concerned with getting the best of the best because the difference between some of these things is so small its not noticeable. RAM being an exception. I can apparently get a Corsair M300 SSD instead of the Samsung SSD.

I can’t find anything with that name. And honestly I would go with the samsung. They know their shit, they give you a good warranty, the drives are faster than basically anything else and still in the same price range. Also Samsung is actually making the damn thing, Corsair doesn’t make NAND.

ok, i’ll just get the 970 evo then. I’m looking around for B-die memory now but its either hard to find or crazy expensive

I just found this on Amazon. Yeah, its Corsair, but it is on the list of Samsung B-die. Looks good and doesn’t cost a fortune. 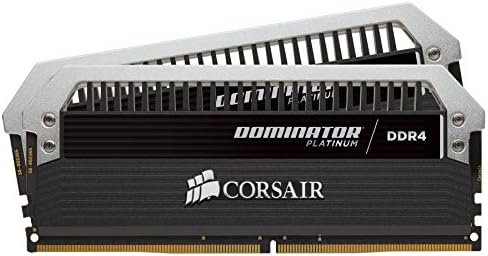 The Dominator family of memory represents the ultimate in performance technology engineering from Corsair. The Dominator is designed to have the highest performing IC maximum over-clocking capability ...

i think thats one of the most expensive mobo’s out there - and it ain’t any better than others.

I thought the NVMe Raid feature was cool. It means if down the road I want to buy a 2nd SSD I can put them in Raid 0 (with proper backups etc). My current system is two Samsung 840’s in Raid 0 and it works well.

Other than that I may look at the Asrock board.

Swapped the RAM to this Corsair kit which while not GSkill, is Samsung B-Die according to the link above.

I think I will still get the ROG board. I have had good luck with Asus in the past and the price doesn’t bother me. Yes, I know it is overkill. Getting an Asrock board from Amazon or Canada Computers isn’t really possible and I’d rather get everything from either one of those two and not Newegg.

I’d question buying a 400 dollar motherboard for a mainstream system.

If you’re really concerned about the power design, the taichi is half the price and won’t dissapoint

the taichi is half the price

That’s the thing, it’s not in Canada. And when you kick out the WiFi from the CHVII they are almost the same price, the Asus is like 30 bucks more.

that sucks, man. Is it also that bad on the west coast over there? I’d heard Toronto is one of the best places to buy a PC in america

Exactly. I can get the Taichi motherboard for $313 with a $40 mail in rebate at newegg + $5 shipping, which is around $100 cheaper than the Asus board. If I get the Asus board everything comes from Amazon with Prime so I don’t need to deal with Newegg.

I think I’m just going to spend the extra money and get the Asus board.