Despite all of that, I would love all of your opinions on getting a 21:9 (I would get one of the 3440x1440 LG ultrawide monitors) or a 4k monitor. Would probably go for the AMH A409, which I know the color accuracy isn't super great, I would probably keep my 27" monitor for color work.

Would just like your thoughts on which form factor you all prefer.

Honestly, it's entirely your choice...
You can easily get a stand and have the 21:9 under the two 1080p in triple setup...
The 4k can do you good even with just one monitor. It will give you huge work space...
Honestly, I would prefer multiple monitors instead of one huge monitor for the reason of customization. I will be able to arrange them anyway I like... But that's just me. Wendell stated, that 40" 4K is a bliss... So it's really your choice...

I do programming every week for class and such and 4k is amazing for that. 21:9 might be great aswell but I haven't used it.

I have the crossover 288k and it's a great panel and it's uber cheap as well. (at least for 4k panel prices)

I've always been intimidated with the idea of 40" 4k. I've looked up that crossover monitor, is 4k at 28" good in your opinion?

I personally think 28in at 4k is great haven't had any issues! The text is super crisp. Really the only negatives I have found with this monitor is that the colors are a bit washed out and the menu I haven't been able to figure out how to change the language some of it is in english and some of it is in korean. I didn't have any dead pixels or anything either which was nice!!!

Just actually was able to get the language changes just googled another review of a crossover monitor.

There are some ultrawide 1440p options around, but they cost as much if not more than the current 4k options, which you technically can have ultrawide with anyway. (like wendell said, there is a Ultrawide hiding in every 40+ 4k screen).

The only real reason to get an ultrawide would be if it could handle 120-144hz. That's something 4k screens can't do. If that's important to you?..

my next monitor i want 21:9 1440p ips freesync and 75hz is ok with me but if theres a 120hz option that isnt too much higher priced then i could go for that too.

I was literally just thinking that "Oh wait a minute, it's 3840x2160, so theoretically it CAN be a wide screen, sort of."

I have only used 60hz panels, so I am totally good with doing that. Probably gonna get the AMH 409u. :)

Really if you truly want ultrawide I would go for those expensive curved versions. They actually look to be worth it, but again, expensive, at the moment anyway.

Honestly, 4K on anything less than 40" diagonal screen is a waste of time and a headache for OS graphical UI's because everything is so tiny in text. Yes of course you can change GUI scaling settings but that doesn't always effect all programs in a good way. Prime example, I like to play UFO: Aftershock from time to time. If I use windows GUI scaling on this 20" Samsung panel with it forced at 2560x1440 resolution, the game wont rescale to the dimensions of the monitor correctly when it defaults to it's in-game resolution of 1024x768. This leaving half the damn game out of frame of the monitor, lol.

As for Ultra Wide HD, 2560x1080 monitors in the 29" diagonal panel range are just perfect for pixel density and GUI scaling for use with movies and other ultra-wide compatible "cinematic" games. The more expensive 3K Ultra Wide panels at 34" diagonal screen size work for situations where you have more desk space, but not enough for a 40" diagonal screen.

Acer has a monitor with those specs, except with supposed 144hz refresh. 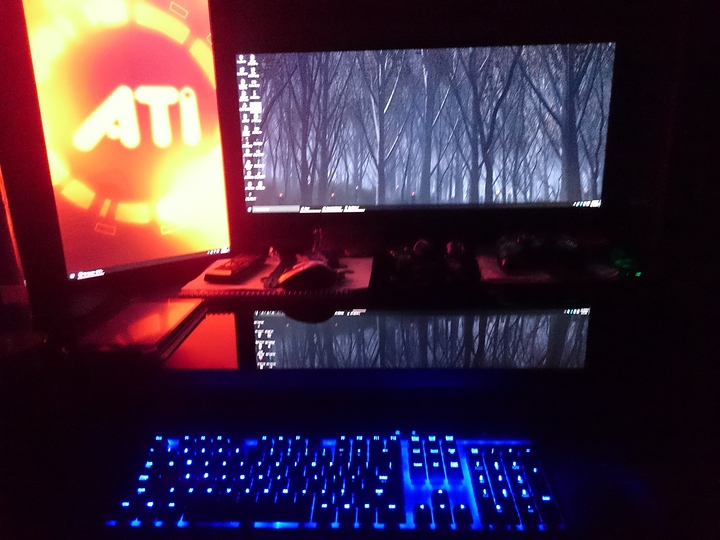 I'm hoping to catch that one on sale so I can get it for a steal. I watch a lot of movies and would prefer to game at 2560x1080 with this watercooled reference R9 290X I have in a native pixel density. Instead I'm stuck with 1920x1080 forced or 2560x1440 forced on this tiny 20" samsung panel. Causes me the problem of sticking my face right up to the screen to read some things at times.

I mention it in the thread. but it has one of the crispiest, sharpest panels I've ever seen.

As for the 75 hertz and Freesync stuff. for me to remedy high frame rates and or lower frame rates is to Fiddle with the filters so i get a high frame rate. and then go in Catalyst Control Center and just set the maximum output FPS to be 75 FPS. you don't need V-Sync and your GPU won't output more then 75 FPS. you're games will be like water.

Hey, I am not the only one not freaking over freesync; and believe there are smart alternatives. Cheers. :-)
edit 1 = but would not do without my 40s., cannot go back. 40 inch is intoxicating !

That sure is a nice monitor but out of my price range. im not really worried about upgrading my monitor yet for at least another year or two anyway so hope fully when the time comes the features i want i can get at a lower price point.

After watching many video reviews, not necessarily this monitor, just other 4k 40" Monitors, I'm sold. Gonna pick this up soon.

RIP wallet, but seems very worth it.