Hello Car Enthusiasts, first time poking around in this section. Need to pick some brain here. My car of course mentioned in the Title is a 1997 Mercury Cougar. The V6, 3.8 Liter Model. The problems that I have been having for a while is it takes a while to start, sometimes a couple of tries, I ruled out the battery as it's brand new. Also, it often doesn't like to take off, it feels like it's misfiring, not getting power, and sputters a little when I go to accelerate, sometimes even with it pedal to the metal and I don't accelerate that quick. I talked to my Co-Worker Travis, and he said it could be a bad spark plug wire, spark plugs, and/or the coil packs. He said to unplug one spark plug at a time to see if the car will start, if it doesn't he said go to the next one. I can't remember what he said exactly; and need to confirm a way of testing that theory. Any help will be appreciated!

Is there a misfire code? If it's a coil pack, it'd probably throw a code, but no guarantee.

I'd start by getting a spark plug wrench and changing all the plugs. That should only run you $15. Even if they don't need it, if they haven't been changed in years, old spark plugs can lead to worse gas mileage, and they're so cheap that replacing them will pay for itself pretty quickly.

If you still have issues, move on to the wires. To test the wires, you can get one of these: 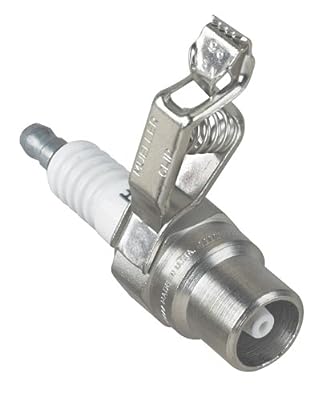 Check for spark on gasoline engines used in import and domestic cars and trucks plus small engines.

It idles fairly fine. Just when either starting or accelerating is when the issues come up, and also there isn't a misfire code given, also no place to plug one of those little checkers in. I do have a check engine light on though.

I really doubt it's the coil packs then,but it's still possible. That said, if you know someone with an ohm meter (or have one) you can always test the resistance yourself to see if they're good.

Also, if I remember correctly, the old Cougars had the OBD ports on the passenger side.

But yeah, personally I'd just start with the plugs. It'll take an hour, it's cheap, and the car could probably benefit from it even if they aren't busted.

Also, it often doesn't like to take off, it feels like it's misfiring, not getting power, and sputters a little when I go to accelerate, sometimes even with it pedal to the metal and I don't accelerate that quick.

Is your engine revving high when accelerating? Is it shifting gears?

If changing the spark plugs doesn't solve it, I would think about checking out the fuel injectors. They could be not allowing enough fuel into the engine when the are supposed to. Causing hard starting and sputtering. Check to make sure everything is clear, both on them and inside the intake manifold, carbon buildup may be a possible culprit

It may be the alternator. If the alternator does not charge your battery enough, it looses it's charge and run out. If you boost the battery with another one does it start easily?

The first question is when was the last time you replaced the spark plugs, ignition wires, and coil/distributor?

these are the first things that can be causing the problem, the next is your Mass air flow sensor can be going bad also.

I had this motor in a Ford Contour its a fun engine when it works.

If his alternator is dead, he'd most likely have a battery light illuminated on the dash. He also wouldn't get very far, because driving without knowing your alternator is dead and not how to stretch the battery's charge, you'll kill it real fast.

They were replaced last year. Right now I'm going to investigate the coil pack and the throttle position sensor. I'll look into the mass airflow sensor as I eliminate the others.

I don't nkow yet about shit.. I was just in shock when I saw Mercury Couger! and now.. mems of best friend long ago. Damn that was a sweet ass car. so.. I'm in..watching. mems of a friend long ago since past.

It's not a bad car. Very tough though.

sounds like a bad spark plug, what you can do is get the car running, then one by one pull the plug to each spark plug, the one that doesnt change the idle of the motor is the bad plug as it isnt working it make no difference that you disconnected it. also you can test the charge level of your battery, take a volt meter and it should read about 12 volts if it's anything lower it might be a bad alternator if you got a new battery.

ok read more of the thread, you can try spraying the MAF sensor with MAF cleaner to see if that helps, you should take it to a shop that test the engine code for free, i think pep boys does this, this should give you a better idea of what's going on. it could be even the oxygen sensor

I'll have to look, from what my mom said, she changed them out last year. To basically new. I'll have to check them out. No funky smells, and about 120k miles.

Checked the MAF a month ago, and it was good, Even cleaned it.

if any of the other sensor are off it can actually foul your sparkplugs sooner thatn just being new after a year.

it was a bad ass! I happened to nab a late 69 mustang w/ what would be a Boss 70 . it was a short run of test cars. it was an experimental 351 wind that became that years maodel that whipped the shit out of Chevey. Ford fucked up dropped that ebgine. Chevy.. smoked'em in '70 and year on.. hmm.. ltill 1989. and nascar got blindsided by how powerfull fords engines were.. just.. whoopsy. Then.. hello restricter plates.. fuck Nascar ever since!

LOL! That most of been fun