1080p gaming build. Did I make any severe mistakes?

Here is the build
Are there places where I could improve this build or save some money while still keeping similar performance?

If you can, go ethernet instead of wifi, and if you have any extra cash put into a power supply with a higher rating. Other than that I'd say it's a very solid build!

I'd maybe switch to a 290x if the future's important to you, you'd be able to step up to 1440p You'd have to spend more on the PSU though.

http://pcpartpicker.com/p/6MmFyc if you want to consider 1440p

+1 to ethernet though. Once you use ethernet it's so hard to go back to gaming on Wifi.

I would recommend going off ethernet unless you absolutely cannot avoid it. Take the extra money you save from not having the wireless card and get a better power supply, you will for sure regret not having a better PSU (that being said my $50 evga 500W non-modular is doing great). I see the lack of a CPU cooler which I can recommend and they are fairly cheap (I recommend the Cooler Master Hyper 212 EVO if it fits in your case). Also there are ways of getting windows for free or very very cheap just ask around a bit on the forums here... If you are a student then see if your IT department at your university has a dreamspark premium account and sign up for it, through dreamspark you will be able to get all your operating systems free of charge. Looks like a solid build nonetheless though! Happy gaming!

Well his build only draws around 330w at maximum load - plenty of room for GPU overclocking. The EVGA 500B is also not a bad performer - it's about on par with Corsair's CX lineup. Not stellar, but good enough.

I also find the stock Intel coolers do a pretty nice job cooling the CPUs at their stock clock speeds, so I don't think there's a need for an aftermarket CPU cooler. If he does want one though, a Hyper 212 will definitely fit in that Corsair 200R.

+1 to Dreamspark. There are also sellers on reddit.com/r/microsoftsoftwareswap as well as the Buy/Sell/Trade forum where you can buy Windows licenses for $15-25. That could save you a decent chunk of money.

Unfortunately the room the pc is in does not have ethernet so I need wifi. Also I do plan on upgrading to 1440p but that might not be for a while so should I get something like the 280x or even wait for the 300 series to come out? Also should I get a different power supply or will that one be good?

One of the biggest things I wish I could change about my build looking back on it (and I've only had it up and running for about a week) is that I wish I would have gotten a modular power supply. Especially with smaller cases or budget cases which may not have the best cable management. Mine kind of looks like a rats nest out of almost necessity because I got a non-modular and once my aftermarket cooler gets in I will have to route the cables across the top of the mobo and zip tie them to the top fan screw holes. Just trying to save him the time and effort by suggesting a modular, especially if he gets dreamspark or a very discounted (wink wink) copy of Windows that will free up some of his funds for it.

Alright then, looks like you'll be going the WiFi route.

Currently that power supply should work just fine. If you do get a beefier card, you may want to look into the 600w model.

As someone who is paranoid, I'd go 750w. Most people might not agree but getting a bigger one now will mean you can get a better gpu or SLI in the future without needing to update the PSU. If you look for something else make sure the PSU is from a reputable company! Also, definitely go modular if you have the ability to! 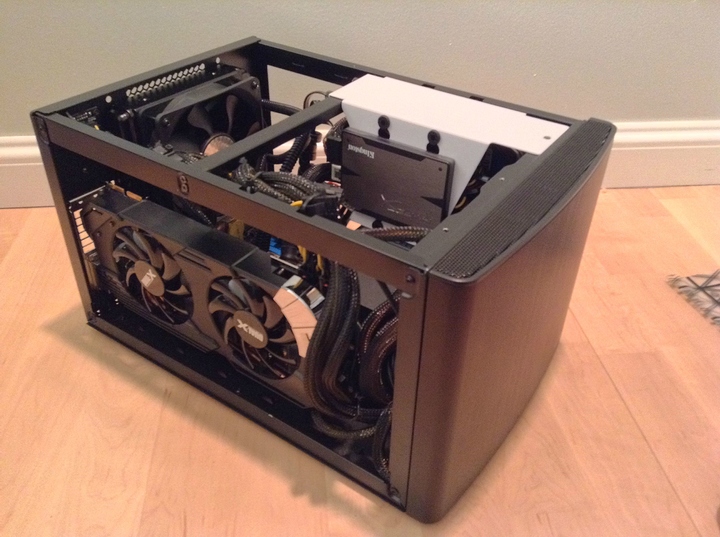 That's my main rig right there.

If you want to wait for the 300 series then that could be very beneficial as it will cause a drop in price on the 200 series (at least one would hope) but you will probably want a beefier GPU if you decide to go with a 300 series card. Other than that the build looks great man! Make sure to post back here when its all done so we can get a good look at her/him!

SLI on a H97 motherboard?

You sir are a fucking god. Thats pretty incredible cable management right there, hats off to you sir.

Thanks for all the feedback. I will definitely look for a fully modular power supply and I think I will wait for the 300 series. If nothing else there will be a price drop in the 200 series which will help me save money on my build. Also that is amazing cable management some_tech_noob. Really well done.

One last comment from me: If you want to go SLI in the future and this is going to be a gaming rig primarily then I would suggest finding a Z97 motherboard. Unfortunately I am not too experienced in the motherboard market to be able to make a good suggestion for you but some research on your part should turn up some good ones. Happy building!

Thanks. I will also be doing some programming on this but it will be mostly for gaming. I too am not very experienced with motherboards so I will look further out of it. I probably wont sli. By the time I want to upgrade my graphics card it will likely be more beneficial to buy a new graphics card and repurpose the old one in a different build (or maybe as a coaster)

I would pick up a windows key off the guy in the for sale forum it'll save you a lot and it's legit, I bother two, and maybe pick up z97-ar