In the beginning there was a CPU… bought on a flash sale, the i5-10600K.
I thought to myself “It can bring me joy.” and asked the community for support, and heed my call they did.
This is my first PC build and You are welcome to check it out!

Name of the beast

It’s purpose is to provide me with entertainment and play games at 1080p 60, or greater, FPS. I currently use a single 144 Hz monitor and play mostly older AAA games, with WoW, LoL and Overwatch mixed in. I upgrade on a 5 year-ish cadence.

The thought of building a new PC occured to me when my i5-6300HQ/GTX 960m laptop struggled with Rise of the Tomb Raider.

With the help of reviews, YouTube videos and this very community I came up with the parts list below. 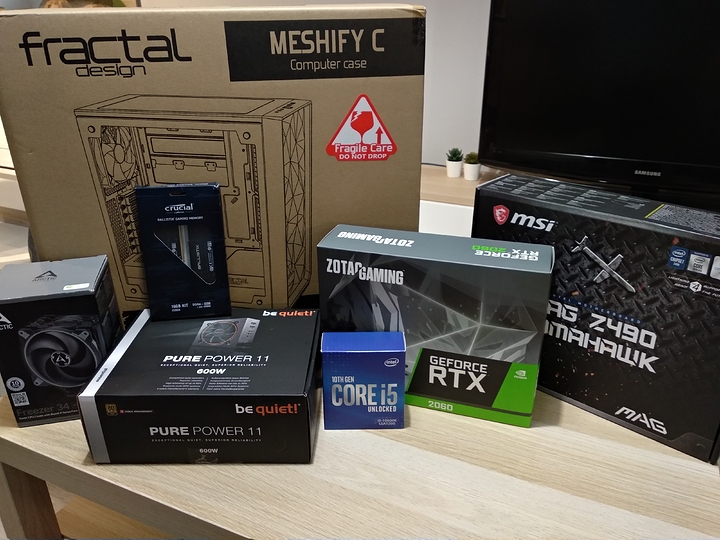 It all started with unboxing and setting up the motherboard, CPU and RAM. Hopefully I have watched enough LTT videos to not drop anything.

I have lined up the symbols on the CPU and socket, put it in, given it a wiggle.

But pulling the CPU retention arm back down required too much force for my liking. I have heard some scratching noise, but I hoped it was not the pins, but the IHS.

I have proceeded with satisfying clicks of two RAM sticks. Side note, the appearance of the MATT black heatspreaders is just awesome.

Next up was installing the tower cooler. I opened the box and found out that the instructions are online only, inconvinient but ok. 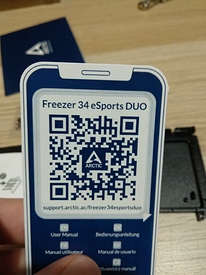 Artcic does a good job on those animated instructions, though. They are easy to follow. I had only a problem with fitting the brace around the backside of the socket. It may be just manufacturing tolerances of the plastic part. A push helped to get it in place.

Applying the included thermal paste properly (from a sauce bag) was not the easiest, but manageable. Screwing the cooler onto the installed posts was both the most enjoyable and doubt inducing part. Did it spread well? Did I not overtighten it? Will I crack the die? 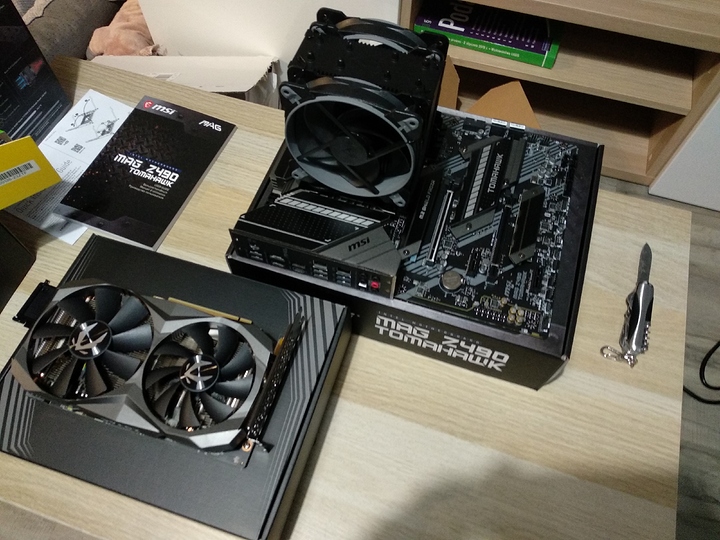 Working with the case was pretty straight forward. Remove this, screw that, install this way, the other way. Good.

I did leave the drive cage in the default position. I installed the semi-modular power supply without inserting the required cables first, did bite me later.

I now understand why people hate the USB 3.0 internal connector. IT IS A PAIN.

Additionally in my case the cable grommets/chassis puts tension on this connection and the motherboard made a noise, as if ripping off the connector, every time i touched the cable in question. I decided to leave it as is, because I feared if I try to remove it I would break entirely. 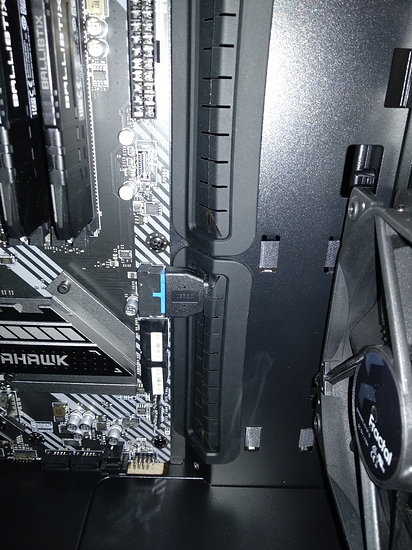 All other connections and cables were easy to work with. Maybe SATA was a little bit irritating, but nothing close to internal USB 3.0.

I have used the included zip ties to tidy up the cables a little bit. 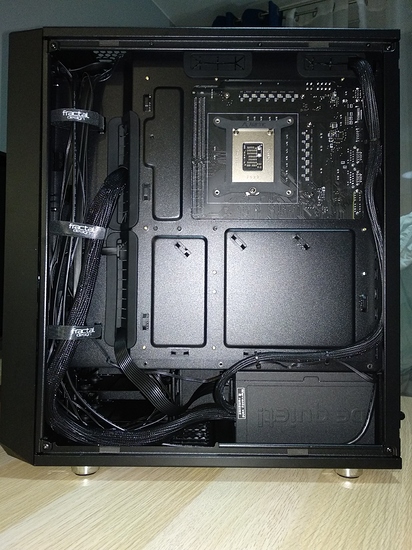 This was probably the easiest component to install, just after RAM. I have opted for a 2-fan card. The single-fan cards were cheaper but I had the room and wanted something quieter. Longer card, bigger heatsink, less noise, right? 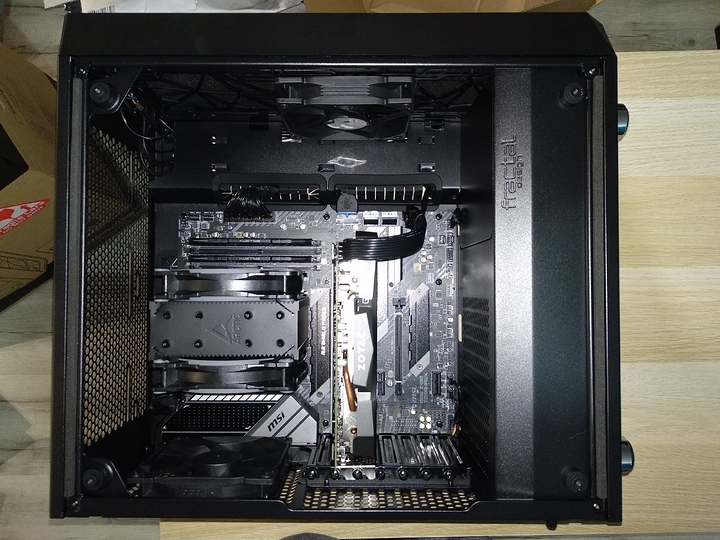 On this particular Zotac RTX 2060 model the GeForce logo is just a glossy sticker, while the Zotac logo is painted on the shroud. I had to rip the glossy sticker off. The card looks much better without it. 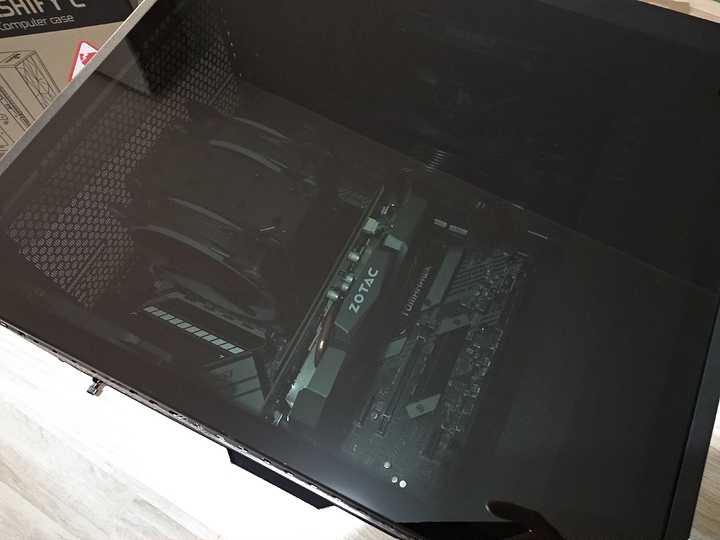 It booted on first try! Windows from the transplanted drive needed some time to adjust, but it worked, somewhat…

The issue was with CPU behaviour. It would not go beyond base clock and Task Manager or HWiINFO would show clocks from the previous CPU, the system was installed on.

This meant FRESH INSTALL! Finally a reason to do it after more than 5 years.

The clean install of Windows did solve the problem.

I went into the BIOS, disabled GAMING mode for the CPU (why is this enabled by default anyway?) and enabled XMP.

I have loaded up the monitoring software and checked the CPU thermals with a longer Blender render. The CPU does not break 70 degrees Celsius and fans do not go past 1000 RPM. It is practically inaudible.

The Arctic eSport (cringe!) cooler was a good choice. I have only adjusted the fan curve and made the ramp down slower, so it wouldn’t be in this state where it goes 400 -> 1000 -> 400 RPM constantly. I have ended up with this:

This one is a little tricky. At idle the Zotac RTX 2060 is inaudible, but under load the fans modulate their RPM. Even setting a custom fan curve in Afterburner does not solve it. I assume it probably is something tied to the cards BIOS.

And yes static insert number% fan speed is not static either.

It irritating at first, but when I get emersed in a game I forget about it and hear it only occasionally when the action stops or slows down. Not really a problem, though. The card reaches maximum 77 degrees Celsius at 63% fan speed. I do not have the euipment to measure noise levels, but I can say that this is the only component int he build that MAKES NOISE. Triple fan design next time? Or maybe water cooling?

The Meshify C comes with two 120mm, that spin at a static 1000 RPM. They make a slight whoosh sound. It is pleasant to the ear, no complaints here.

More or bigger case fans could help lowering the peak RPM of the graphics card, but wouldn’t solve the modulation issue. So I left the setup stock - 1 intake front, 1 exhaust rear.

As expected, the GPU is the deciding part of the build, for now at least.

I have played some games with the Afterburner OSD to see the CPU utilization. The highest was around 50% in AC: Valhalla. This led me to the decision of not overclocking the 10600K just yet. Less powerdraw is better for the environment.

I am quite happy with the performance in the titles I play. I did experience some stutters in Valhalla, but it was very minor (2 hours of gameplay, and noticed it only during first missions with a lot of cut-scenes).

After turning the performance metrics off I am pleased with my new gaming system. Oh and have I mentioned I can now play Shadow of the Tomb Raider? It is stunning.

I think I made the right call to build a system with accessible components. I am happy with the build and am enjoying playing WoW: Shadowlands with my wife. If I had waited longer, there would be no build. Big thank you to all who engaged in my previous thread and encouraged me to proceed. 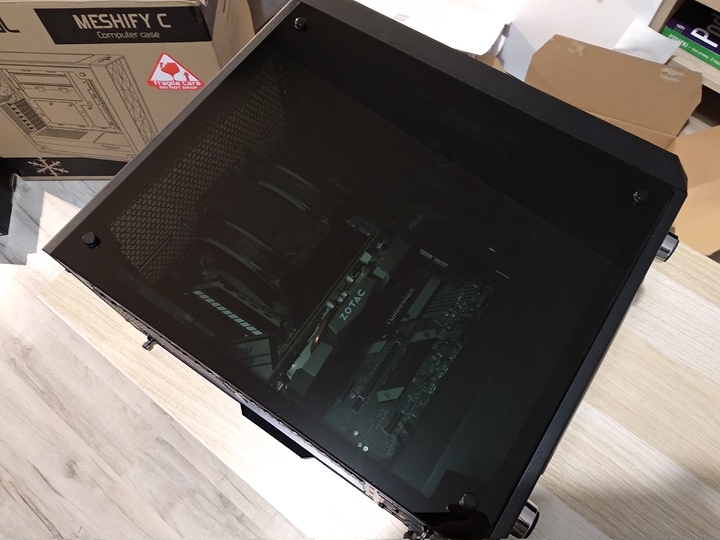 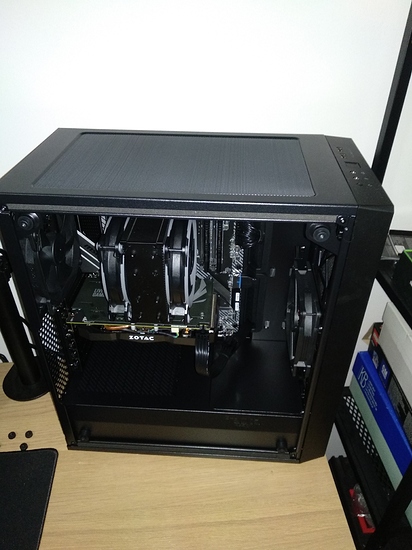 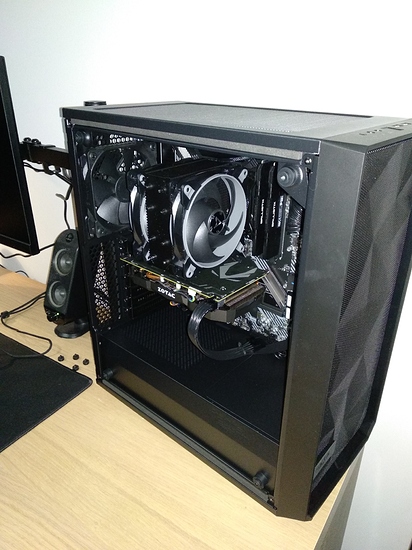 Next build log coming probably in another 5 years. Stay tuned!

Enjoy gaming during the holiday season.

Enjoy gaming during the holiday season.

I most certainly will!

Hey nice one! Looks good all round. Yeah it was good to go with what you had, any waiting would have been forever with the current state of things. Now you have a nice system for the holidays and it works great.

I wish you many happy, trouble free hours of gaming.

Have fun with dust on what used to be black surfaces

Thank you all for the kind words!

Have fun with dust on what used to be black surfaces

Yup, and the dog in house does not help

Grats. I’m not gonna go all negative on Fractal Design, so I’ll ask is that the thick foam filter on the front? Those are pretty good at keeping dust away. I have a fractal foam filter case and I clean it once every couple years and it’s perfectly fine…
How audible is the 1000rpm Arctic? I’m kinda tempted to get one…

is that the thick foam filter on the front?

Yes. When I popped it open a wall of dust separated from the front, so I guess it is doing a fine job.

How audible is the 1000rpm Arctic?

Very clean build and very well done with the build log! Enjoy your time these holidays