I wonder.. Can you use the server chip in the same slot as the 8 core? Any benefits in doing so besides having 32 cores?

ECC support if the memory controller is on the processor.

The problem would be chipset support - a low-end chipset may not support the server processors, much like Intel now with Skylake Xeons - you need a C-series chipset for those, whereas you didn't need one in the past for Socket 115x xeons.

The consumer chipsets don't support very many PCIe lanes, and I'll bet anything that the server processors AMD has in store will have far more lanes.

Nice! Maybe I can get my boss to get new workstations when Zen drops!

ECC support if the memory controller is on the processor.

Can you use the server chip in the same slot as the 8 core?

I doubt that. I mean i don't know, i just suspect it's a completely different system design.

What are the vegas odds on them releasing a platform with on-die HBM for server CPUs?

miniscule unless they intend to go the Iris Pro-style route where it's used more as a smaller, ultra-fast cache. Servers and workstations usually need large, expandable amounts of system memory rather than small, insanely fast pools of it, unless they're in financial institutions - in which case the 60MB-Cache Xeons are what companies will use.

fair enough. maybe it'll make it into an enthusiast platform that is yet to be released. god knows they have connectivity and feature headroom in the high end.

AMD has stated that the Zen and Vega Based APU's will have HBM memory cooked into them.

I assume it wont be all the APU's but probably the high end APU's will.

Can you use the server chip in the same slot as the 8 core?

Was a leaked photo of Naples a while back and the chip is physically larger than the 8 core part: 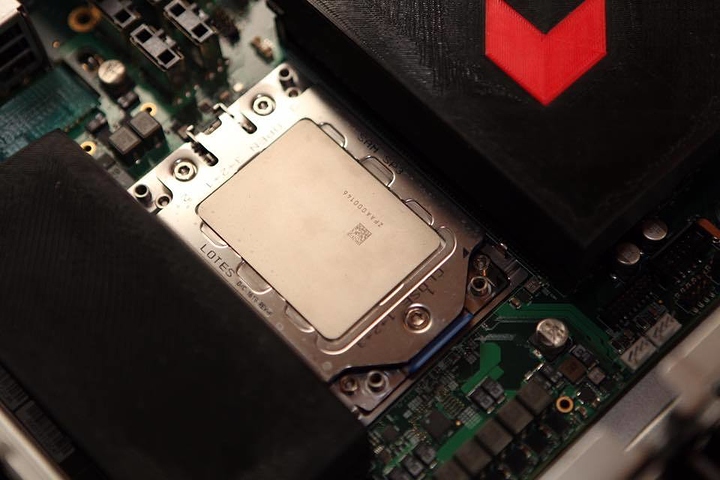 that also looks like an LGA socket, which in all probability translates to "Hell Naw"

Yup, its probably socket G34 or something similar.

A year ago I said I'd eat my shoe if this happened in another tread. Guess I better get ready to eat some rubber. I bet its 8 of the RyZen chips duct-taped together under a heat spreader.

Skylake-EP is also supposed to have up to 32 cores. 28 cores is the rumor on E5 while E7 is supposed to get all 32, which would follow with the trend of Broadwell-EP E5 being 22 core and Broadwell-EP E7 getting 24 cores. Both Skylake-EP and this Zen 32 core part are releasing in mid 2017, so it'll be a true head to head.

It'll really be an interesting comparison Zen 32 to Skylake-EP 32. You can bitch and moan all day about Intel's mainstream platform, but you can't say anything about them not advancing on the server side. They went from 8 core to 32 core from 2011 v1 to Skylake and LGA 3647.

I mean it makes sense. The average consumer still couldn't saturate sandy bridge if web devs weren't all woefully incompetent, whereas the enterprise needs everything at macro scale, in the most efficient, small, and powerful package possible.

32 cores 64 threads. By the power of Greyskull.

What do people feel the chances of dropping in a 16 core Zen chip in a AM4 motherboard would be?
I haven't really taken a lot of notice of AMD recently but Zen looks promising.

16 core looks to be server only territory at this moment. 8 core seems to be as much as the desktop will see, for now. AM4 is commited as the go-to AMD socket until 2020, so there is time for AMD to introduce skews in the next couple of years with more than 8 cores. 10,12, 14, or 16, are all in the realm of possibility.