Pretty much starting this because I’ve seen other peeps do it here and I like to ramble about my hardware, may as well start a smol blog to keep track of my extremly chaotic hardware situation. This’ll mostly be me spending too much money on hardware from 2009-2014 and generally mucking around with it.

That said, I’m trying to solidify a rig idea for a pair of GPUs I have arriving thursday. A pair of EVGA GTX 780 Classifieds, which I was going to very wisely cram inside a Meshify C Mini along with an EVGA X58 Micro and X5670 or i7 950 (depending on what I felt like slapping in the socket at the time).

T2 can’t really fit in the Meshify C Mini unless I chop out the lower fan mount though, and it’s a brand new case so I’d rather not. It kinda bulges a bit if I do try and force the PSU in there: 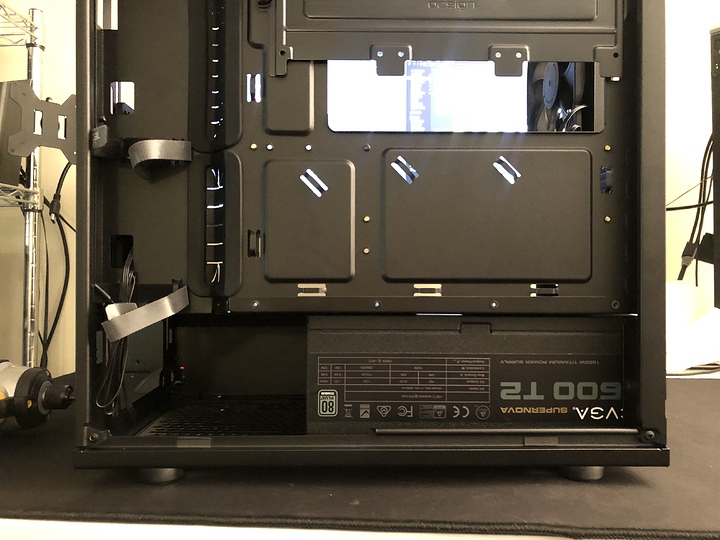 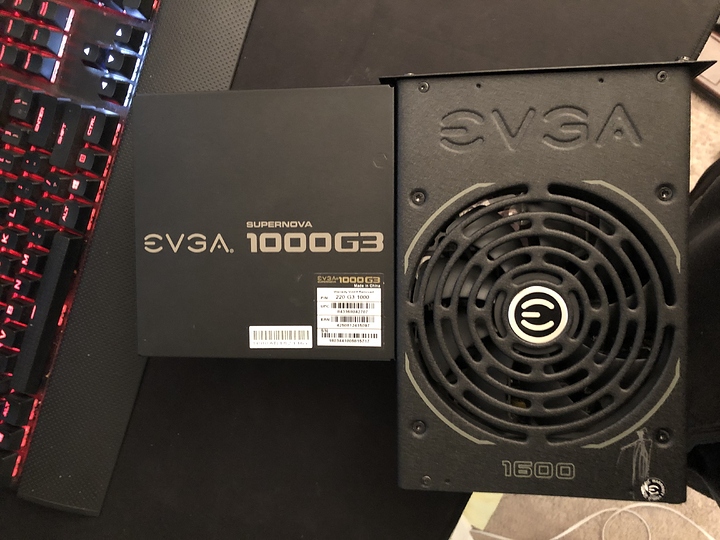 So basically the Mini C is out of the picture if I wanna avoid destructive mods. Leaving me with my Define S or Air 540. If I’m using a larger case I may as well use a larger mobo though, meaning I’ll likely use my EVGA X58 Classy SLI 3-way. Define S apparently requires slight mods to fit it though, so currently I’m thinking of this (replace the 990X with an X5670/75 or if I’m lazy an i7 950):

I also have noice Carbon ModMesh cables from CableMod for my T2/G3. Also need to contemplate going even stupider, if I pull out the 3.5" HDD bays in the bottom of the Air 540 I can technically fit my stupidly overkill EVGA X58 Classified SLI 4-Way (the XL-ATX lad), but I’d need to find a way to support and secure the bottom edge of that mobo.

Main advantages of the 4-Way are that it’s dumb thicc and I’ve already done the Westmere-EP mod to it (both Classies are V1.0s and don’t support Westmere-EP without a hardware mod), and I know it’ll push my X5670 to 4.5-4.7 easily with proper cooling. Here it is in a makeshift test bench I ran for a while with a 1080 Ti, perfectly balanced GPU for that CPU: 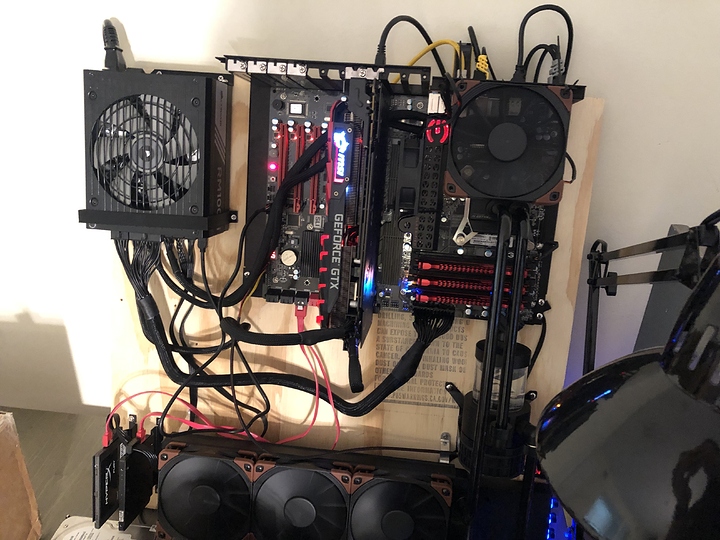 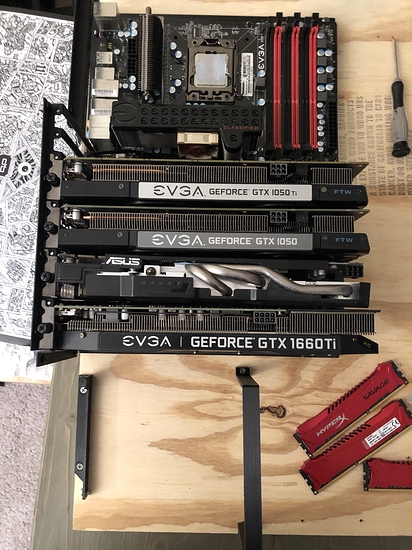 Still proooobably going to go with the EATX board, assuming I can be arsed to track down the EVGA forums thread and pull the heatsinks again, then dig up my soldering iron and fix it up for Westmere-EP chips.

Seeing as the 780s haven’t arrived yet, slapping a smol lad inside the Meshify C Mini: 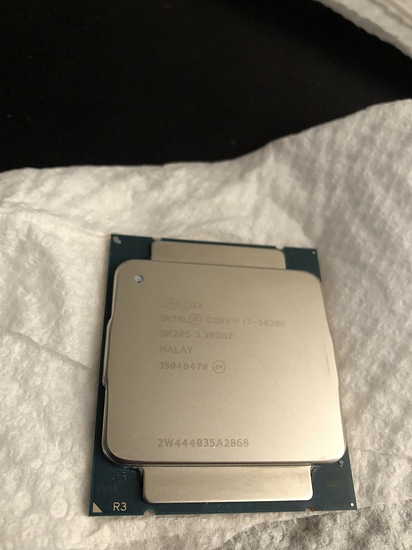 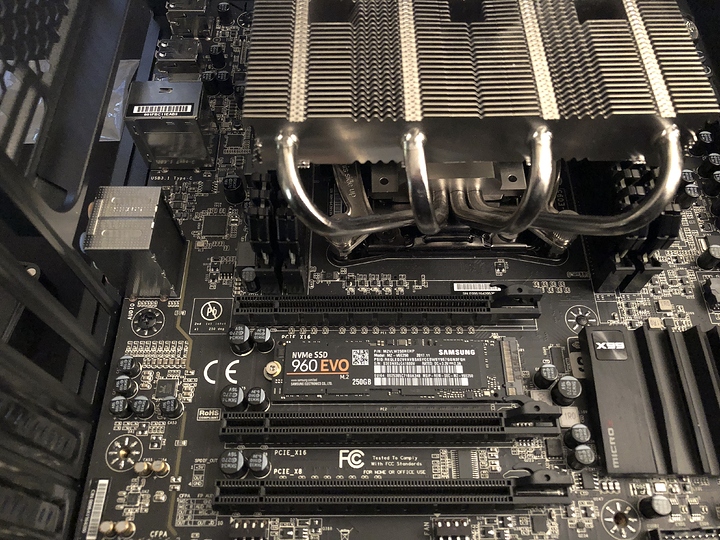 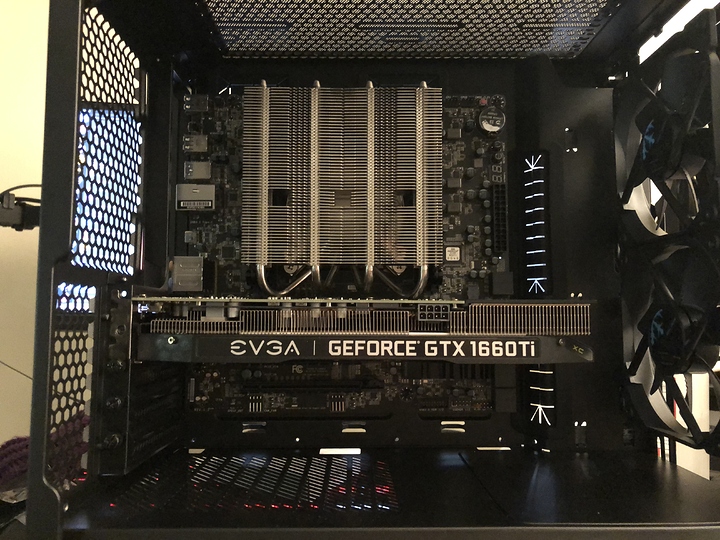 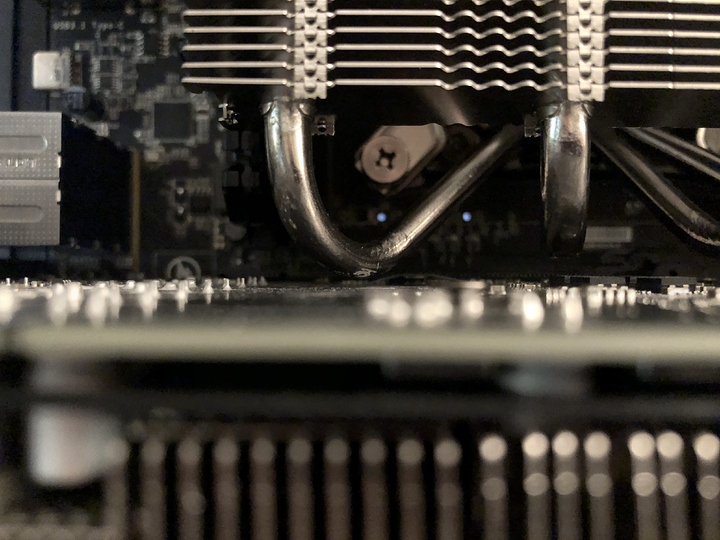 EDIT: Oof forgot the RAM, it’s 4x4GB EVGA SSC 2800Mhz DDR4. Yoinked it off a lad on Reddit because he had it for a good price and I’m a slight EVGA fanboy.

Man, those Westmeres most certainly need mitigations=off or the GRC Spectre/Meltdown tool for Windows.

Also, be careful not to blow up the IMC on the 5930K as they blow up super easily.

Man, those Westmeres most certainly need mitigations=off or the GRC Spectre/Meltdown tool for Windows.

Yeah I need to remember to do that when I get the X58 kit up and running again, lol. Will be interesting to see what kind of difference it makes, I’ll try and bench both before and after.

Also, be careful not to blow up the IMC on the 5930K as they blow up super easily.

Speaking of which, progress was made: 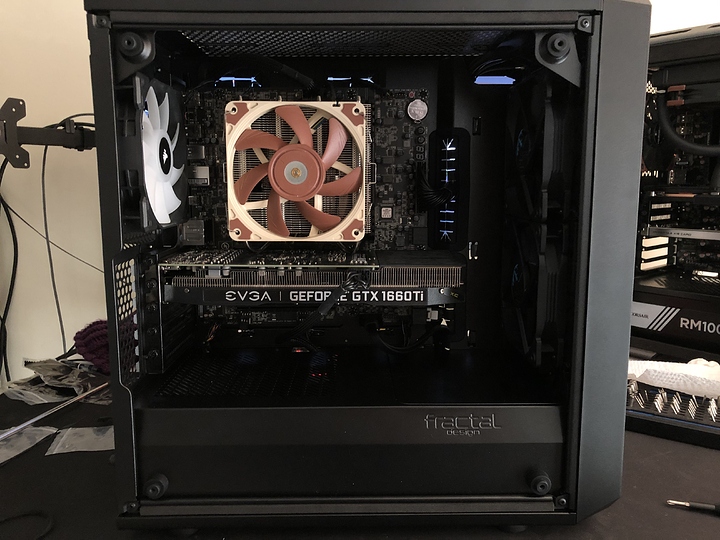 front.jpg4032×3024 1.36 MB
It commit fit, also peep the random Corsair RGB fan I don’t actually have the controller for so it’s just a white fan now. 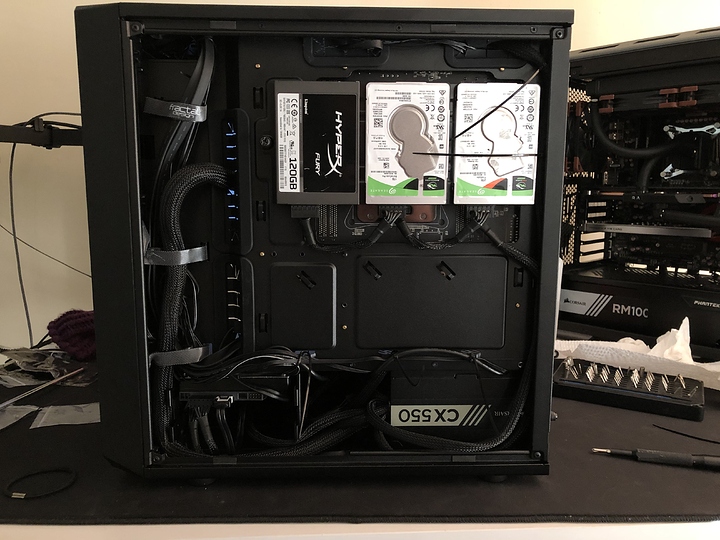 They were supposed to be here Thursday too, not gonna complain about it being 2 days early.

Hate to break it to ya, but even XMP can blow up the IMC on Haswell-E.

Really? I’ve only seen people complain about the IMC dying when trying to OC RAM and pushing higher voltages. XMP runs at 1.35v on my 3200Mhz kit, IIRC it’s lower on this lower clocked kit. I ran this 5820K for a while with my 3200Mhz kit as well without a single issue, it’s only in this rig now because I got a 5960X for the main.

5960X are where the most CPU death reports are. Just using XMP has killed CPUs in Haswell-E.

Hmmmmmmm… All I’m seeing so far is ASUS boards pulling too much voltage when XMP is enabled (I run an EVGA board), and one guy saying he killed his own Broadwell-E chip on an MSI board, and had two killed by an ASUS board through no fault of his own.

Some stuff on different BIOS versions being better or worse? And yet more on ASUS boards (especially the original RVE) having issues and cooking 5960Xs.

Aaaaand some more where an RVE cooked specifically the IMC (stock speeds, workstation use for 2 years), OP pulled the 5960X and had issues with it the whole time they had it.

Do they just suddenly up and die or does it take a while? 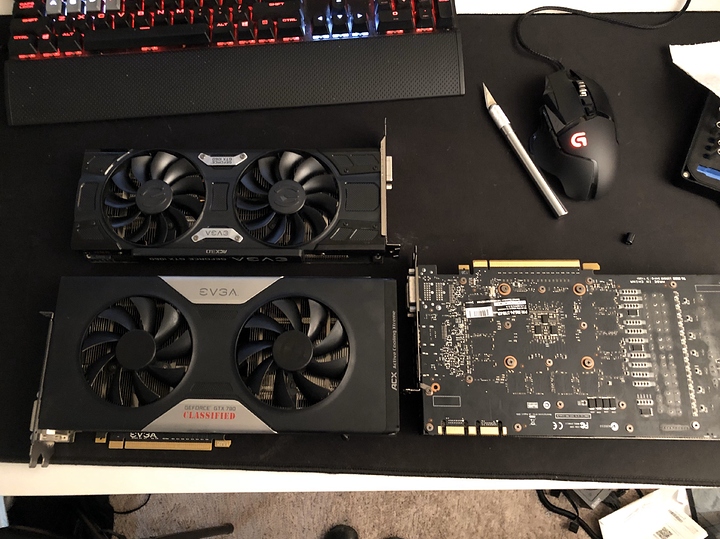 Can’t use them till tomorrow though, it’s cold out and they sat on the front step for a while, need to get to room temp before I can put power through them because ye olde condensation.

Smol X99 PC is running fine. L12S actually keeps it cooler than I expected, at 4.2Ghz/1.2v it’s hitting a max of 77C after around 20 minutes of Realbench and some testing in Destiny 2 (holds a solid 75fps in massive patrol locations easily, which is just what I need).

Going to have it run Realbench overnight and see how it holds up.

Passed an overnight run of Realbench with flying colors, max temp of 76C. Running 4.2Ghz/3.4GHz at 1.2v/1.05v (core/uncore) with RAM at around 2667Mhz CL16 or so. Had no performance issues so far either, may start using this instead of the main rig due to less noise and power consumption. 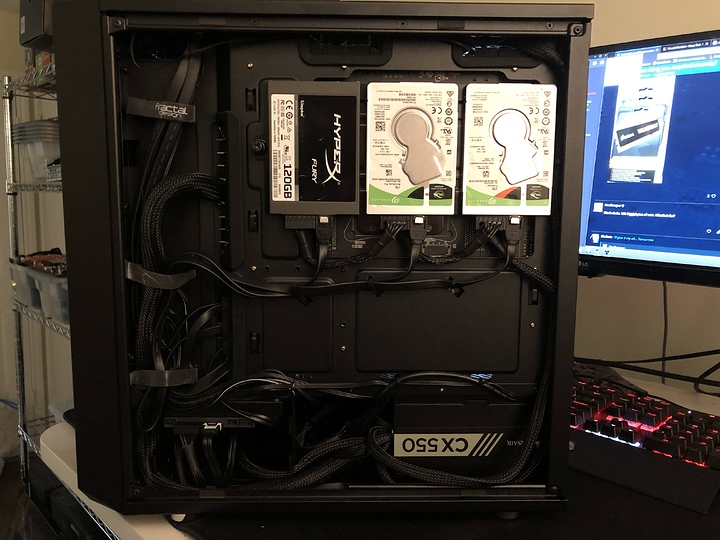 That aside, the V6 GT is beefy af: 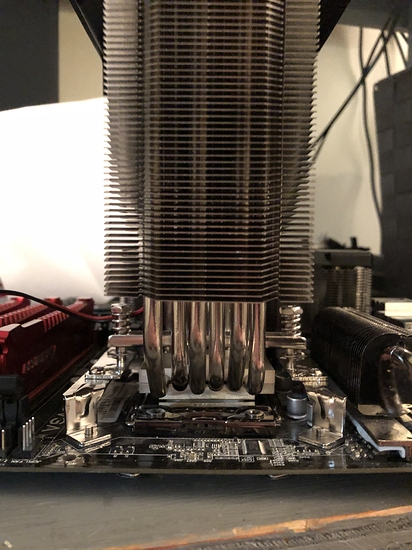 Also illegally fitting the XL-ATX Classified SLI 4-Way into the Air 540 (says it supports up to EATX IIRC): 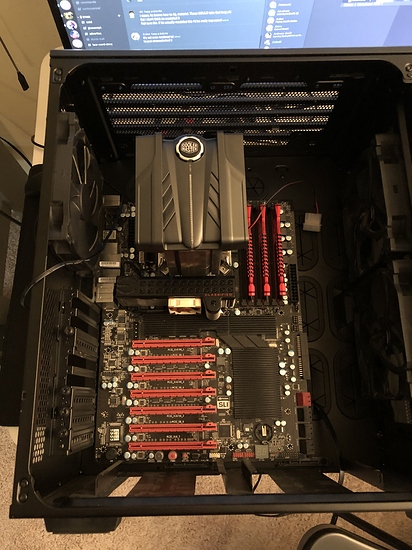 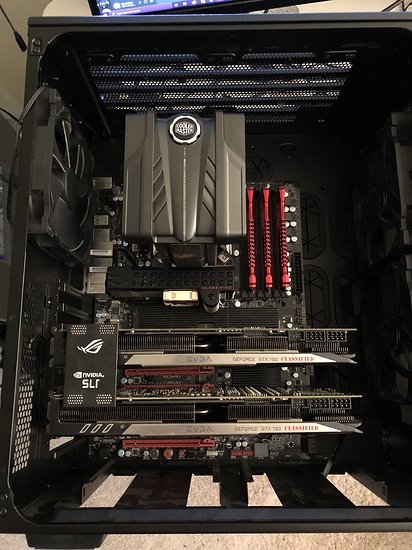 Should be good to go, just have to actually find the many PSU cables I need and make sure they’re the right ones for my T2 and not off some other OEM’s PSU. Note to self: don’t put all the cables in the same bin.

Case needs a dusting the bottom has finger trails

Indeed it does, lol. Motherboard has dust as well because it’s sat for a while. Once I get some more compressed air and some microfiber towels that don’t track lint everywhere I’ll probably give it a good cleanout.

Ye I may get one of the purpose built blowers (like a tiny leafblower or reverse vacuum, Amazon has them for like $50). Compressors tend to condensate water inside and then occasionally blast it out in my experience, don’t reeeeeally wanna spray water inside my case. Also the neighbors in the apartments above and below and across from me probably wouldn’t be fans of the noise they make.

Aaaaand rig up and running: 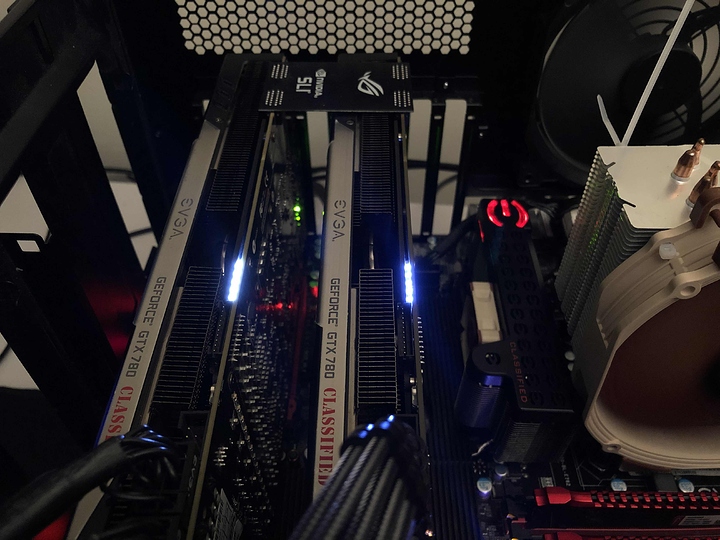 Everything was funky tho. CPU misbehaved, GPUs were wacky, but I did get a good Firestrike run at 1320Mhz core/stock VRAM/1.2-1.25v on the GPUs (they don’t wanna do the exact same settings in Firestrike anymore so I am bamboozled:

On to the wackiness: IDK if it’s the mobo or the RAM or what, but nothing wants to clock high. Tried with my X5670, which I ran on this board with both air and water, up to 4.54-4.74Ghz, now if I try and go past 4.3Ghz or so everything borks itself, it crashes on RAM initialization, and throws a no keyboard found error.

GPUs were a little funky but are fine now. Best I’ve gotten is 1320Mhz core, if I can do some tweaks software side I can apparently push 1.3+ through them, should get me to 1333-1350Mhz at least. Haven’t tweaked the VRAM yet. Top card hits up to the mid 80s, bottom card stays in the mid 60s.

Performance wise, it’s pretty damn good in games that can stomach SLI. 110+ fps in Battlefront 2015, around 140-170fps in Battlefield 4, and 68-75fps (75Hz monitor with V-Sync on) in Destiny 2 - but it randomly crashes there even at stock on the cards, need to figure that out. All at 2560x1080 and max settings (but medium textures on some that can’t fit ultra textures in the 3GB of VRAM).

Oh and also I’m running Windows 7 because I tried some different RAM to see if that was the issue and Windows 10 just consumed it (and yes that’s a Gammax 400 with the fan off a Noctua NH-D15 on it because the nice thicc coolermaster is agony to remove when I need to reseat stuff, and the Gammax uses nice push-pins).

Check again with 200Mhz BCLK. I know on P55 there’s a BCLK hole that if you push past will mean stability is re-gained.

Yeah, I did try 200 and a bit over, but it doesn’t seem to like that. Also failed to pass an overnight run of Prime95 blend so I’ve upped voltage to 1.38v and it’s hitting a casual 97C

. May have been the source of my crashing in Destiny 2, not the GPUs. Could proooobably lower the uncore but like I don’t wanna, lol. Think I just don’t have the best bin on a chip, or I’ve lost my touch. This is the first time I’ve pushed an OC on X58 in what feels like a year? I think it’s closer to around 6-8 months though, I forget when I got into X99. Just checked my order history, yeah I got my X99 board February this year, so roundabout 8-9 months.