I thought it was sorta weird that there was no music tech thread on here. If there is I can't find it, although I did just join. I figured I'd post my guitar rig and encourage other people to post whatever they play/use.

My guitar is an RG3EX1. I've upgraded the pots and replaced the decent Designed by EMG stock pickups with a pair of Seymour Duncan Blackouts Metal AHB-2s, I've never had any problems with the guitar, despite being one of Ibanez's cheaper series guitars it stays in tune. The only real issue is that being extremely hot active pickups the Blackouts eat through the 9V batteries that serve as supplemental power supplies extremely quickly, even compared to other actives. The Blackouts have so much output that the tone is constantly overdriven, which means I don't have to fiddle with many effect to get a nice pop for cleans and a good full sound when distorted. I'd recomend them only in the bridge though, as a pair isn't really necessary and there's no reason money shouldn't be saved in pairing them with a pickup meant for the neck position. My future guitar plans are to get an Ibanez S7420 7-string.

For strings I split the lighter of the Ernie Ball 7 string packs. I love the idea of thicker guages for the low strings and thinner for the high strings, but didn't like either of their packs. The drop tuning specific pack comes with those dreadful 24p 4th strings that cut like razor wire. Spliting the back gives me what I need for lower tuning but keeps the the higher strings extra flexible for big bends and pinch harmonics.

My amp is a Peavy Vypyr 120W Tube Modeling amp with a Groove Tubes GT 12AX7 pre-amp tube and a quartet of JJ 6L6GC Power Tubes. (Just got around to replacing them, the Power Tubes should be at my house by Monday.)

Feel free to share, guitar and music tech is kinda a guilty pleasure for me.

I own following guitars:

... and some more less important stuff.

D-sonic + Air Norton combo, seen a lot of people runing that. Was considering a cheaper version of the Ibanez S series and replacing the pickups with those. That Washburn is sexy. I love Washburns.

I used to have an Ibanez a while back but the thing was left in a damp house for quite a while and the entire thing just rusted over. I sold it while I could and proceeded to build this one! 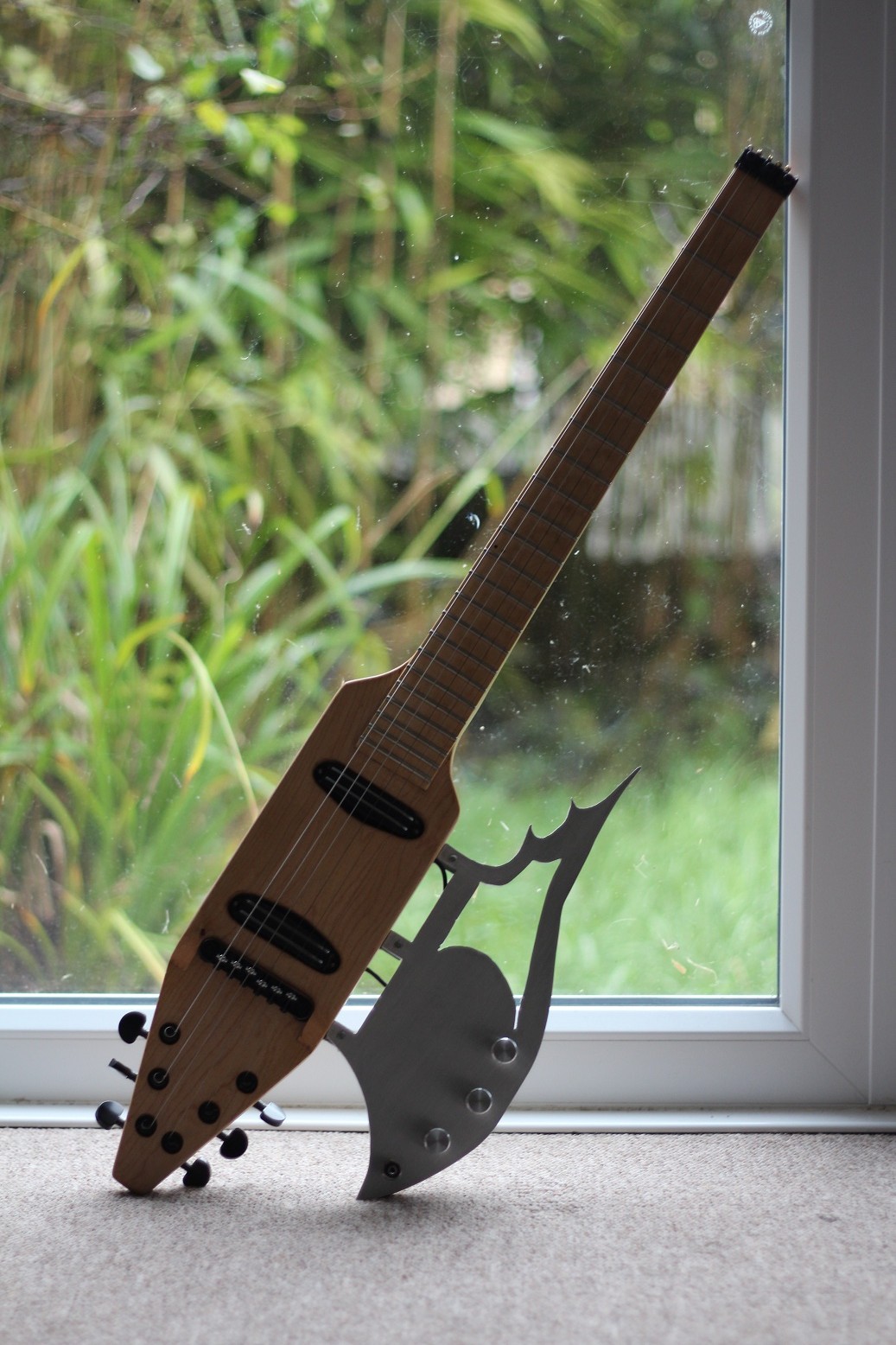 I still need to get a laser cut metal plate at some point. This one is hand cut and has some uneven edges..

It's held up for a year now better than my Ibanez did. It's much much lighter however it's easy to mess up the tuning because the tuning pegs always catch your elbow or hit the floor when you put it down.

This is a set of six 22W class D amplifiers that run my sound system. This entire panal mounts into the back of my subwoofer so it's all hidden. The amps themselves are kits from a company called 41Hz and are based on a reference design by Tripath. Each kit is 27 Euros. 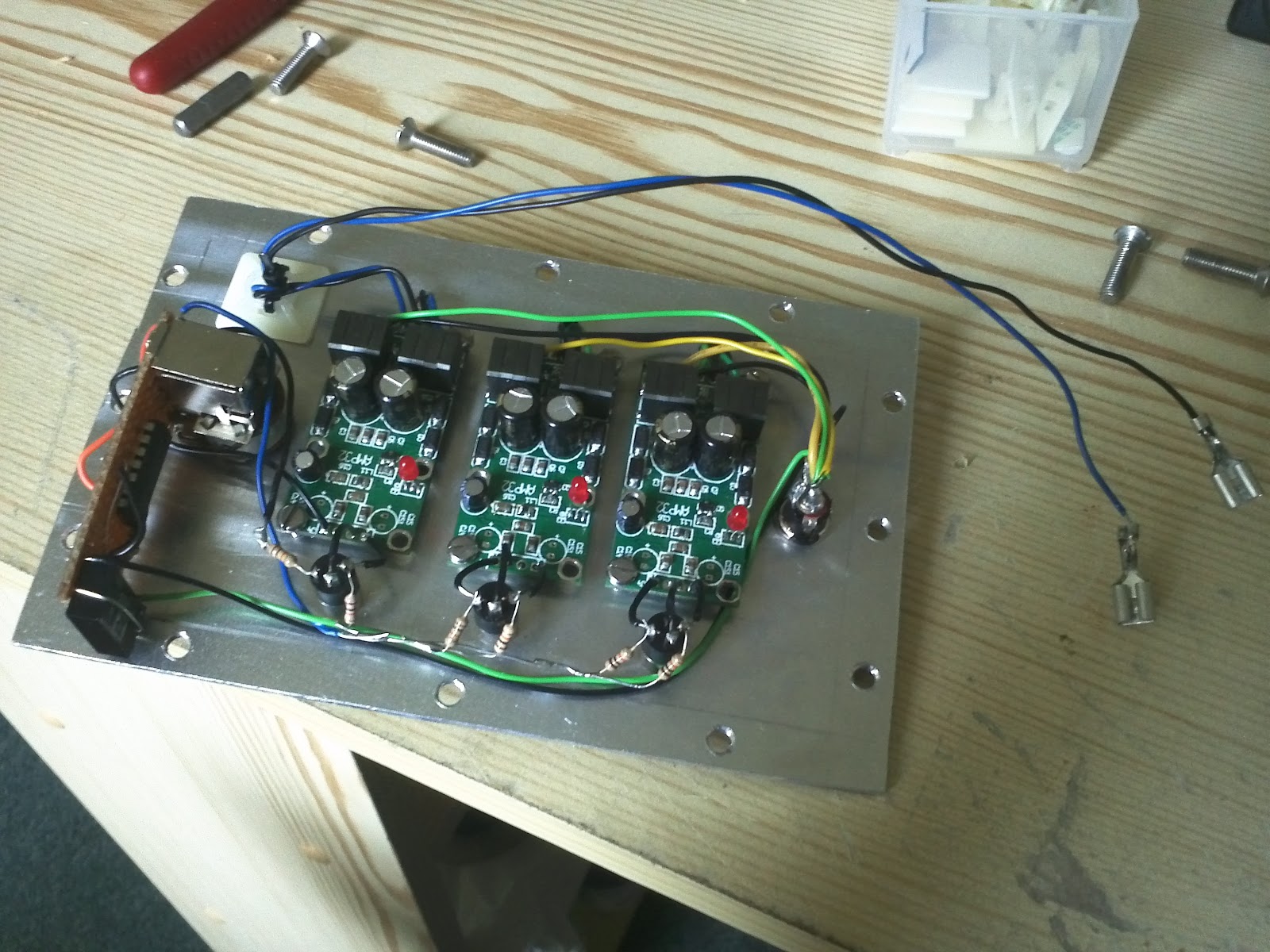 The subwoofer itself is this red box under my PC, The PC itself is my only machine for everything I do. Even works as a guitar processor! I use Guitar FX Box 3 with a preamp before i send the signal into the line in. Everything is just using onboard audio at the moment. Not the best but untill I find a good USB sound card, it'll have to do. 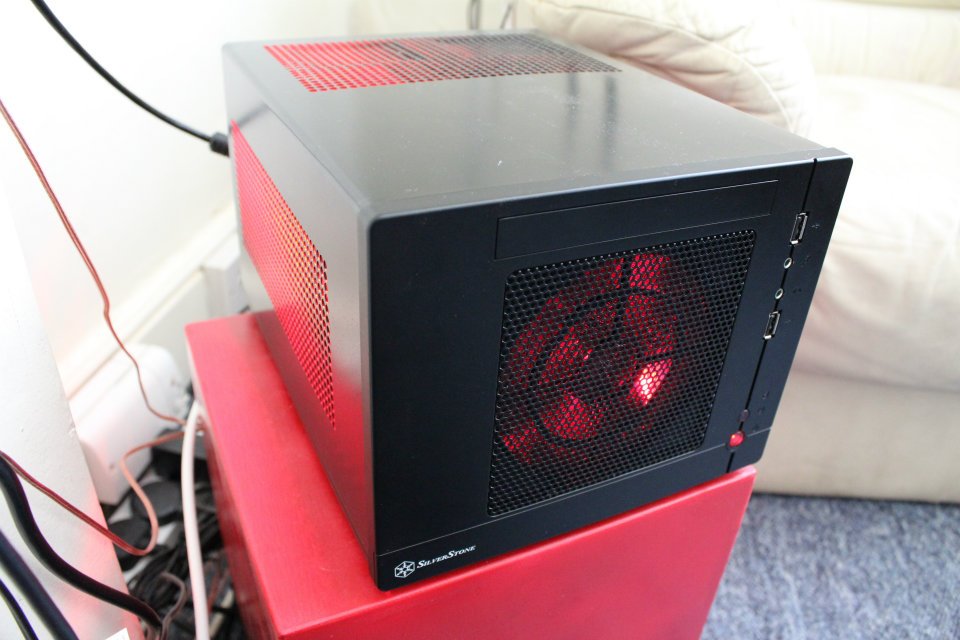 These are some dipole speakers I put together a while back. It's a niche idea but works well for me. The idea is that the subwoofwer handles frequencies up to around 600 - 800Hz. After that the sound becomes more directional to human hearing so these small tweeters fill in frequency region from 800Hz up to the moon. The fact that they are dipole means they fire sound in both directions front (in phase) and back (anti-phase). It essentially gives an ambient effect and sounds as if the soundstage is wider due to the extra refelections.

Overall it results in a very small footprint on and under my desk. they are the most natural sounding speakers I have heard so far (compared to the local "Audiophile" shop". I don't know who buys their £10,000 speakers but I'm convinced mine are a thousandfold better value for £8 each!) I do have to equalise the mids up a bit due to the lack of midrange drivers.

Might make a bigger set of open baffle speakers one day when I have a house and I'm not just a poor student. 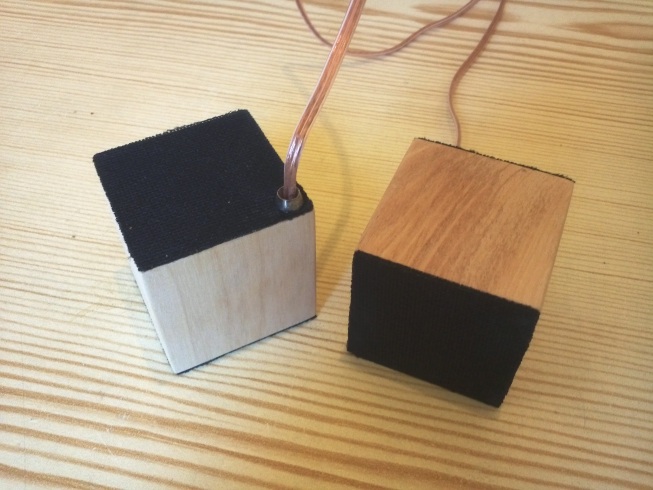 There's more build pics of all this stuff on my blog, just pardon the mess! :P