Your first car and what your driving now

My first car was a 93 ford probe it started out teal and during my senor year I got this great idea to put a body kit on it. at the time I had no idea how much work I just signed up for but luckily my dad used to work at a body shop so that was a lot of help. I owned the car for 7 years and sold it to a kid I grew up with because the tranny went out in my truck and I wasn't living where the car was at the time. he owned it for a couple of years and just beat the shit out of it.The car died on him one day and had a friend come help tow it, well they hooked it up under the front bumper (the frame) and the other end of the chain to the guys hitch. Obviously there was a height difference between the car and the truck so when the chain got taunt it ripped through the front bumper splitting it in half. I know that it was no longer my car but the work that I had put into to it and the good times that I had when I owned it still hurt seeing it in such state. I offered to buy it back in hopes of fixing it back up but instead he let it sit on the street till it got towed.

In 08 I bought a GMC Jimmy full-size, I had been looking for a truck to go wheeling in and take my boats to the ramp. I still had the car at the time so it wasn't my daily driver. I was having a hard time finding something that was in my budget and not a POS. Then I rembered that my cousin had one and wasn't driving it for reasons I don't remember. I called him up and asked how much he wanted for it and he said he couldn't take less then $2200, I told him fuck you I'll give you $1200 he said he'd think about. The next day I went to the bank and went up to his place pulled out the cash and said $1200. he looked at  me then the cash and said ok but give it to me after the weekend I'm going to the city and I know I'll spend it. since then I've replaced just about everything  and moved more then a few times, its still a great truck.

this is when a first bought it

this is one of the first wheeling trips I went on

Line-X acts like a chalk board so I used some sidewalk chalk on it last summer.

this year was the first year since I owned it that I took the top off. and in a truck with poor A/C this was a godsend

no car at the moment - dont need one

The first car I'd learnt to drive was a Humber Super Snipe similar to the first picture, but my dad's Humber was grey. 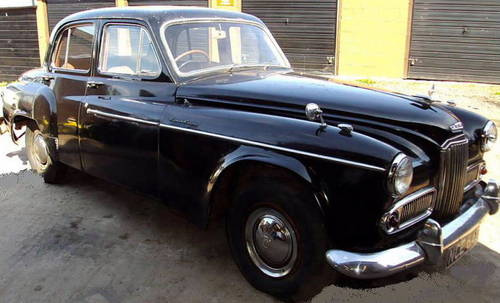 My next car which I'd purchased new, was a Daihatsu Charade (I loved this little car, and use to perform most of the servicing, and mechanical work myself) My little Daihatsu possessed a white duco with splash graphics.

My current vehicle is a Toyota Landcruiser Ute, which I'd purchased new; all the servicing, and the bulk of the mechanical work is performed by me (within the limits of my abilities)

My first car was Holden 1994 VR  SS Commodore. This one I bought and within 3 months the engine and gearbox decided they weren't going to play the game, so out they came, only intended to give the V8 and box a stock rebuilt....................... 660hp later that plan didn't go that well. As an apprentice mechanic at the time this helped out lots in how cars worked and got put together.

Current car is a 2003 HSV Clubsport R8, this car has the older LS1 out of the C5 corvette in it, currently getting a full rebuild (engine is going to LS7 spec, and converting to manual) and paint. now after a 15 year gap in good cars I'm doing it all again, now as a master tech and have access to all the proper tools and software to make sure the thing runs and behaves itself, the plan might survive.

First car was a Hyundai Accent. Piece of shit. It was a car that you had to drive carefully with as if you crashed it, the whole body would crumple. One of the most dangerous cars to drive. Also drove for a year a Mitsubishi Chariot. Comfortable ride. Little fuel thirsty but it was a large car. 2.8 l GTI engine went well until the seals went. Thing burned so much oil it would fill the streets with smoke and I mean you drive off and you cant see anyone behind you because the smoke is so thick. Hell an RX7 wouldnt be able to consume that much fuel even if it tried. Luckly got it warmed up to the point it didnt smoke and sold it to a rental company for 4k. Not before someone drove into the side of it parked on the road. Didnt leave any form of contact or insurance info. Just drove off.

Dont currently own a car (though when money issue is sorted ill be importing an RX8 from japan) However parents own an 06 Honda Jazz (Fit) and a 2013 Suzuki Alto. Drive them when I need a car but mostly take the trains. Cheaper anyway. Parking is a bitch in the city.

My first car was an old Volvo. I so loved that car.

I'm tempted to get the new Golf GTE, but I feel like it's probably not a good idea to get a first gen of a car like that, but I like the idea of driving a car that's less conspicuous and more compact.

Current Car: Toyota Verso 2.2D T180 sensible family car that redeems itself with a peach of an engine.

Damm that Humber is a nice car. ☺

Unfortunatly i dont have the money to buy my own car yet. So im doomed to drive my dads Mercedes S-class with AMG looks....

And i have to say, its not realy a fun toy to play arround with.

My first trunk was a 1990 GMC sierra, my current truck is a 1996 GMC sierra, shortbed. And yeah, they may seem similar, but they look and handle completely different. I love my current truck, heres it looking nice after I spent a few hours washing/waxing it.

Cool truck, to bad they use too much fuell for European standards lol. ☺

haha.. poor you with your non-AMG S-Class...

no one feels sorry for you... lol

its not too bad...I get around 19-20 mpg (I don't remember the conversion for you guys) thanks to it having a V6 instead of a V8. I commute to university with it, and usually get around 400 miles on a tank.

400miles is arround 640km, how much fuell goes in that tank lol?