Xbox and pc audio together

Hi everyone, I'm a newbie in this huge community (and also I'm Italian) so please don't hate me :)
I tried asking on an italian forum but I still haven't received any answer.
I wanted to ask you a few questions.
This will be my setup (hopefully soon): TV, xbox 360, pc and headphones. Both the xbox and the pc will be hooked up to the same tv. I don't have a set of speakers but I'm planning on getting one.
The computer I'm building will be used for listening to some music, gaming and watching movies.
I just want to hook up my pc and xbox audio outputs to a single source such as a sound card or external dac.
First question: is it possible?
Second question: do I need a soundcard or an external dac?
Third and final question: will you be so kind to help me with the choice? I have a budget of 2-300 bucks.

Thanks in advance for your help.

I believe you just need a DAC with multiple inputs. Not sure how well Xbox works with USB DACs, so I'd recommend an optical input for the Xbox and an USB for the PC.

Using a soundcard for Xbox audio would be impractical since it's in your PC and probably only has a PCI(e) input for digital audio.

Here's a DAC+AMP combo with USB and optical inputs for 210€:

Thanks a lot sir, you solved almost all of my problems. I have two more questions to ask you, though.

First one: is the creative sound blaster x-fi hd suitable for this job? Maybe I'm just a noob, but I've heard the brand creative before, and unfortunately not the one you told me. I just ask because I was searching around and some people talked very well about the x-fi hd, and I believe it has the multiple inputs I need. (does it?)

Second one: if it suits the job, is the x-fi any good? How does it compares to the other one?

EDIT: I just want to be sure none of these things will distort or delete the surround sound coming from the xbox; I want to be able to play battlefield, for example, and hear things like I have a gaming headset.

You will either require an integrated DAC (as mentioned above) or an AV receiver if you go with passively powered speakers either way will run you around $300 ish on the low end. Buying used isn't a bad route either.

Thank you sir, is there nothing I can do to lower the price?
Let's put it this way: what inputs do I need to be able to listen from both sources? 1 optic in (toslink) for the xbox and 1 usb in for the pc aren't enough?

Well you could run both machines to the tv via HDMI and send audio to the TV that way. And run one Optical/Digital Coaxial to a DAC. But most lower end DACs are around $250-350. You could cheap out and just use the TV speakers or maybe a sound bar speaker which at the the really low end is around $200

Thanks again sir: if that's the only way, then I'll wait until I have more money to spend on a good dac.

A reactive r would be more flexibl it can do video switching bad well as audio. Denon, Yamaha, Pioneer and Onkyo are all good brands with products in the $300 range and Passive speakers are much better for the price over powered speakers until you get at powered monitors but those are quite pricey.

So the big differences between a dac and the receiver are 1) the receiver can handle video too, and 2) the receiver can power a set of passive speakers, right?
I don't mind plugging an extra power cable, if that's the deal. I'd rather get a little thing that can do less instead of a big thing with hundreds of ports that I won't use.

Either way you should be fine. I guess I just perfer the sound of most passive speakers over powered.

Before you buy anything try to listen to it first since sound is very opinion driven. Or make sure whoever you buy it from has a good return policy.

I'll do it for sure, thanks for the advice.

For the sake of argument, let's say I choose and buy an external dac. What's the best way to hook it up to both my sources? 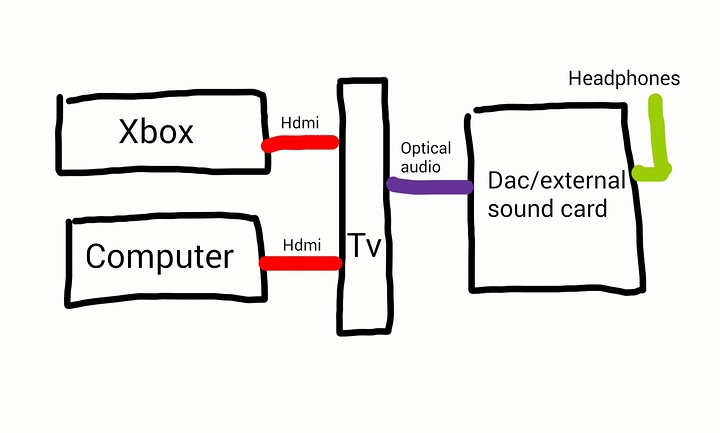 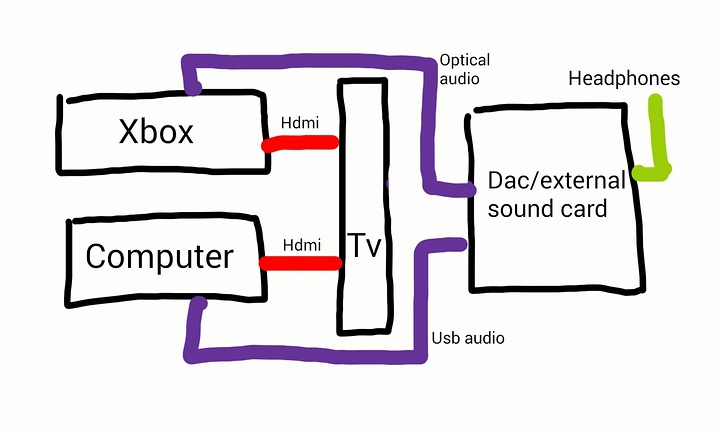 Sorry for the bad drawing but I'm doing everything on the phone right now.

I forgot: my future speakers, either powered or not, will be hooked up with rca cable, right?
I know these are noob questions, I just want to know every little thing so I don't mess things up.

Digital is digital so it be fine either way. If the DAC you get has asynchronous USB then plug the PC in directly.

Thank you very much sir, you are very helpful.

I have another question.
I read on another forum that a dac can't "send" a surround sound to my headphones because he doesn't process it. So my question is: how can I hear surround sound if the external dac doesn't let me hear it? Do I need some other source to process it?
Excuse me if I get too insistent.

Perfect, so either a sound card or an external dac will send the virtual surround through?
I mean, I can choose both as long as they have the inputs that I need right?