strange i didnt already have that in ... k lol

Yeah well Ryzen is to good to deny for productivity in terms of price to performance,
if you forget about the 1800X for a second.

However yeah, if topic starter needs more pci-e lanes and Thunderbolt,
X99 is basiclly gonne be the best option.
However its not the most economical option.

However its not the most economical option.

Yep the risk with Es chips is that they might not work well on certain boards.
Or there might be some other weirdness like not fully turboing or what not.
Thats the risk of buying into Es.

Some closing notes on this thread:

First, I will go with the Ryzen 7 X1800 and the X370 platform. It is a total waste of money for my project to go with the X99 chipset, as I do not really need that much lanes; sure, it is incredibly expandable, but I don't want/need to spend that much money.

In order to be able to saturate the 40Gbe link I would need to have some kind of RAID 0 with the NVMe disks, but if I go with the Samsung Evo 960 Pro I will get close to what I would like to do.

alistically are no issues running SATA+M.2. Also Dual M.2 is simple enough. x2 to x4 in SSD speds... really, unless you have some insanity with 4GB+/s on each drive theres not a bottleneck.

To me Ryzen is still majorly unknown. I hopefully think it will only get better as it was and is a totally new design from the ground up. But as one who owns a X99 system for years now I am only eyeing Ryzen for workstations these days. I persoanlly would rather build a 1700 ryzen system and then a cheap i5 kaby for gaming then do x99 again, but maybe that is me.

then a cheap i5 kaby for gaming

Why even? Ryzen kicks ass in games too.
Put a bigger GPU in the 1700 build instead of building that second system.

Why even? Ryzen kicks ass in games too.
Put a bigger GPU in the 1700 build instead of building that second system.

Because my point was ryzen for price and gains > x99 except PCI lanes. That way I can SLI or GPU pass thru and have the 1700 set as work station only. Ryzen has pass thru issues atm, and multi gpu issues. Do I think they will fix them, yes, soon, maybe.

Which quad port 10Gbe card to you propose? Do you already have 10Gbe NICs and switches (they're mega-bucks...)?

The reason I ask is the 10Gbe card I'm familiar with is the Intel X710, which is a PCIe 3.0 x8 card. On Ryzen you'd have to use one of the PCIe 3.0 x16 PCI slots directly connected to the CPU (which are normally used for graphics). This means the other one (where the GPU is installed) will also drop to x8 mode. NB: The PCIe slots controlled by the chipset are all PCIe 2.0.

Furthermore, although some x370 boards have dual NVMe slots, one is from the CPU at PCIe 3.0, and the other via the chipset, also at PCIe 2.0. If you use the second NVMe slot it usually disables one of the chipset PCIe 2.0 slots.

Don't get me wrong - I like the Ryzen platform, and I'm planning my own Ryzen workstation build with ECC RAM, but I'm not putting 10Gbe and dual NVMe in it.

Based on the comments I take it you're going to side w/ more expensive X99 platform?

16x or 8x still doesn't matter. So One GPU, one 10Gb NIC, one NVMe and one PCIe SSD is fine. Doesn't even have to be a high end board. Here, this is my setup: 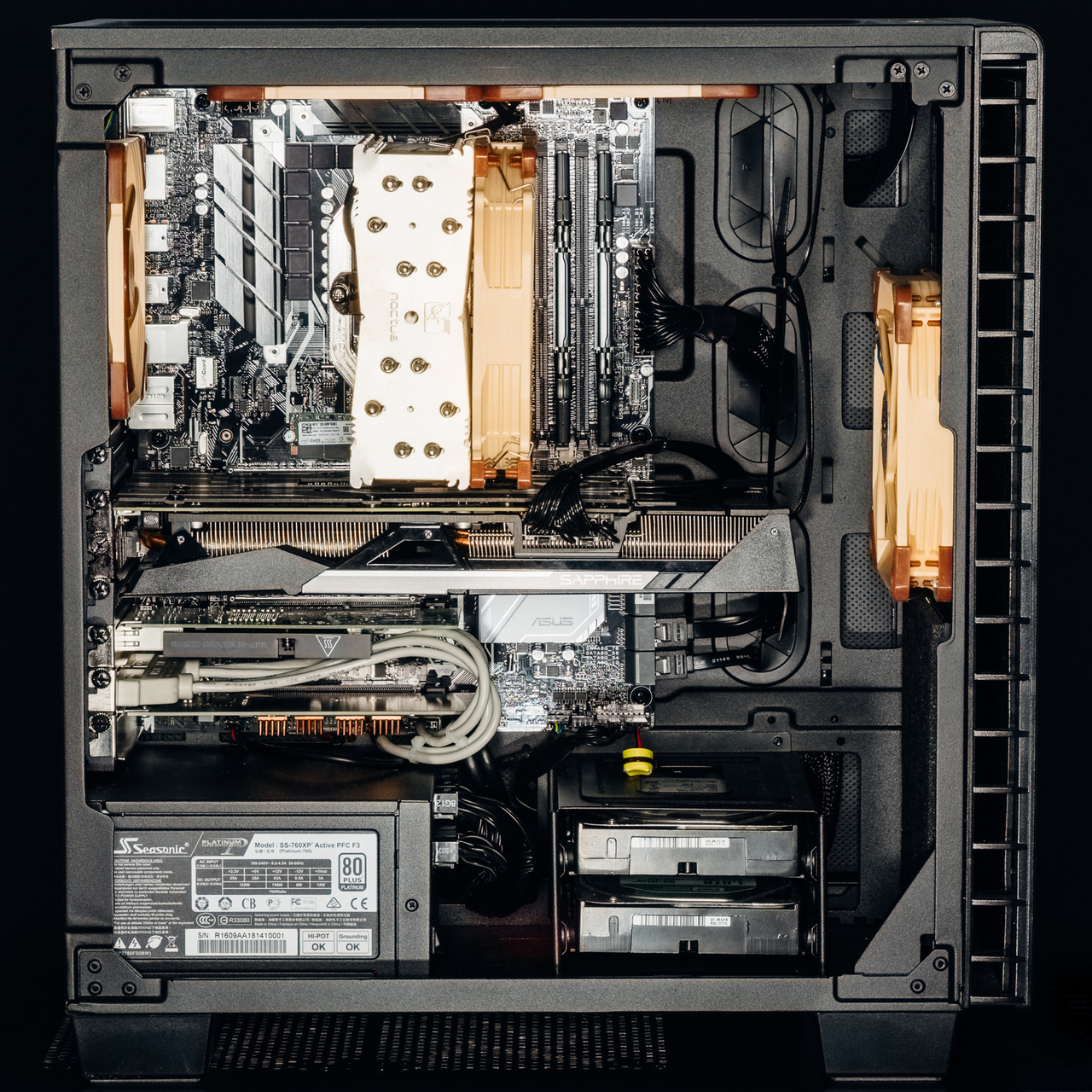 Yep - but the OP wants quad 10Gbe and dual M.2 NVMe. I agree it probably doesn't make a lot of difference if the GPU is in a x8 slot - but it's worth noting. Something which might be an issue though is if they expect to be able to use 2 x PCIe 3.0 NVMe SSDs. That won't be possible.

Anyway, that build looks nice! Is that an R5 case?
Still waiting on parts availability for my Ryzen build...

Anyway, that build looks nice! Is that an R5 case?

Thanks. It is the Corsair Carbide 400Q. Great case.
It can even fit E-ATX officially and SSI-EEB with a bit of ghetto rigging.

On the topic, I'm running dual NIC but there is nothing in the way to switch that to quad.
Also, even PCIe2 4x is still 2GB/s as far as I know. So the second SSD is still plenty fast.

I would definitely go Ryzen unless you need the extra PCI-E lanes. If we are really talking about $300-500 CPUs.

i think i would wait to see what x299 has to offer....at a minimum it should have optane support with high core counts....but youre going to pay....save up til august and see? your call..

X299 will be highly expensive. Even if I had to do some crazy things, it will not be worth the money for me.