My offer is 400 max which is the ebay price for a 1080 FE now I just checked. Many bids are lower then that so I excluded those numbers. I also excluded all new prices from my price estimation.

Estimated purchase time (sometime in the next 2 to 4 weeks)

Conditions: Must not have been used heavily for cryptomining or have had its stability destroyed by compute tasks as it will be used for gaming

The only time mining or compute task break or weaken cards is if they're in too hot a climate.

I'd trust it over some rando who's probably trying to pull 3 4k displays and overclock till it crash and burns.

But if you really want a 580 just wait like a week at least. Theyre going to start falling out.

I suggest not focus on a specific model, since I don't live in the US, I have to focus on what's available in my country and isn't overpriced. My tactics might help you in this insane times.

I usually sort the available products by price and browse from cheapest to most expensive (start at a decent price, like +$250 for high end graphics cards, otherwise you'll see a lot of crap).

Of course, don't buy the cheapest one you find, sometimes a much better one comes just for 10 more dollars.

And in case of doubt, for general reference use http://www.videocardbenchmark.net/high_end_gpus.html (grain of salt, this are synthetic benchmarks after all)

Also video benchmarks and such.

Edit: specifically answering your question, a 980 performs similar (usually worse) than a 1070 but has half the ram, I predict it's not going to age very gracefully for power users. I wouldn't suggest getting it.

I just looked at newegg and i saw funniest thing: 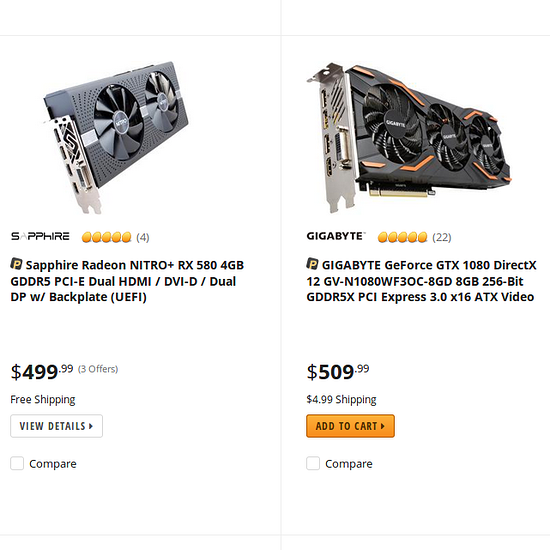 So just wait bro, then wait some more.

Edit: specifically answering your question, a 980 performs similar (usually worse) than a 1070 but has half the ram, I predict it’s not going to age very gracefully for power users. I wouldn’t suggest getting it.