WRX80 vs TRX40, Worth the Jump / Price Difference?

I’m a video editor / 3D artist about to buy a new system and I can’t decide whether to go with a TRX40 or WRX80 system.

Essentially its about £1200 difference between the two systems.

while it would be more cost effective to go TRX40 I would be hindered to 2 x GPUS with the number or PCIE Slots and wanting to use both TB3 and AIC which come included with the motherboard yet another additional cost for the wrx80.

WRX80 would be a build in which I could keep adding cards if need be and not worry about the PCIE Lanes but after see how much of a difference it is I’m now stuck with my choice.

Any advice would be much appreciated!

What is the bottleneck on your current workload?

Wrx80 has more ram capacity but if you only want 128gb you don’t need the extra.

Pcie lanes depends on motherboard. May be worth waiting to January for new threadripper. Depends if you need it immediately

Essentially PCIE Lanes, I have a 3950x consumer system and looking to jump up to something that can accommodate multiple gpus and Fast storage solutions for materials / models / Video file for edits etc.

Is January happening for the new threadripper ?

Seen bits about delays and not potentially doing the 5000 series for wrx80.

I just have bought into the WRX80 platform myself, ordered this morning and hope its great upgrade from LGA 1200.

But honestly im no video editor or not the most knowledgeable on the topic but here are my thoughts, if you don’t benefit from the Extra Ram/Ram Bandwidth or the PCI lanes that WRX80 provides vs trx40 I would personally go with normal TR due to it being cheaper and with the extra 1200 you could always get a 3990x (if thats something that you could benefit from) or some more storage or even keep it for a rainy day.I have heard about TR 5000 and every time i hear something good about it, it seems to get pushed further and further away from the rumoured announcement times. but if it does come out, it maybe more likley to go on the TR40 platform vs the WR80 platform id presume since its just more commonly used.

P.S Also looking at your work on your site as we speak and its actually pretty damn cool!! great job!

Thanks for the input F1N,

What spec did you go for out of interest and what is your use case?

Yeah, I mean the more PCIE lanes the better in my case, with the GPU rendering not so much the cores but then AE has introduced multi threaded cpu support.

Maybe one option is to go lower on the WRX80 get the 16 core and wait until the 5000 launch. Just reading a few articles now and there have been some wild wrx80 chips and not TRx40.

Appreciate it, thank you!

What spec did you go for out of interest and what is your use case?

My specs is fairly odd since i picked up a TR 3945W from a family member he took out of his Thinkstation and since its an OEM chip only you cant buy it for whatever reason whilst all the other TR Pros you can along with a WRX80-SU8-IPMI and 4x32GB 3200 Sticks. The use case is really because its going to be cheaper than me upgrading from LGA1200 to X699 or whatever the next intel hedt is & i need a new machine to get me through my fluid simulation classes / my apprenticeship, since my current i9-10900 takes 4 days to do some simulations, so at least i have the chance to get a 32 or 64 core at some point once i can afford it.

Sounds like a great foundation, guess I may have to follow that route and get the lower end cpu and save it for the 5000 series drop.

please do a build/review thread if you have the time, really curious how it works out in your workloads!!

Sure thing if I can!

I also plan on water-cooling it, so may do a log of it all.

Very excited for the AIC card, annoyingly the AORUS XTREME Gen4 is yet to hit the shelves , really wanted that 28GB/s speeds!

Just looked up the AIC and man i want one… and i actually could benefit from them speeds by for my simulations since every little core/ram/storage speed helps. may have to grab one or two myself.

Check out this AIC instead did a little look around and I’ll be picking one of these up instead as the company I’m going to order have them in stock haha.

They also do 2 x drive cards might be worth it if just want to pair up drives.

“The SSD7505 is the industry’s fastest 4-Port NVMe storage solution. The cutting-edge, Gen4 switch chipset allocates x4 lanes of dedicated PCIe 4.0 bandwidth to each M.2 SSD to ensure maximum performance and lag-free response time. A single controller can deliver up to 28,000MB/s of transfer speed, and over 40,000MB/s in a Cross-Sync RAID 0 configuration!”

Keep in mind that WRX80 has double the memory channels and full support for registered ECC memory. There are quite a few things you get with a TR Pro over TR. You can’t get that nice IPMI on any TRX40 boards either.

Will do, I think my mind is made up and I’ll be going WRX80.

I’ll drop the cpu to be lower and wait it out for the next series.

It has many pros at this point and longevity compared to the TRX.

Are you sure this will work? From what I read the TR 3945W ONLY WORKS in Lenovo motherboards. I looked at this before and it was vendor locked from all the chips I have found around ebay.
So it would be interesting if you found a consumer motherboard that could use it.

As a person who just went from a 3900x to a 3960x; I would say that the WRX80 platform is a bit much unless the only thing you need is memory channels + PCI-E lanes. TRX already has a ton of PCI-E lanes and when it comes to using GPU’s for rendering/compute, you don’t need a full x16 for any of the cards. Additionally a PCI-E 4.0 x16 is overkill for any of those cards as a 3090 can run on an x8 (PCI-E 3.0 x16) without an issue even as a primary card. Therefore the additional lanes of WRX REALLY need to have a use that actually takes advantage of the massive bandwidth.
8 Channels of memory is nice, but it is also more ram to actually buy to take advantage of it. I have a HP DL325 w/ a 7402P for my server company and buying 8 sticks of ram to get to 128GB was a bit pricey…

The other thing I don’t like about the WRX80 platform is the lack of clockspeed… WRX80 is basically just EPYC rebranded; so its not the same type of high-clock bins that come on TRX40 and that is what makes threadripper… threadripper. Otherwise its just basically a server that you are using a desktop. That single thread performance goes a long way on a desktop platform.
Things like IPMI like @Exard3k mentioned are “cool” but not practical for any desktop you actually plan to use. These are once again, server features for servers in datacenters. Not PC’s in your house.

For me I do software development, SEO, Crypto Trading, Encoding, VM’s etc all at once. So I primarily needed the extra memory lanes and PCI-E lanes for my NVMe drives + VM’s to not bog down the system.

I would also be dropping down to the 3955wx chip.

Yeah IPMI is handy to have but most likely wont utilise it as much as I should.

That is generally the only thing leaning me towards WRX80 is the ability to put more GPUS in the system, with TRX40 I’m only limited to 2-4 depending what is in the slots.

With WRX80 I have 7 slots to play with which is very appealing and later on down the road adding more cards etc.

Happy to sacrifice that for more GPU’s for render times.

You can also expand to more slots with risers and PLX cards like what is used for Crypto mining. Since you aren’t using the GPU’s as display outputs for max performance, you can add like 15 GPU’s using those PLX boards and they will be fine for rendering.
Can you reasonably get a 3955wx chip that doesn’t have vendor lock? I know that most of these chips have vendor lock from what I saw when I was deciding on what to build for myself.

@Jimster480 Interesting do you have a link for the PLX Stuff at all, be good to take a look!

Yeah I’m currently based in the UK so using Scan for a custom build but they are more than accommodating and price is best I have seen so far.

I have to go through a vendor for the cards as with the shortage there is no way of getting hold of them easily.

Here is an example of one: 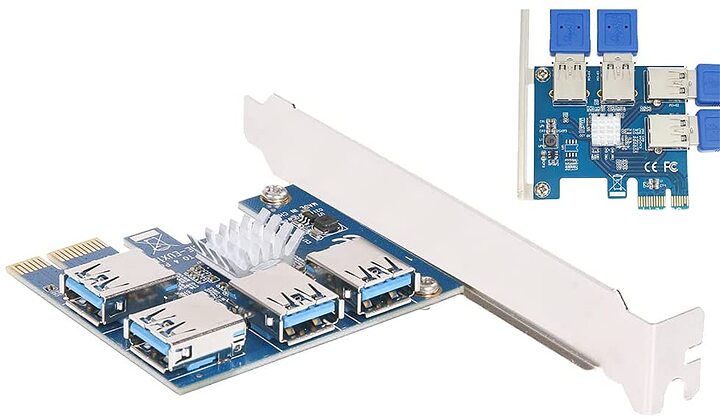 There are a few other ones with more lanes and more bandwidth obviously. This is one used typically for crypto mining. Since TR has so many lanes; the bigger PLX cards can be used to provide more bandwidth to the GPU’s. However GPUs don’t typically need too much bandwidth for rendering and stuff.