Would you use Windows 8 if

Would you use Windows 8 if the start menu looked like this? 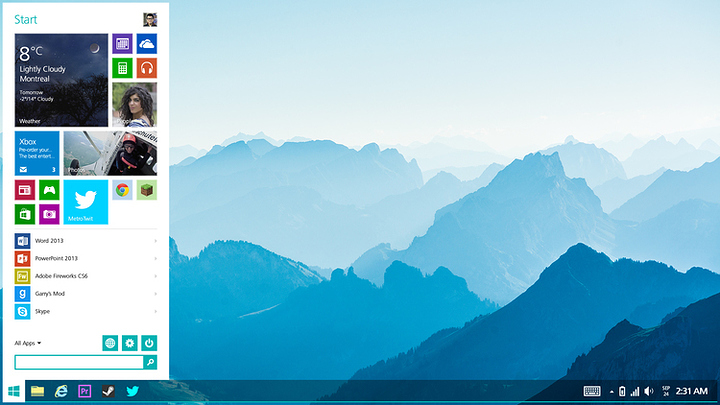 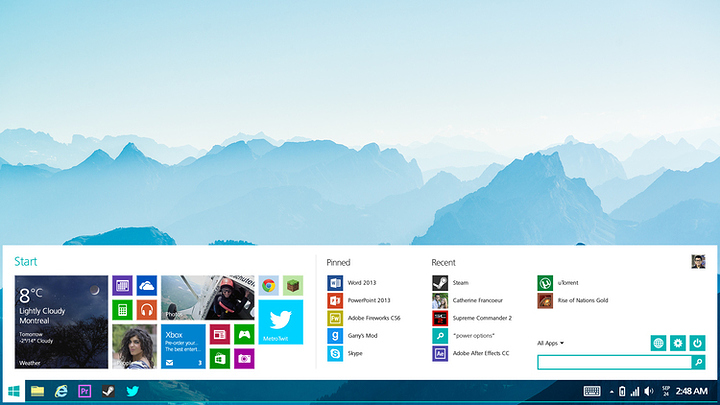 The only reason I am not switching to 8 is because of that. If 8 was like that, I would switch in a heartbeat. I love this design and style of it. Its 7's start menu but with the "Metro" twist. The link I put in is a pretty good read about the whole UI messup and comparing this to Windows 95 and having all your DOS programs running in full screen.

I'm using 8.1 right now so yes. However if this was originally in windows 8 I would prefer it more than the metro screen.

as a windows 8 user, no i would not be using windows 8 if my start menu looked like that

i don't like the aesthetic and it's wasteful of space

In the blog the guy said to give users a choice of the Start Screen or his start menu design. I rather like it though because you still have the features that makes 8 great but with the old start menu I happen to love so much.

I would love the option if it was given. I own a Dell Venue 8 Pro which is an 8 inch full blown windows tablet. And for that experience I use the metro interface to the fullest. However on my desktop rig I don't even bother to use metro interface. So if an option were given I would love windows a little bit more.

Im on the same boat with you and that is what MS should've done in the first place. Give users more options instead of being like Apple's iOS mobile platform.

I was sold on 8.1 for ONE reason. Wi-Di. This is because running karaoke usually requires a 15-20ft VGA or HDMI or any other cable. I do not need to tell you, replacing these things often get very expensive. Not to mention, Drunk singers pull cables. so, Wi-Di was like mana from heaven. I understand it is not a big thing for a lot of people, Especially in the living room, But on a pro level, This is awesome at work, metro is actually more simple and faster for me. But at home, F%*K Metro!

I've been using 8/8.1 for quite a while, probably around 9 months now. But always with Startisback. I think it's actually turns it into a halfway decent operating system.

No, Windows Lego Block in any lego block form, makes me mad as hell.

But that's not even the biggest problem, there are ways around the Lego Block Metro crap (albeit i would be grateful if i had an actual freedom of choice to remove it or have an option to install Windows 8 without it to save space if nothing else).

The biggest problem and reason i am afraid, is the focus on cloud operation. If Windows 9 goes full evil with cloud implementation, then i am going to make a blood ritual praying for Linux to become as relevant as possible, as soon as possible, by adopting everything Windows has that's keeping people (and business) on it, and making it better. The sooner it becomes a valid full replacement, the better. Maybe the competition will force them to think properly again, since that's what it takes these days, playing magnets with corporations.

I can wait for Windows 9 and evaluate that then, so no I wouldn't go Windows 8 even if they brought in the start menu as an option. I would pay a couple of bucks for one of the decent start menu replacements that already exist, but I have a few other niggles with the underlying system that I will rather spend time looking at when Windows 9 betas start showing up. (like UAC and stuff)

If indeed as rumored in Windows 9 we will be able to run "apps" in a window, hell I might even use one or two. Imagine how many more apps that would exist today if Team Sinofsky had smoked less weed while designing the Metro UI.

I think Microsoft is going to be foolish and hold the next Direct X hostage to a system gamers and enthusiast don't want.

If they do, there is still MANTLE

Mantle is only supported on AMD video cards. What about the Nvidia players?

I wouldnt either. I would've switched if MS would had that style start menu when 8 was vanilla.

I'm using Windows 8 with the Windows 7 explorer shell so I have a proper start menu (exactly the same as in 7) so I have no (more) issues. And no, the startmenu you showed is still too big and ugly imo... Unless you can make it smaller by removing the crap you don't use (most of the tiles for example), then perhaps, if you can make it look better, but I guess I find it ugly mostly because of the tiles and your color scheme.

Well Mantle was made open source and I think I remember AMD saying they do not care if Nvidia does a take on it. And it would benefit them if they did create a version. So there may be hope.