Hey guys I bought this rig for pretty cheap and I was wondering if a GTX 1050 would work in it? Respond if you need more information.

I plan on using it as a work rig with Linux running on it. 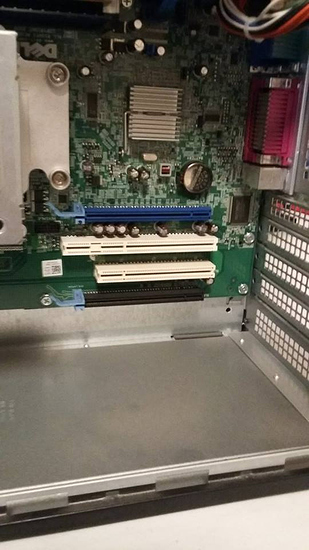 Seems like it has x16 physical judging by the picture, If you want to test a different gpu in the slot first that might be worth doing.

thats fine, I dont think the blue slot would work due to the non standard orientation, hence why the black slot is the one to use.

Definitely make sure the card has enough clearance before you commit to buying a new card.

Its a little tight in the case, I found an old gpu and couldnt fit it into the slot, I may trying moving the motherboard.

I'm just going to say it
RX460 is both faster and cheaper...
Example:

I might look into it but I heard that the Linux drivers are bad? 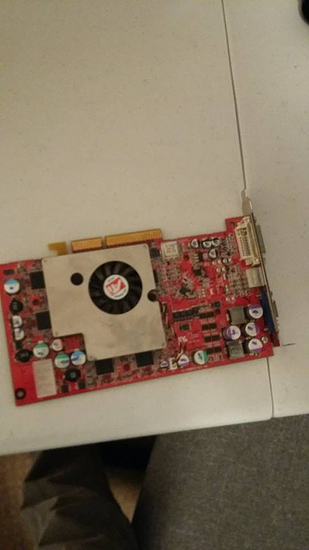 In many mass-produced prebuilt systems like this it is common for the second x16 slot to be 4x. It may be 8x, particularly if it's a workstation, but I wouldn't bank on it.

well I pulled the mother board out of the case it that gpu I found wont fit in the slot so I dont think I gtx 1050 would fit either so I may have to try another computer.

well I take that back, my 780 ti fit into the slot, maby my ATI card is just too old. 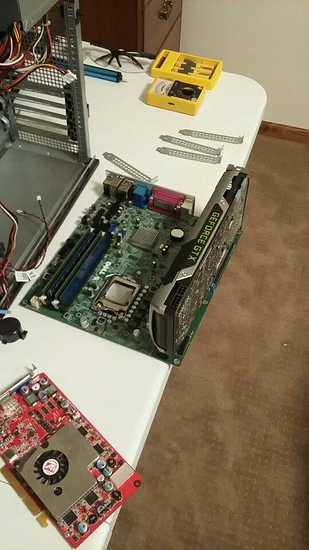 At least I know that if I could find another case or change this one enough it would work.

if I could find another case

Some of those motherboards are made for this specific system and have proprietary mounting holes. It may (or may not) be unable to fit in a standard case.

That ATI card is an AGP card. It's a little hard to tell, but the way to tell AGP is that usually PCIe has a stabilizer tab at both ends of the connector. The contacts on an AGP connector are also on two levels, whereas on PCIe they're just straight in-line.

If you look next to the connector it seems to be wired 16x as you see pins all along the connector not only 1/2 or 1/4 the way down.