WMP 12 is making me racist

So, I've backed up pretty much every piece of music from my old PC to my new one. And I have this one album that isn't displaying info properly in the WMP 12 library. Album info, artist info. But most of all, track length isn't shown. So I can't seek in ANY of the songs. I kept thinking this might be an ID3 tag problem or something. But as it is, it's pissing me the hell off...

My old hunker-clunker was able to display all info as soon as you pop the files into WMP. And I was on Vista, on WMP 10, I believe. What the hell is THIS SHIT!? And on a SIDE NOTE, the equalizer SUCKS BALLS! I set it to "Custom" and all of the other sliders still move in tandem with the one I'm moving. What kind of whoopty-ass software is this? Did they get WMP 12 programmed by a bunch of clinically tarded people, or something?

I suggest MusicBee. I really enjoy it.

However, discrimination against the mentally impaired isn't racism, as retardation or other mental impairments do not constitute a 'race' of people. It's not good, mind, but it's not racism.

Probably unrelated, but wtf does 'whoopty' refer to? At least I hope it's unrelated, it's certainly no racial slur I've ever heard.

Hey there! You're like the third person on these forums I've seen use it. 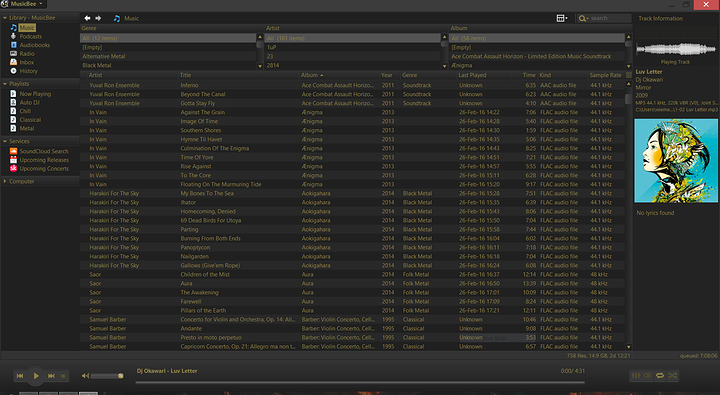 It's less slick and more "gamery" than your's is, but I'm really partial to red-on-black (see the tie), and fucking up the usability of the UI, in programs that let me do that.

and fucking up the usability of the UI, in programs that let me do that.

At least you're being honest :D

I don't know if you're serious or not, but I LOL'd either way. And a whoopty is basically a piece of shit car. So I pretty much use it to refer to anything that's broken, or doesn't work as it should. You get the idea. As for Music Bee. It looks promising. But I just wish I could somehow get WMP to work. I don't want to really install software I don't have to install.

But you're saying that it doesn't have any of the aforementioned issues of WMP?

Media Monkey and Foobar are my two personal favorites. Media Monkey has a really nice search function and a number of useful scripts. Foobar can be customized into quite literally whatever you like once you get used to the layout features.

I've used MusicBee for a few years now and I've never really had issues with it. Only issues I've had are Windows problems rather than MusicBee problems.

And as mine and @thedmbarlow's screenshots show, it's pretty customisable. And if there's a feature somebody wants but isn't built in, MusicBee accepts plugins (IIRC it may be compatible with some Foobar plugins in addition).

As for as your library stuff, shouldn't be an issue. I've not seen it fuck with anything. It doesn't know wtf to do with read-only files, but that's pretty normal.

I don't tend to do custom eq stuff. I prefer to eq by genre. Maybe I'm weird, who knows? But I've had zero issues with the equalizer.

Plus, there are quite a few plugins (like an iPod/iPhone driver, for example) and themes available, and it supports audiobooks, podcasts, and internet radio out of the box. I mention this because you don't want to install additional software you don't have to.

Try Dopamine music player. its still under development but its by far the best looking well featured music player.
Music Bee Is a great alt too

There's your problem right there.

(guys, this thread is a year old. op probably has found an alternative by now.)