Should I go usb 3.0 or pci? I want a fast, reliable, quality, long lasting adapter. Price doesn't really matter if its worth it. I would say $90-100 or less, the cheaper the better. BUT if pci is faster will it slow down my gpu(bandwidth or anything)? Would like to be able to play games online with adapter and get high speeds for downloads etc.

PCIE if you can.. they are usually better... However USB3.0 adapters work fine.. if you need some suggestions on PCIE adapters.. heres a few

PCIE adapters tend to come with a nice movable antenna base.. they are less flakey and just work better

heres its cheaper knock off which will work too

Thanks @CynicRF @ibreakthings if I go PCIE will that effect my gpu at all(bandwidth etc)? will it make my card be 4x instead of 16x?

I have the ASUS PCE-AC56 adapter (2 antenna version of the AC-68), and it's been fantastic. Moving to the AC-68 because this one is going into my HTPC. I recommend them both.

A PCI-E adapter shouldn't effect bandwidth, unless you're already using all of your available PCI-E lanes. And even then, lets say your GPU had to drop from 3.0 x16 to 3.0 x8, there would be no change in your GPU performance. 1-2 FPS at most. GPUs aren't even close to maxing the bandwidth they're able to access.

What CPU/Motherboard are you using, and how many other PCI-E devices do you have? A wireless adapter should only be consuming one lane.

Usually adding a simple x1 pcie wifi card should be okay. I don't forsee any issues if you only have one graphics card in the top slot.

Grab this one. It uses an Intel 7260 at a cheaper price than the regular intel model. I've used both the Intel 7260 and this Gigabyte one and both perform very well.

@Some_Tech_Noob Thanks for the info. But previously I had a ASUS PCE-AC68 and it dropped my gpu from 16x to 4x. I don't know why. I have the gpu in the top slot closest to cpu. There is PCIE above that slot where my gpu is in. 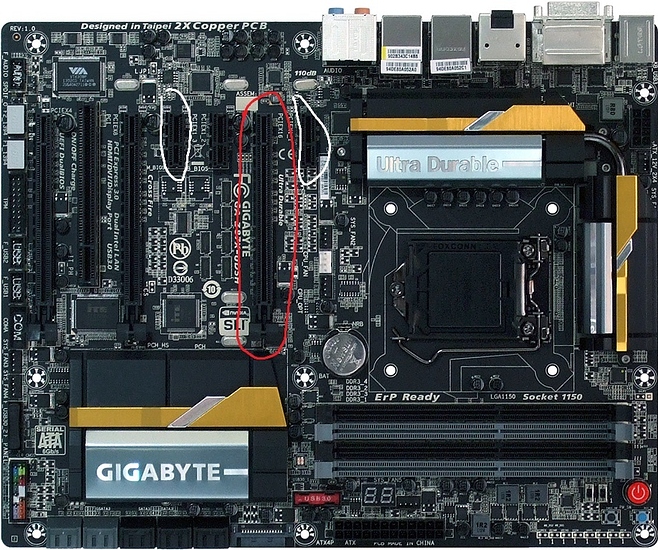 GPU should be in the slot circled in red, adapter should be in one of the two circled in white. In that configuration they shouldn't even be attached to the same PCI-E controller.

@_ju1es Gpu is in red circled slot. When I had that asus pcie adapter it was in the white circled slot on the right(pic) closest to cpu. I believe I tried the other circled white slot as well before I returned the adapter.

You might wanna check your motherboard manual then for what lanes get disabled when various items are plugged in. Z97 has a ton of I/O but not enough PCIe lanes to back it up, so that's sometimes why using some slots or sata ports might trigger your pcie slot to run at a lower rate.

ok thanks for the information, I will check the manual @Some_Tech_Noob. I didnt know sata ports could trigger my pcie slot to run at a lower rate.

Thanks @CynicRF @ibreakthings if I go PCIE will that effect my gpu at all(bandwidth etc)? will it make my card be 4x instead of 16x?

NO lol.. plus 8x is more than enough infact cards can only marginally get close to saturating 8x at a 3 way config. Dont worry about it

Thanks for the info.....but I had a pcie adpapter before and it made my card go to 4x from 16x

Depends on your motherboard.. Most modern boards send it down to 8x and the max