I am trying to figure out why Windows 10 is using as of right now 92% of 16Gb of ram. Dont have anything major open besides Steam and Battle.net in Processes tab the highest is only 164MB for System and compressed memory. Ive looked in the Resource monitor. Anyone have any ideas?

How do I detect where the memory leak is?

I had a similar issue earlier this year with a laptop that was upgraded to Win10. Very high RAM usage. I discovered that the Edge browser was the culprit, particularly with multiple or long running tabs open. I just installed Linux on it though, so I don't really have any advice for you beyond investigating the Edge browsers RAM usage on your system. Good luck!

UPDATE: this link may help http://answers.microsoft.com/en-us/insider/forum/insider_internet-insider_spartan/edge-broswer-highrising-memory-usage/89c2ef59-8d33-4684-97b6-a78357716f2a?auth=1

The easiest way is to google something like 'windows 10 memory leak' and hope it comes up with something that applies to your system. It's pretty hard to tell what is leaking because that's just how memory leaks are. If windows had an easy way to determine this, it wouldn't be a problem in the first place, is my guess. It would be a good idea to disable things you dont need from startup and update all your drivers.

This article is more technical and it looks like the last paragraph is the only part that gives any idea of how to actually determine where it is coming from. The site wants you to give them a bunch of personal info before they let you read it, so I copied the good parts below.

The Memory/Available Bytes counter lets you view the total number of bytes of available memory. This value normally fluctuates, but if you have an application with the memory leak, it will decrease over time.

TheMemory/Committed Bytes counter will steadily rise if a memory leak is occurring, because as the number of available bytes of memory decreases, the number of committed bytes increases.

The Process/Private Bytes counter displays the number of bytes reserved exclusively for a specific process. If a memory leak is occurring, this value will tend to steadily rise.

Quickest solution to solving problems in windows is reinstalling windows

Do you have a Killer NIC?

The Network Manager Suite did this exact thing to me, uninstalled

Is this number unusually large? 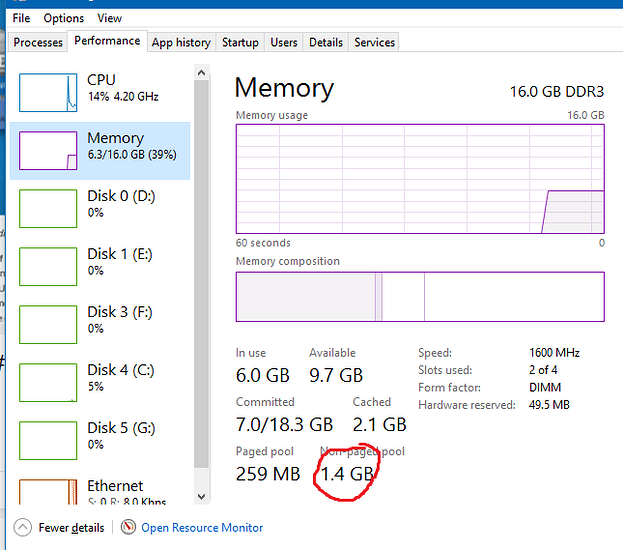 what is your motherboard

Quickest solution to solving problems in windows is reinstalling windows

no, if he has killer NIC what I described is exactly his problem if he installed the manager suite

so yes this a memory leak, a MASSIVE leak

The motherboard I have is MSI Z170A Gaming M5 and it does have a Killer NIC. As of right now I did a memtest86 and passed, did a malwarebytes scan and a virus scan. I haven't had the issues since rebooting but I do believe the non-paged pool was high.

Ugh why is windows such a mess? I wish there was an easy way to fix this I could take notes for when I'm booted in windows. I've had a similar problem lately but I've just been ignoring it because I don't care that much lol

your drivers will be fine

I had the same issue so I switched to linux

I tried uninstalling Killer Performance Suite but it just removed the application and my network drivers.

hmmm, download the drivers separate from Suite, I can do that with my asrock board

either reinstall or download them somewhere else for now

AsRock gives me the option of downloading drivers separate from Suite, not sure about MSI

I got it! weird how they don't just have an option for just the driver. Had to go to the driver folder and update the driver from Device Manager. hopefully it fixes my issue

Its probably those damn windows updates that's being installed on their own.

So far so good