TL;DR: Please give me suggestions for USB Wireless Adapters that have actual Windows 10 drivers. NOT Windows 8.1 or lower. Internal solutions also appreciated, but not really what i'm looking for.

So i upgraded to Win 10 for several reasons, probably should have waited, but here i am two headaches and a good half drunken cry later.

Several things broke in the upgrade, but have since been fixed. The only thing i cant fix is my wireless adapter. The driver is for Windows 8.1 and tries to reset itself at random, then gets stuck in an endless loop until it crashes. Sometimes if im lucky all USB devices will then crash as a result... weeeeee

Anyway i've tried every trick in the book regarding this issue dating back to Windows Vista and nothing has helped. My only options are to buy a new adapter or pester Asus in the hopes a new driver is released.

While i realize some Win 8.1 supported adapters work fine with Win 10, i'm not willing to go out and buy them all and return w/e dosen't work on my system. Mine should be working fine, but it's not.

I've tried searching for a USB adapter, but i can't find anything that officially supports Win 10. Part of this is because my usual hardware sites don't sort results by what is new and i've had to manually search each manufacturer's website for the drivers based on my results. And the other part of it is because i think i'm limiting myself to USB and Windows 10 is so bloody under supported when it comes to the adapters.

If you could help me find an adaptor or better my search methods that would be awesome.

Have you tried uninstalling and removing your wifi adapter from device manager, reboot, plug it in & let it self install?

btw. what adapter make/model is it? thanks.

Hey, I've got the same adapter! It worked well in Windows 7, haven't tried it on windows 10.

It's sufficient for web browsing/video streaming and some light gaming, but I didn't have the most optimal experience when playing FPSs like TF2.

It's an asus usb-ac53 adapter.

I assume you've gone through all your motherboard drivers and updated them as well yeah? Cause if your other usb ports are shitting themselves too it may not be your wifi adapter at fault.

I did consider my MOBO being the issue and looked up the version. Its only slightly out of date and i actually looked into it further to see if an update was necessary, however it turns out the newest update was from 2013 and it came out just days after the one i have. All it updates is the list of CPU's it has compatibility with so i thought it unnecessary.

I'm not the only one having this issue with this specific adapter btw.

I've been keeping an eye on the event logs and what happens is the adapter tries to reset so many times windows executes some override and forces every USB to disconnect and just resets everything.

Id give you a screenshot of what that override is, but im not in front of my computer atm.

I don't think it will help, but here's a small breakdown of what's going on. 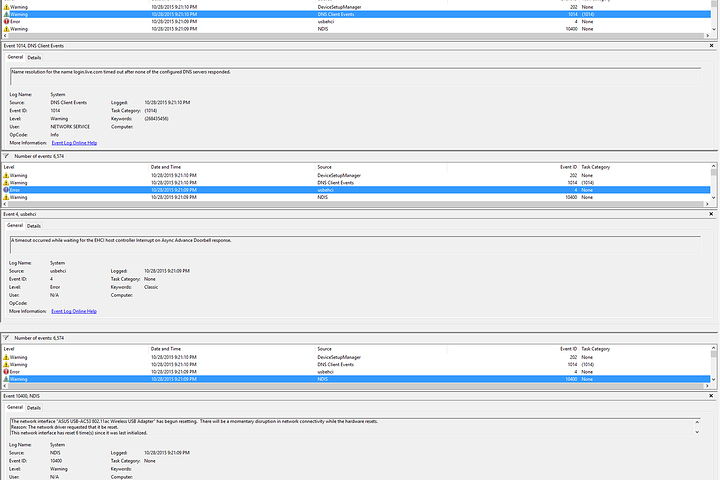 I tried three other suggestions to fix the adapter today to no avail. Looks like updating the MOBO is the only thing i can do now, i'm literally out of known options.