Windows 10 not downloading from 8.1

I've decided to upgrade to windows 10 but every time i attempt to upgrade it goes into a endless loop in this window. i have left it on for an entire day and rebooted several times. any idea on how to fix? 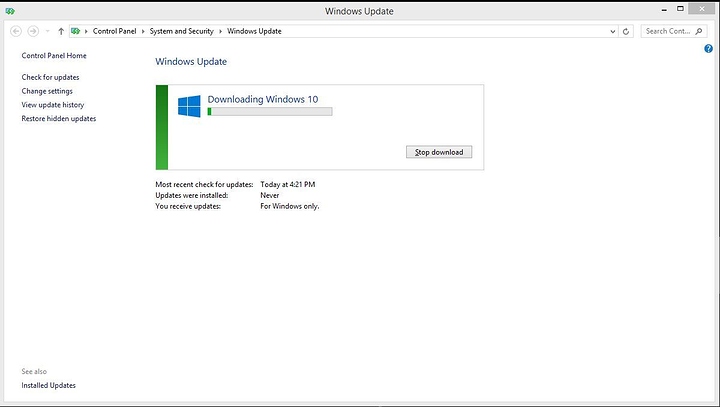 Close it and go to
go to c(or whatever your boot letter is):/windows/softwaredistribution/download

Remove everything in that file and reboot, try again.

Reply back if that doesn't work.

lol or just download the iso from mircosofts site and do the upgrade manually. less chance of failure that way. also make sure that if you dual boot that you remove all secondary os disks and make point the bios to your windows disk.

afaik doing it that way throws you straight into 1511. so you dont have a whole bunch of updating to do as well

edit if you want uefi booting i believe you have to do it a point of upgrade, otherwise its a much longer process. you can do it. but you'll have to pirate AOEMI partition manager.

But if you are upgrading, you need to do the upgrade from whatever OS to get a 10 key encoded. You won't get a 10 key unless you purchased one, or you already have one encoded.

not true. the iso allows for an upgrade to occur, instead of clean install. i know because i've done it twice now.
just boot the usb and it will detect the underlying os and offer and upgrade option.

When you said clean install, I thought you meant removing the old. Interesting, and good that the manual option is available... I've done a bunch of upgrades and that would make things much easier.

I have done a few clean installs of windows 10 on systems that had 8.1 preloaded from the manufacturer. It has installed and activated each time without even entering a product key. From what I understand the major brand systems have the license info stored in the UEFI. So if you don't have the product key sticker on your system a clean install just magically works as long as you use Windows 10 build 1511.

did not seem to work, also my windows is pirated

Is it 'activated?' You should be able to do it, regardless- unless something new is out to stop it.
You could follow @bryann816a suggestion.
If you don't want to lose everything, you could try the standalone installer as well. I'm on mobile otherwise I would link it

lol my advice is to get an oem key from kinguin. its like >30 bucks. get a key for your os. go into settings and change key associated with the os. once you do this. and see that it is activated. you should be good to go.

i believe though that microsoft did allow pirates to update to win 10. regardless of activation. if all else fails just do a 'clean' install. all you stuff will be saved in 'windows old' in your c drive.

DON'T go through with this unless it is made clear that your older files will be saved. or dont do it if it requires you to format disk. at that point you will lose all data.

i did the"clean" install for my sibling and copied the steam and origin folders back to the new programs folder and pointed the path to steam. worked although a few games needed verifying.
edit:
or you can

Tbh Windows 10 is garbage compared to 8.1. The only thing that is slightly good is the implementation of workspaces and Start Menu is back. But if you want the shitty start menu that has live tiles inside it then get Windows 10 I guess. Or just download StartIsBack to have a way better system with less bloat and almost no spyware (compared to 10 which has it built in) Windows 8.1 is the best Windows ever as long as you have StartIsBack, but that's just my opinion/advice.

Edit: Also forgot the garbage settings menu replaces the much better, easier to find things in, control panel. And it has some weird ass theming shit.

Haha! imagine how many people who wants to change places with you now! This is so backwards!