CS GO I went from 210 fps to 90. GTA V stutters and gets less frames, DayZ the frames are almost but in half. Any fixes?

What drivers are you on? I have be noticing stutters in game myself with the dx12. I also used dx 11 on win 10 which seems much smoother. It is all so new that it is hard to say which way to go.

AMD or Nvidia card?
Not sure if Nvidia allready has fixed their driver issues for Windows 10?

You can't as windows updates will always install current drivers for your hardware. You have no control over it. :(

Oh wow, someone had the same issues that I had... on the HD4600 on my laptop I went from a fairly smooth 60 fps in CS:GO to a horrendous 45-60 frames. And stuttering was off the charts, not sure if this was an issue with drivers or something else.

I believe that divers updates can be disabled. 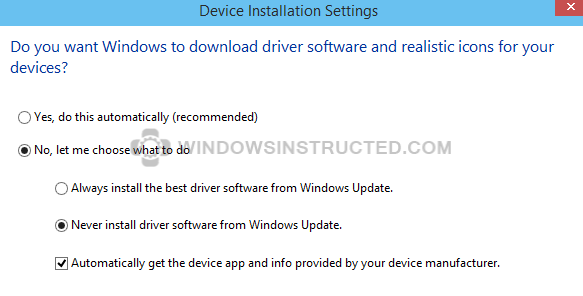 Windows 8 and Windows 10 download device drivers by default. But in some situations you don’t want that, such as: Newer drivers are causing issues with your system You want to use the origina…

You may want to use dx11 and 10 for games that have not been optimized for 12. I cant remember but under steam there was a way to tell games to use different versions of dx.

I am confused here. How are you running DX12, there are no games for it. I don't have 10 yet so have not heard anything about this.

The dx 12 drivers for 10 not the games. There are no dx 12 games. At least not yet. Forced those drivers on you anyway, dont they ? Technically dx 12 support I should say. Stand corrected.

Actually, i would say it is just too early to tell. There are issues and bugs as with any new thing.