I have a 600w powersupply and would like to install an ASUS R7250 which requires at least a 450w power. Should I upgrade my powersupply? Also, I don't have the 6prong power cable needed to power the graphics card, which is another reason I am asking this question...

Hell, you can probably run that graphics card and an average CPU with a sub 400w PSU.

Here's a video of my gaming PC using only 380w at full load, with Aida64 and Passmark 3D benchmark both running.

** *** *** And FYI. The recommended PSU wattage on those websites are way over estimated to prevent idiots from blowing up their computer with some cheap PSU.*** *** **

All I know is the cpu is an amd quad core. I don't exactly know what model of amd quad core. The older graphics crapped out so I can't boot into windows to check the specs.

Then you could get away with something like a Corsair CX 430 watt PSU if you had to. So 600 watts is double or maybe even tripple what your system needs.

I also noticed the powersupply that I currently have doesn't have a powerplug that will fit the graphics card. Is there a cable converter that I can purchase?

First, Tell me the make and model of that PSU. The quality of a modern PSU seriously comes into question, if it can't even support something as little as an R7 250. 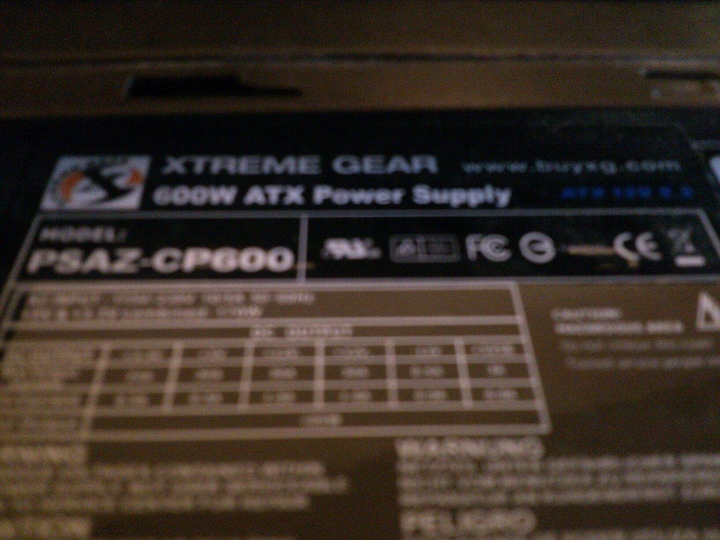 Yeah so your power supply is what I'd address as a bomb. All fun aside the quality of the components in that power supply are below standard. If you have a complete build list and a budget we can suggest a better power supply.

Yeah.. As the caveman said, that's the kind of PSU we're talking about. Replace it with something that was built with a bit more quality in mind. I doubt that PSU even delivers the advertized wattage.

I will be giving the computer to a family member once its in good running condition. my brothers budget is 100$ maybe more if need be. What do you guys recommend for a powersupply?

Meh. Something cheap and of okay quality, like a Corsair CX600, will do.

What would you recommend for high end? I want to give him multiple options

For the average user, a Corsair CX 600 offers plenty. I called it cheap as in affordable, not cheaply made.

Ok, great! I appreciate all the help and recommendations :)

the Xtremegear psu´s, i have personaly never heard about them, seem to be used in allot of prebuilds from powerpc and such.
I asume its a sort of wonky MS-Tech psu with a diffrent sticker or something similar.

i have no-idea if they are good or not, i did a few googles, and i saw a few complaints, so i guess, chance it for a decent one, would never hurt.