Why Consoles are Better than PC's ( The Never Ending War ) 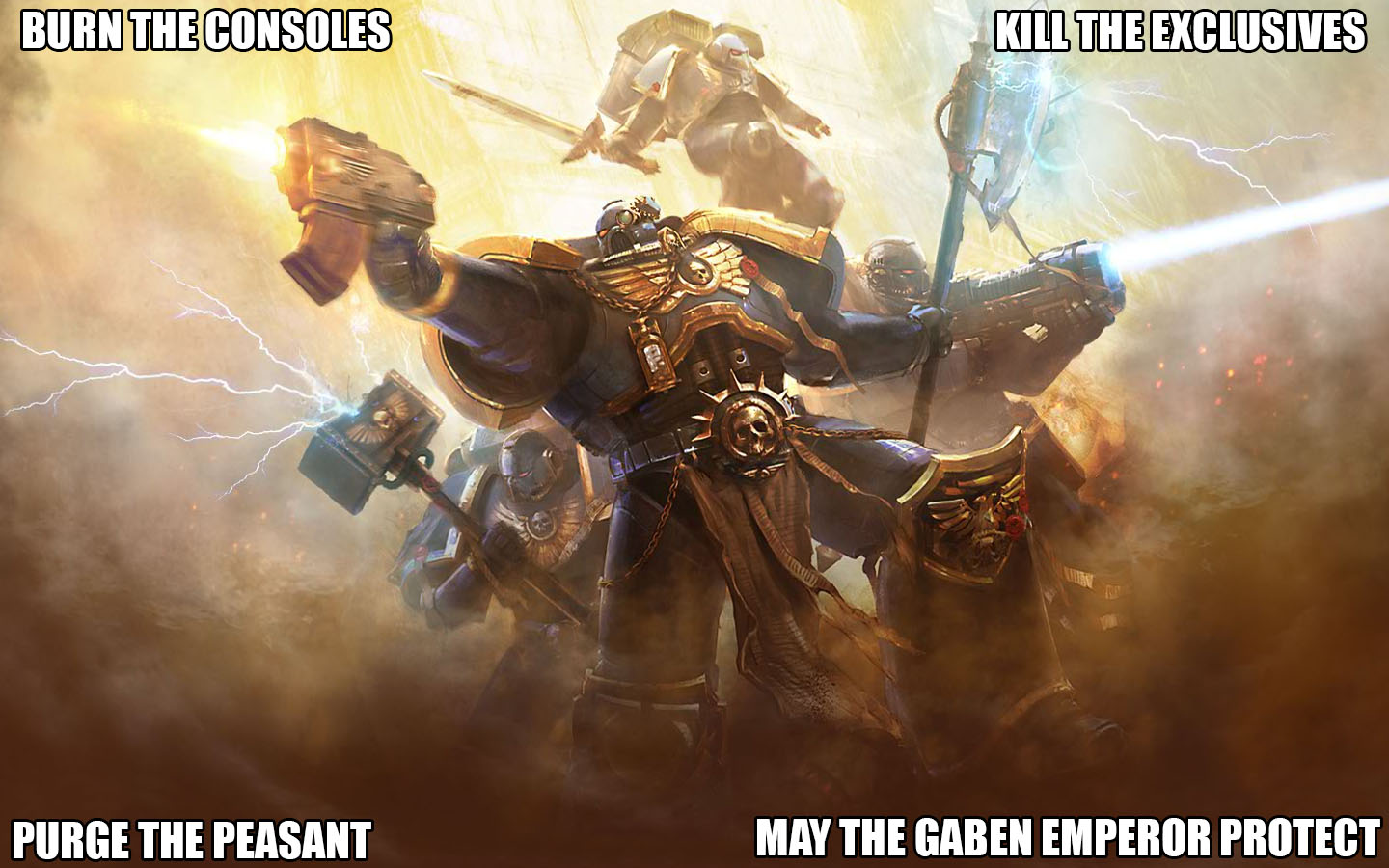 Oh... it will be that kind of thread.

As console exclusives, they lack substance. Not really interested in buying games, because they are part of a brand/franchise. I'll buy games if they are good, and good games are on PC.

Keyboard and mouse = all the buttons! = all the precision! = more in-game features!

For me it all comes down to buying power. your $ just goes further on PC than it does on Console. $60 for a game. who the fuck would pay that these days? this isnt even counting the next $50-$60 in BS DLC they want to sell you. then comes the subscription fee to even play half of the game you just bought. who the hell would pay twice just to play a game?

say you only buy 4 games a year for the 10 years you would have this console.

To add this PC can also play damn near every single game to come ever come out for it plus damn near all console and handheld games from the Wii back.

I came from consoles just like everyone else here(most likely) and I have owned at least one (mostly 2) every gen since the NES. but this gen I have 0 excitement for it. because a PC I built in '08 should not beat a new "high end" console but it does. I can just pop in a new gtx 760 or even a 660 and be back gaming at 1080p 60fps on med/high settings and keep doing it for the foreseeable future.

TL:DR I'm an evidence driven person and Just don't see console being the best investment you can make for you gaming dollar

it can run Battlefield 3 and Borderlands 2 at 720p, both of which are titles that arrived at the end of 7th gen but still just before 8th gen gaming.

All the other hardware was easily available to match/beat the 7th gen in 2006.

You could have spent the cash and purchased an expensive pc in 2006 and played every game better than console until the final days of 7th gen where even then it is still equal. Seems pretty worth it to me.

Console vs pc debate is retarded.... Console is better with people at your house sitting on your sofa wanting to play with you. Pc is better everywhere else.

As someone who LOVES fighting games (i can't wait for Guilty Gear Xrd.... runs at 1080p/60fps on PS4, heard first hand encounters that it looks dreamy in real life!) and is looking forward to Kingdom Hearts 3 and Final Fantasy XV, i will be buying a PS4.

Life isn't about Shit VS Shit.

everyone needs a computer. and my console of choice was on sale for $350 the other day. that is chump change.

Buy what you LIKE! Don't try to enforce your beliefs on someone else. that is how wars are started!

I just came here for the comments.

you mean, you didn't come here for the ladies? for-shame TT_TT

So tired of this debate. *sigh*

Notice the OP has not replied...

I smell a troll.

Troll thread or not, thought I'd share this. I've been watching this guy's videos lately on the history of the older consoles. He lists a lot of great points with regards to why the older generations were [far] better consoles and I'd have to agree. This latest generation is just horrible. It used to be about the games and when a game was released it HAD to be good because you could not download patches or updates. Now they've made it about the resolution and frame rate, meanwhile the PC master race laughs as the xbox one and PS4 squabble like toddlers.

The trick is hooking up a PS3 controller or something compatible using a Sixaxis app. I glued a controller to an old phone cover using some bits of wood and plastic and I think the experience is overall a lot better than fiddling with the Vita button layout. There's ready-made solutions like GameKlip for that now.

I can use a real controller with any console emulations or map controller buttons to screen area to control apps that don't have controller support. Some titles work better than others, of course.

You can build a ~$400 build today that is stronger than the consoles and in 2018 will still be stronger than the xbone and ps4. I know I know I fed the troll guys but it has to be said, sure in 2005 pc gaming was more expensive but these days its cheaper and it probably wont need to be upgraded to stay ahead of the consoles ether yeah when new consoles come out you'll need to but so will console gamers.

Of course a 2000$ PC from 2005 won't be able to hold a candle to a 500$ console in 2009 or even a PC for that money. PCs were more expensive and the performance increase from NetBurst to Core architecture WAS PHENOMENAL, and right at that time PC parts prices started dropping. Current consoles are a joke and barely have any interesting games that are worth defending with the argument of "exclusives",end of story.

Prob no different from the hundreds of thousands of other Console vs PC threads. Honestly, at this point, I would prefer it if people would just Necro some old threads instead of wasting a new thread on something like this. Nothing has changed enough recently to warrant yet another debate on this.

Here is my response to all of this in video. http://youtu.be/pKeLDPV-imI

You got to remember it's on there OP benchmark test rig.