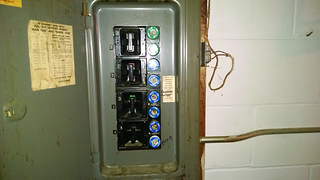 So here's my fuse box, and I had some questions about it. I was only vaguely aware of fuse boxes and circuit breakers growing up. Early on it was "circuit breakers are better than fuses because when fuses blow, you have to get new fuses." Cool, I'm down with that. I did learn how to replace fuses, so that's good. Now that I own a house with a goddamned fuse box.

I had to do some quick repairs on a light switch, and thought, "Y'know, this would be a good time to test what fuses go to what parts of the house."

Now I haven't gone around and tested each and every outlet in the house, but I have done a number of outlets, as well as all of the lights. My question comes in with the fuses behind the black boxes to the left. Right now only the middle two boxes are populated with fuses. Does this mean that only the 4 fuses associated with those 2 boxes are receiving power?

I don't feel like this is the case, because I'm 90% certain that the bottom fuse, marked "Furn" is actually responsible for providing power to the furnace. But the top two fuses don't seem to provide power to anything.

Also, from the top, the 5th fuse down? That little 15 amp fuse powers 7 computers, 10 lights (with the sockets to support 15 lights), a refrigerator, and a microwave. I really need to distribute the power in this house a little better. Thank science for LED light bulbs, amirite?

I have 2 fuses in a small fuse box for the 220 line for the water pump.
They last forever, just spent 1300 bucks to replace the circuit breaker panel.
They no longer make pennies out of copper so you can't use them anymore as a replacement.
They are fairly cheap at Lowes, unfortunately they never seem to fail. When a thousand dollar deep well pump stops working your like,"please please let it be the fuse"

When checking fuses it's good to clench a lightbulb between your teeth.
If the lightbulb goes on, you found a loose current.

First, where are you located? That can make a difference. My experience is in Canada. I'm far from an electrician but I have done some sparky stuff in the course of my renovation work. I'm not familiar with that type breaker box other than replacing fuses. From the pic it seems that you can cut power by pulling the second from top black switch. It will disconnect power from all fuses and house circuits but won't entirely kill power behind the panel. Once power is switched "off" I would pull on clean leather gloves [prevents shocks if accidentally contacting live wires] and purchase a non-contact electricity tester. Remove the gray metal panel. Then you can see if the fuses are connected to house wiring. There is also a tool that can send a small current from a socket that you can then test for at the fuse box to trace the wiring [some type of "tone" tool?].
Good luck.

Those kind of fuses you can easily see through the glass if one is blown open.

My guess would be that the circuit is overloaded. Check the wire type to your circuit that supplies power to your pcs. If it is 14/2 then the circuit is too light for the load you are placing on it. The ideal /building code should be 12/2 wire and a 20 amp breaker for receptacle circuits. 14/2 is basically a light duty use for lights / or small motors / single appliance use. Pop the cover panel on the box after shutting the power off my killing the main. Take a look. Always check and double check to make sure nothing is active before touching. Refrigerator and microwave on the same circuit as the pcs ?

Refrigerator and microwave on the same circuit as the pcs ?

Yeah. This poor house. I need to get this thing replaced, and get some more lines added. Breaker 5 powers all of the kitchen, all of the dining room, the basement living room (which is where the 7 computers are), pretty sure it provides power to the outside outlets, and it's marked as being responsible for power to the garage. Fortunately I don't have a garage door opener. I'm pretty sure it would be all over for this fuse if I did.

Fuse #3 covers the hall way, both bathrooms, all 3 bedrooms, the guest bedroom in the basement, the storage room (where I have my test servers), and the utility room where I have a chest freezer.

Really the only room left at this point is the den, which is provided power by fuse #6. Everything else seems to be on fuse 3 and 5. I suppose there's also the main living room, but there's only 1 light, and an LED TV there. Not really sure that I didn't kill power to it with either 3 or 5. Well, and the furnace itself gets its own fuse, so that's nice.

This thing is ancient... wow...You might want to think about spending some money and pick up a new breaker box with some new breakers, and just replace that thing.

Could you take an in focus pic of the diagram on the left of the box?

Power has to come from somewhere ? 30 amps normally carry heavy load items. 10/2 wire and powers Stuff like dryers and ac's

Could you take an in focus pic of the diagram on the left of the box?

Here you go. This clearly isn't updated because it shows that only black box #2 is populated, but #3 is also populated. 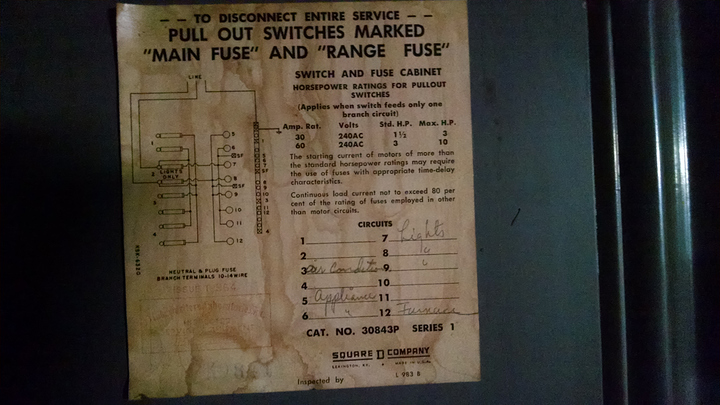 Power has to come from somewhere ? 30 amps normally carry heavy load items. 10/2 wire and powers Stuff like dryers and ac's

This is true, I didn't test to see if the washer and dryer were still getting power. If that is what they power, it would explain why nothing turned off when I removed the fuses. I'll go test that now.

Pull the front cover off and take another picture. Also, anywhere you can, you should try to get rid of that cloth covered cable.

Alright, so I broke out my trusty butter knife...Just kidding.

I went and got my outlet tester. The top 30 amp fuse does indeed power the washer and the dryer, as well as something else I could hear clicking off when I unscrewed the fuse. But I think this pretty well solves the question of whether or not those black boxes need to be populated in order to power the associated fuses. And that answer is, "No, they don't need to be populated." So at some point in time I should pull the 2 populated black boxes and find out what kind of fuses are behind there.

Still, a disproportional amount of stuff seems to exist on fuses 3 and 5.

Also here is the fuse box without the front panel, from several angles. 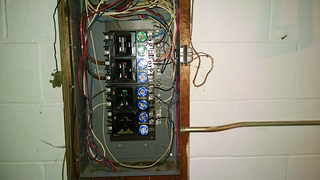 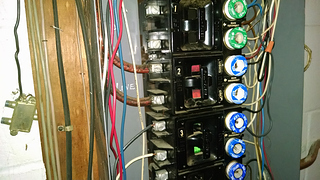 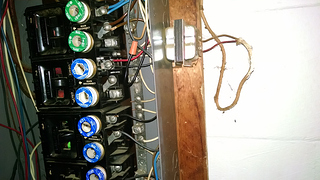 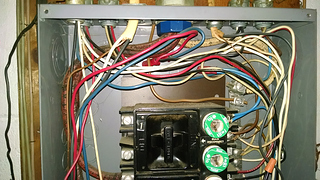 Also I hope to get this bad boy in place some day. 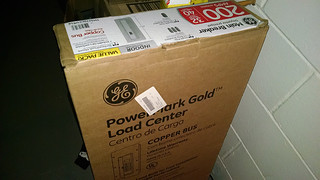 Have a well ? You are in better shape than i thought. The second is usually is Air conditioning. Central air ? or split into separate furnace / ac unit freestanding or window.

I meant water well with pump.

The second is usually is Air conditioning. Central air ? or split into separate furnace / ac unit freestanding or window.

Ah yes. Central air. The 2nd 30 amp fuse could go to the outside unit. Though it's interesting because there are fuses outside for the unit as well.

If i remember right ? That is a buffer so there is no chance of it taking out the house power since it exposed to the elements. A little water gets in the circuit it only trips back to the outside box and not all the way back to the main.

Pretty dangerous though, cable spaghetti and not automatic fuses, but what is most disconcerting is the absence of a differential fuse. Would it be possible to swap those two populated main high blast resistance ceramic fuses out for two differential automatic fuses? It looks to me like those might fit just fine in there. It would not be expensive and bring a whole lot of extra security. A differential fuse will also be tripped by abnormal losses, which not only prevents dangerous fire hazards, but also means you're not paying for electricity that serves no purpose, and it certainly protects devices from premature failure. It would also be really helpful if the cables were sorted and labeled. In a second phase, as soon as convenient, I would swap out the entire electrical wiring of the house, swap out the fuse box, install an external emergency circuit breaker for the HVAC, and swap out all of the switches and outlets. Modern wiring with modern insulation has less capacitance and resistance, modern switches and outlets are more secure and don't cause as much induction when switching or unplugging appliances, and have better ground connections. Old wiring often has degenerated insulation and has signs of oxidation on all connections, it's not only using more power, it's also heating up when used with modern appliances. Back when those outlet connections were made, there were no 4000 W appliances to hook up. The old wiring will actually get pretty hot when you plug in a modern high performance vacuum cleaner somewhere and the circuit hits its design limit, the old insulation does not agree with that, and might just disintegrate and cause a hidden short and smoldering fire somewhere in a wall.
Swapping out electrical wiring in a house is not that hard, because you can pull the new wires through the tubing with the old wires. If you wait until a wire burns through, it will cost a lot more.