Which "The Tek" episode would best inform (a govt. minister) about the misguided internet we have?

I can only get diap-up where we live even when theres fiber out my gate and I have tried everyone in this country (downunder and over the ditch) to connect us. Now I have finally managed to get the minister of communication to listen to my case, (and I thought pigs couldn't fly). So I wish to know which, one video of The Tek, would best educate her about whats happening about the internet strangle hold, what the ISP tell us and the truth about whats actually possible. Can Logan or someone who knows the Tek episodes really well suggest the best one, I intend to start downloading it and send her a screen shot of how many days its going to take. (its normally 2)

I agree with @Trikstari a study would definitely get you further however the Tek is a great way to educate friends, family, coworkers, and random passersby that you happen to abduct and lock up in your basement with a bottle of lotion and oops I got sidetracked. It puts the lotion on the skin or else it gets the hose again. . .

a Tek Video wouldn't help. but IF you really want a Tek Video about Information this is the farthest i would go.

Independent studies , like global warming? (usually miss out things like the obvious: subterranean volcano eruptions, googles servers) they only include the taxable. lay the bait and let the curiosity do the rest,surely, so would have to sink in even for a politician.?. Anyway I am looking for an episode that gives a wake-up call of the whole dictatorship industry is harming us. If it back fires, what the hell could be worse than 8KB/s download internet. (on a good night) lol

Thanks KatLeader, this one will take 21 hours to download lol Its improved 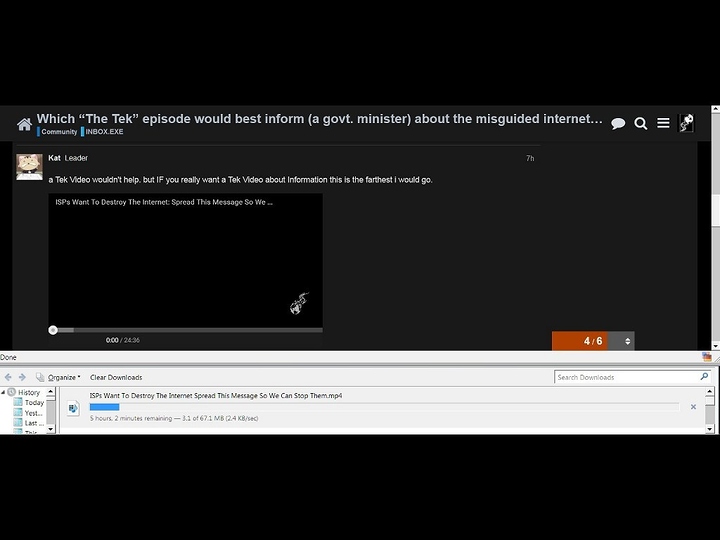 I'll assume you're residing in Australia (the reference to 'downunder'); at present Telstra (ISP) has a stranglehold on the Aussie (copper) network.

SIX strikes Against the SIX Strikes Plan is anything