Which speakers should I get? $500 budget Plus a sound question at bottom

I am currently looking at these 2 I like the look of the Mackie speakers better but the features of the Audio Engine is so much better than the Mackies akso they have really good reviews. I originally had a $400 budgetI found the Bamboo version for $70 more and think they look super sexy. 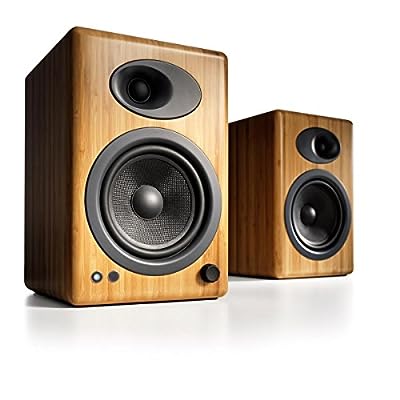 Audioengine 5+ (A5+) Premium Powered Speakers deliver audiophile-quality sound and features at a price that continues to set the standard for affordable high-quality audio. Connect your iDevice, compu ... 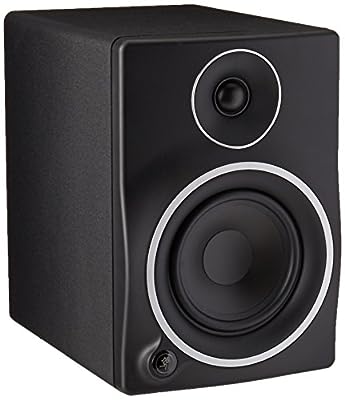 Just go to your local craigslist and search for boomboxes, it'll save you a lot of cash.

like an actual boom box or is that a brand? I get money from my school that I can only buy things needed for school and have to report everything that I buy but because I go to school for computer sciences I get to upgrade quite often so I don't mind spending the money. Which sounds cool but I have more important things i need to spend the money on like medical expenses but because its not for school I can't.

It was more of a joke, I'm not much of an audiophile, wouldn't even dream of spending more than 50 bucks on speakers. If it were me I'd spend that money on a laptop, or a PCI-e SSD.

I already have both of those have read my computer specs on my profile. So ready to get some nice speakers for my new desk setup.

https://www.bose.com/products/speakers/home_theater/bose-solo-15-tv-sound-system.html I would recommend these. My family has the older version in the den.

So you're already set up on your AMP/DAC front then? And did you already have like a 1440p 144hz IPS monitor?

kind of its a little different type of grant the fafsa you can spend on anything by the time I buy books and the stuff I actually need for school I have nothing left over from it, computer classes have the most expensive books out of them all. Amp/Dac? like a external sound card? No still using my T.V. as a monitor 55' Samsung 240hz, I'm tired of it and am building a desk battle station this semester. I have an open thread right now looking for a 4k 40" monitor for under $1000. All the 1440p large monitors I looked at are the wide screen ones and I don't like those at all.

The Klipsche Pro Media 2.1 system is a very well received speaker set. The Corsair 2.1 system was well reviewed, but there are some discrepancies in its frequency response curve. That curve is one of the things you should look at (if you can find one) for any speakers or headsets you wish to buy. Here is a comparison of some common 2.1 speakers including the corsair http://www.tomshardware.com/reviews/pc-speaker-2.1-channel-subwoofer,2835-8.html

In the frequency response curve, you can see the corsair 2500 having a 7db dip in the mid ranges. This is fairly bad. They will sound decent, but compared to its competition it isn't a good thing. Generally when shopping for speakers, you want to see the 'flattest' curve you can. Generally no dip or peak more than 5db away from the mean (industry standard is +- 3db).

Also to throw a wilder idea in here for the sake a something a bit wilder:

I went with a Yamaha RX-v377 receiver, and it has the ability to set up the surround channels in front of you, so that makes it waayyy easier to set up on a computer desk (and the surround works pretty good too).

Using a receiver works well if you aren't needing to use display port, or DVI, and you run the audio and video signal through your receiver via HDMI. If you need to run a display port, or DVI connection, than you have to deal with the receiver being treated as a ghost monitor by windows which is a pain to set up, but is manageable.

yeah I thought about that I'm just thinking about the Audio Engine 5+ they have really good ratings and have a sub out so will probably get a sub to add on don't know yet that's why I'm asking here.

So, why not get like an AMP/DAC kinda thing so your speakers have cleaner audio going to them, or whatever.

$500 for speakers, Most I ever spend on a set was about 1/5th of that. Sure hope they sound as good as they look if you buy them.

Amp/dacs are for outputting a signal to power a set of speakers (i.e. headphones). Sending an amplified signal into another amplifier can damage the second amplifier, and be a fire hazzard. With typical headphone Amps, this may not be an issue, but when you amplify a signal multiple times, any noise present will amplify and you get distortion. You can get this on PCs sometimes, by having Windows master volume maxed, the windows volume slider for the program maxed, the programs internal volume slider maxed (and your volume knob on your speakers set to a reasonable listening volume).

A more pressing concern would be shielded cables. Many all in one "self powered" speaker systems are running analogue signals from the jacks in your computer over relatively long cords to the built in amplifier. This signal is on an imbalanced connection (balanced connections automatically filter out any noise picked up by the cable) So you can pick up 'hums' depending what devices or power cords your speaker cables are lying across.

For a typical home theatre system, you would run the audio source over HDMI which is a digital signal so it is not subject to picking up noise. Then the unamplified signal to your subwoofer (via sub out) generally should use a shielded cable. The speaker cables are sending an amplified signal to the speakers, and the intensity of the signal generally drowns out any noise picked up by the wire (to give you an idea of how much more intense it is, an amplified signal over a speaker cord will give you a shock ).

You get what you pay for with speakers, and generally get a decent return on investment going up to $1000 (in home theatre that is). After that you could probably see diminishing returns kick in.

Computer (self powered) speakers are a little weirder, mainly because they build in their own amplifier and they could cut corners on this (and usually get away with it). The amplifier can have a direct impact on sound quality, and this is more closely monitored in the home theatre market by consumers of AV receivers.

Now a days there are enough experts doing review of speaker systems to keep manufacturers honest for what they are giving for the price. I used to like Bose, but they seem to peddle snake oil more than quality products (experts reviews have shown measurements and other data to show that they are not worth the money).

In the end, comparing frequency response curves for speakers between different sets, and looking at how much improved flatness to the graph is gained for the money is a good start to shopping. The curves are not the be all end all comparison, but it cuts through the voodoo of what a speaker manufacturer claims, and precisely shows the performance of a speaker, thus making it easier for the average consumer to get a grasp on how it actually performs.

I spent quite a bit on my Infinity surround sound for my TV I didn't pay full price did a lot of Ebay shopping all together it all retails for over $2000 but I payed under half that but I can tell you it sounds amazing worth every penny. I just don't have a lot of experience with computer speakers mainly home surround and car audio. The Audio Engine 5+ is the top speakers recommended on many review sites, that's what interested me in them they reviewed the $400 ones but I just really like the bamboo ones and am willing to pay the extra money. I was just asking because I like to always get peoples opinions before I buy I am a very cautious shopper so I always am happy with what I get.

Klipsch is pretty much unbeatable around the $500 price point.

A pair of Klipsch Reference Series R-15M for $350 and then a $150 receiver is going to give you the best experience for that price, in my opinion.

My Ex is a recording artist and they sound amazing for the price, that's why I've been looking at studio monitors. They are super accurate the if you add a active subwoofer they sound "F"ing great. Klipsch is stupid expensive.

The Audioengine are probably pretty good, I just never did look into them much, which is the reason I haven't really said much about them.

The Klipsch 2.1 PC speaker system is a decent price, but I can't speak for how much their performance would compare for the price to the Audioengine ones.

Also on that note, the Monoprice 10565 speakers I mentioned are a direct rip off of the Energy Take Classic 5.1s (Energy being a subsidiary of Klipsch), so they bring that quality into a more affordable price range. (Again this is a more unusual approach, for the same of throwing in something different)

I know, I'm open to check anything out. I just feel I have fallen in love with the bamboo cabinets on the Audio Engine even tho the wood option is like $80 more They just look so good and computer speakers look no where near as sexy. But I'm still willing to check any and all recommendations out. If I do end up buying them ill make a full review and video so I can let people in the future know if they are worth it.