I'm putting together a system build for Broadwell-E gaming. I'd like to play the latest AAA titles, but I don't care for 4K or max settings. Just 60+ fps with newest games at 1080p resolution. I'd also like to keep the budget on planet earth. I'm looking at a budget of around $2500 for everything (including new monitor.)

I was originally going with the GTX1060, but the latest performance numbers were less then I'd hope they be, but those numbers were for titles on DirectX12 at 4K resolution. I know the 1080 is (currently) the top dog, but so is the price.

Is there a site that has 1080p performance comparisons of nVidia GTX GPUs?

Also, I really don't want any AMD card. I have an AMD system right now, but I'm not at all impressed with them. (Drivers, mostly is my complaint.)

Also, I really don't want any AMD card. I have an AMD system right now, but I'm not at all impressed with them. (Drivers, mostly is my complaint.)

Would be nice to know what your current setup is as I am running my FX-8320 & R9 Fury without any problems. 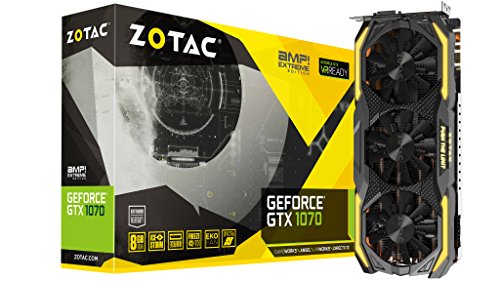 FEATURES All-new SPECTRA lighting system Customize the look with a color to match your system using the all new, redesigned FireStorm Utility 8 brightness levels to have it lit just right Different li ...

The GTX1060´s lack of SLI/CrossFire support makes it worthless for highend systems (judging by overall budget). For the GTX1080: I do not see ANY point in that card. The price is to high and the TitanX(Pascal) &1080ti are on the horrizon.

With more and more Vulkan games coming, I would not buy any Nvidia card. They gain a little bit, sure. But AMD cards gain >25% across the line

I currently have a AMD A8-6600K APU. It has an integrated GPU, plus a discreet card I put in. Current graphics is: AMD Radeon HD 8570D + HD 6670 Dual Graphics. Using Catalyst version 15.7.1. I have 8GB RAM in the system. I put this system together ~3 years ago on a budget. ($600 including a new version of Windows 7 Home.) It plays older Steam games fine, but I'd like to play the newest titles, hence my question.

On Windows 10, the Catalyst drivers are stable with the exception of HDCP support. I own a registered version of Cyverlink PowerDVD 15 and it won't play BluRay discs. Looking into it, I found a lot of folks who are using Catalyst 15.7.1 have the same problem. Before that version, BluRay playback worked fine.

Also, currently I do not plan to use SLI. One GPU is all I need. I like games but I'm not a serious gamer who has thousands to blow on hardware.

Basically this. From economical stand point of view AMD makes more sense than nVidia. You get more performance per unit of currency.

AAA titles, but I don't care for 4K or max settings.

To me this says the RX 480 or GTX 1060 would be the best fit for you if you are sticking with a 1080p gaming resolution. The money you save would be better used for something you care more about - like a better quality monitor.

Ninja85a - thanks, I wasn't aware there was all new drivers for the AMD cards. I haven't paid any attention to AMD recently since I have no intention of buying AMD. I'll look into Crimson drivers for my APU setup.

Also - in regard to my aversion to AMD drivers: I currently have an odd issue with my existing AMD AHCI driver for my mobo (MSI FM2-A85XA-G43). I have a few VirtualBox VMs with various flavors of Linux. 2 instances of Oracle Linux 5.9 - whenever I do a 'yum update' the hard disk activity goes to 100% and the average response time climbs to the 20 seconds range, and stays there. (Yes, 20 seconds, not 20 ms.) It takes several hours for the 'yum update' process to finish. It doesn't happen with my other Linux VMs, only Oracle Linux 5. Working with folks on the VirtualBox forums, we've managed to narrow it down to the interaction between VirtaulBox and my AHCI driver. Still don't have a root cause as yet. Very weird problem.

But this topic is limited to GPUs so I (likely) won't have this problem after I build my new system.

Have you tried updating the bios and defragmenting the HDD?

I'm running a 960 currently, which handles gaming in 1080p just fine. So really, any of these cards you're looking at would be above and beyond your expectations for the type of screen you're looking at.

980ti is a no brainer, if you can still find one. They're selling for cheap now.

I have a 1TB Western Digital WD10EZEX SATA disk, using about 300GB or so of 950GB formatted. Defragmentation is not needed. In fact, Defragging hasn't been needed in modern PCs for some 10 years or so.

with proper implementation of dx12 and vulkan you will see amd gaining a lot of performance, and i wouldn't be surprised if at some time 480 beating 980ti... at dx12/vulkan.

A 1060 would be more than enough for 1080p. The rest are a bit overkill unless you have a monitor that you make use of higher than 60 FPS.

Your problem is rather interesting. Mostly because you do have (kinda)valid complaints against AMD.

Firstly using dual graphics what you actually have is a very low end crossfire setup which brings with it all the crossfire/sli issues but doesn't result in huge gains.
Neither of your gpus can play acceptably alone but together they can? So you NEED the drivers to work right 100 percent of the time.
You would have the same issues with 2 low end nvidia cards in SLI.(not sure those exist, but i digress)
Any single competent gpu will be a huge improvement over your current situation. Pick the manufacturer you trust of course but price/underperformance would be my advice.

Also bad drivers for AHCI shouldn't be related to GPU choice, nor AMD for that matter. I believe that's the responsibility of your motherboard manufacturer.

Furthermore AMD CPU management/engineering is becoming increasingly separated from AMD GPU engineering/management. I wouldn't blame one for the faults of another.

That's like me not buying an LG TV because I dont like the bundled software on their android phones.

While i feel for your problems with your current rig i implore you to be more open minded in regards to hardware purchases.

Noctuas NH-D14 (or D15 for that matter) and BeQuiets DarkRockPro3 are same performance as single rad AIOs at same price with the bonus of lower noise and less points of failure.

i'd still take aio - more space, more control over temps inside the case.

Whatever floats your boat, I guess. I like to have direct aircooling.

it floats my TFlops.