Which HDD to get?

Recently got myself an Samsung 850 Pro SSD and now I need a nice, large 2TB drive for my programs/games and some other stuff. (not pron, that goes on my 6TB drive lololol)

My preference is WD but I'm good with Hitachi/HGST too. I keep hearing about the Caviar Black but people say it's loud and it's also quite overpriced. Is it really worth it?

I'm considering a red drive at the moment, I know it's for NAS use but would it be bad for Programs/Games in terms of speed? I'm not really that bothered about loading times, but I don't want installations/big transfers to take too long. Something in the middle ground would be great.

In some cases the Blue actually out performs the Black.

The red will be bad for a select few games... It'll make your fps seem like 1/2 of what it really is if you use crazy 2k+ texture mods in Skyrim like I do or any other modded game for that matter (maybe even future titles a few years down the road?). It took me near a year to diagnose that a 5400 rpm wd green 2tb was real my issue since other games didn't have a problem. I now use ram caching to compensate, however with 'normal' games you shouldn't notice a performance hit just some slower load times. It's nice and whisper quiet though and I do like that :)

I was going to get the blue, but then discovered the max capacity for that series is 1TB.

Seagate would be the obvious choice but many people (including me) have had a lot of HDDs of this brand die on them. When I built my current PC I had to choose between the Seagate Barracuda 7200.14 and WD Caviar Blue (both 1TB). I just don't trust Seagate enough anymore to use their drives on a daily basis.
I'll need a new 2TB (or more) HDD too very soon and I think it will either be a Toshiba, WD or Hitachi, but not a Seagate.

You should grab a black series because the are newer than the caviar and actually out perform them.On top of that they are extremely reliable.

Do you own one? The only reason I don't want to get this is because it's quite overpriced and I've heard that they can be extremely loud drives.

I'm definitely looking at Hitachi right now. The WD Blue would be a great option but it doesn't come in 2TB which is annoying. I think the K7300 seems like a decent option.

Try a HGST (Hitachi) Deskstar NAS.  They're different from WD reds and Seagate NAS drives since they run at 7200, they'll work just like a typical drive!  Plus they're stupid reliable, and pretty cheap for a 3tb.

+1 Hitachi's, far removed from the trash that was around 10 or so years back.

I personally go for the 2TB WD Green drives, they preform pretty good for my needs. Games...not so sure a green is good for that but games should be on SSD's if you can help it.

Greens work better for surveillance use. Can be ran 24/7 and more efficient for that standpoint, and Red is for Nas.

Blues and blacks in the WD line are your better bet. Blacks are better overall build quality (hence warranty) and have larger sizes. Blues have the 1tb and lesser sizes, but still solid.

Hitachis and Seagate, etc. are also decent, but it is all down to personal brand preference

EDIT:
I was wrong, purple is for surveillance, green is something else. Still not as useful for you as a black or blue would be.

Aren't the WD Purple for surveillance and the WD Green more fitting as regular "stuff I'm not using all the time" data graves?

Western Digital over Seagate every time because of reliability and lower failure rate.

Seagate bought Maxtor many years ago. Maxtor drives were horrid I've heard, even after a few hundred hours the Seagates' seem to slow down. Western Digital has been my choice for past 4-5 years. I have had a few Seagates too, but they died and my brother just had his die last month... (I've worked with several customers who had Seagate drives die on them, my staple replacement purchase for them is a WD Blue 500GB-1TB on sale - depending on the space needed)

I don't have any experience with Hitachi drives though and haven't heard to much negative about them either.
Currently own 3 WD drives, 2 black and 1 green, if your case is not super open you might not find the blacks to loud, specially if tower is under your desk. 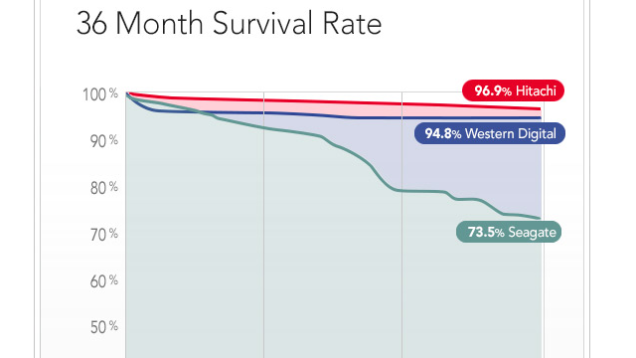 image is from a Lifehacker article here

I feel the same about WD and Seagate (had 5 Seagate drives in total, not been very satisfied, but my 7yo WD MyBook works like a charm, despite having been used as a media-drive with sometimes hours of use).
Can't say much about my 2x WD Blue, only had them for ~1year now (although one of them has some Seek Errors).

From what I've read Hitachi drives are supposed to be the most reliable (but that doesn't mean they can't fail too). Just ordered a HGST Deskstar 7k3000 and Barnacules Nerdgasm bought a few 7k4000 to upgrade his NAS.

I don't know how accurate Backblaze's statistics are. The test-circumstances don't seem equal since they didn't use the exact same amount of each brand and/or modell. And there's always the chance of simple bad luck.

You shouldn't take this chart as a 1:1 comparison, since the amournt of drives was not the same, so 10% of HGST drives are not the same amount as 10% of WD drives and thus not really comparable.

I had a Seagate drive in my main desktop last just over 4 years. The WD 2.5" drive I got from a 5 year old laptop is disconnecting and clicking.

While I have had better luck with WD, neither are faultless.

Personally have had good luck with Toshiba but I have only owned two drives from them.

Red is for NAS and Survielence. Green is for every day stuff.

While the WD Red, Green and Purple don't seem to be much different hardware-wise, the Purple and Red come with software for their field of use (NASware -> NAS and AllFrame -> Surveillance).

Depends on what you consider "every day stuff". I've always seen the Greens more as a "I put my data there but don't use it very often" kinda drive. I wouldn't put my video files on there and watch them, but rather use a NAS drive for that.