Where can I buy some very low profile RAM DIMMs?

I need to get some ECC DDR4 VLP DIMMs to fit under the heatsink on my ASRock Rack X470D4U. The heatpipes on the Noctua NH-U12S block full height sticks in the slot closest to the CPU socket.

I’m looking to get some sticks like the below InnoDisk and Apacer parts:

But I can’t find any consumer stores that will sell them. If anyone knows how to buy theses parts, or similar, I’d appreciate the link. I’m in Australia, so preferably a store that ships to Aus. But since it’s such a niche part, I can go through a USA shipping forwarder if I have to.

Thanks for the suggestions. I’ll try to remove the heat-spreader first, and do some precise measurements while im at it. Hopefully some ECC sticks that come without heat spreaders will be just short enough to fit.

This machine is a multi-purpose server, so I do strongly prefer ECC.
I’ve tried rotating the NH-U12S in the past, but there is a slight but noticeable noise increase. This server is in my bedroom, so it needs to be a quite as possible.

Server in a bedroom — ouch!

Out of curiosity, what case are you using?

Here’s a crappy photo of the situation. Even the next RAM slot barely clears the stick. Now that I’m looking at it, even the low profile sticks I linked might not fit. 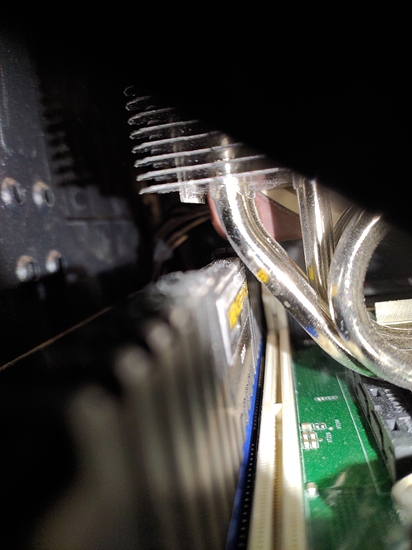 Can you rotate the cooler 180 degrees? sometimes they’re asymmetrical for this reason.

Another option would be to rotate 90 degrees if there’s no GPU clearance issue.

Another pic. Measuring 19mm (the height of the low profile sticks I linked) on the other Corsair LPX stick I pulled out, and looking at where that point is in this pic, it might actually still fit.

19mm on the LPX stick is just under the Vengeance LPX label. 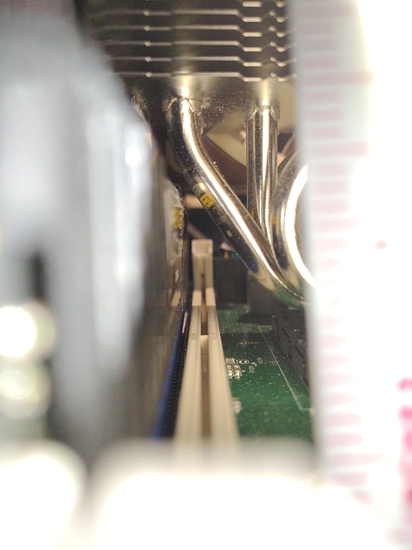 Can you rotate the cooler 180 degrees? sometimes they’re asymmetrical for this reason.
Another option would be to rotate 90 degrees if there’s no GPU clearance issue.
EDIT: 90 degrees probably won’t work because AMD mounting mechanisms…

The heatpipes on the other side of the cooler still stick out just as far, they’re just in a different order. 90 degrees does work, the Noctua mounting kit will let me do this. But it increases noise on a machine that needs to be as quite as possible.

I found this Supermicro part, and it will let you buy individual units.
https://store.supermicro.com/32gb-ddr4-2666-mem-dr432l-cv02-eu26.html
I think It’ll fit, but I might try find an old stick that’s the same height and check it does before paying to have it forwarded all the way to Aus.

One other possibility: You could get a copper shim (probably cost < $20) and place it between the IHS and the cooler. That would add a fraction of a °C to CPU temps, but it would also raise the height of the cooler by 3–4mm — which might be enough to help squeeze your DIMM under the heat pipes.

I might just buy one of those Supermicro parts anyway. My server is currently 2x8GB, so a single 32GB stick will be a capacity upgrade, even if the memory speed and latency isn’t as good as the current Corsair sticks. If it doesn’t fit under the heatpipes, I’ll still be able to use it.

If I can get new RAM for my server that can fit under the heatsink, then I know I’ll be able to populate every slot, should I need to in the future. But it’s probably unlikely that I will. 2x32GB is probably more than I’ll ever need.

I appreciate the suggestions everyone, but I’ll just decide if I want to splurge for the Supermicro part, or just get some other full sized sticks.