What to buy? asus Vs gigabyte?

ok so i wanna know which one of these two are the better one to buy? i do video gameing and video editing i plan on upgradeing my video card at a later time but for now what should i get?

and in the other corner we he the challengerrrrr gigabyte
http://www.newegg.com/Product/Product.aspx?Item=N82E16813128509

The ASUS M5A99FX Pro gives you a better bang-for-the-buck; plus, I think it gives you more overclocking options in the BIOS, but don't quote me on that.

The ASRock Fatal1ty 990FX is about the same price, but, I can't speak for ASRock boards from experience.

Asus makes bad boards; recently they've been riding their name only. Gigabyte is no1 at this moment and even overtook ASRock. so yeah. final decision up to you.

yeah, they do make bad mobos...

@bluedude30
The ASUS board is fine. i would recommend that. it's fine and the BIOS GUI is pretty good.

The amount of boards sold does not, by necessity, equate the quality of the board.

I have had a DOA Asus board, but the shipping box was also slightly smushed. Yeah, RMA'ing sucks, but it's all luck of the draw. The replacement board worked great. The only other negative thing I have heard about the quality of an Asus board was some guys pedantic rant about the mosfets on some certain type of board.

Kat, problem is that 2-3 years i've ago met with numerous people working for their rma company.
and asked for their opinions, and they've told me.

But i myself owned 3 asus mobos (not the cheap ones) and few gigabyte, msi and biostar's.

What I've noticed is, poor quality of plastic, bad&cheap design for ram slots locks.
Gadets, make things complicated and when issues arise all hell breaks loose; as there are many i/o addresses being shared with other devices. Like PCI-E 1st slot shares slot with raid controller cutting it down in half when in use; while it would have less impact if simply taken io's of last or 4x pci-e ports by simply turning them off. And few other stuff like that makes it complicated to feel out whats actually going on, or whats wrong with it.

Motherboard should be made simply, durable and main components should not share io's with some extra devices.

Two, three years ago.. RMA'ing thats different, I've heard nightmare stories when it came to ASUS, but it was mainly with GPU issues on the AMD side, or if people bought Low-end motherboards, which I'll admit ASUS makes terrible low-end boards, it's almost embarrassing. but in this specific case of motherboards choice, I've never heard ANYONE complain about this specific motherboard, Pistol has used it and had no issues even with her old 9590, and we have A LOT of members on the forum who have this motherboard and have had no issues. that doesn't mean i don't believe you. but you are the first person i've ever heard complain about this motherboard.

The most recent asus mobo i had is:
P8Z77-V PRO -- as mentioned in my post, it has following problems listed above.

Same thing goes on with their monitors, and gpu's. Recently they've been riding their name.

If you dig deep enough, you'll find people with issues with anything. (Isn't there a thread on this forum riddled with complaints about Gigabyte boards, particularly the 990FXA-UD3 and several of its revisions*?)

If you can provide evidence of shared I/O addresses affecting performance and productivity, that would most benefit to potential buyers. Shared I/O addresses are outside of my domain of knowledge, although I comprehend what you are talking about. On the similar page, though, Asus has won out on recommendations in motherboard round-ups on sites such as Tom's Hardware and Xbitlabs for having having a more interactive BIOS, and a better lay-out for its feature-set.

When RAID controller is enabled your PCI-E 3.0 x16 is reduced by half to x8
(if you are in CF/SLi its downed to 4x)

Quote from their page,
"*4: The PCIe x1_2 shares bandwidth with SATA6G_E12. SATA6G_E12 is enabled by default for system resource optimization."

// the wind is changing, it seems. I know asus has delivered some good parts in its history, but new directuII is garbage... server motherboards break too fast (we already in company had board thats been rma 4x , and its expensive as hell), monitors came with low quality testing... after 5-10minutes of running new monitor had dead/stuck pixels had to rma it twice already... and on and on. I don't buy cheap stuff, but when i fork out 800$ + on monitor 1440p i expect it to work without stuck/dead pixels for at least 2years... not less than a day or week of use; and tell me they don't see anything wrong with monitor on rma... and i have to show them exact pictures of massive amounts of dead pixels in the middle and corners...

Isn't there a thread on this forum riddled with complaints about Gigabyte boards, particularly the 990FXA-UD3 and several of its revisions*?)

Asus has won out on recommendations in motherboard round-ups on sites such as Tom's Hardware and Xbitlabs for having having a more interactive BIOS, and a better lay-out for its feature-set.

I understand that, and i agree with it, i've had my Z87 Gryphon for almost 2 years, I've never had one issue with it, well honestly the only issue i have is that the Phone charging dedicated USB 3.0port doesn't stay at full speed, i have to manually set it to fast charging all the damn time which sucks.

I went to the Asus product website, for the Asus P8Z77-V PRO, and took a look at the Specifications section.

If I am interpreting this correctly, the note that is attached to the PCIex16 3.0 only utilizes the 3.0 if you have the appropriate generation processor. The "4" refers to the the short PCIe slots that are above and below the first PCIex16 slot, specifically, the one right below it. Since you average user would have a discrete graphics card in that slot, that slot is, mostly likely, not going to be used anyway. (As for why it is there, then, not entirely sure.) Still, this cited issue is no where near as bad as you originally stated.

Here is the website, so everyone knows I am not misquoting: http://www.asus.com/us/Motherboards/P8Z77V_PRO/specifications/

Did Asus not have this posted on their website when you purchased this product? Or did you find out after you bought it? (If the latter, how is it such a thorn in your side now?)

What of these other gadgets mentioned that cause problems?

and highlighted hurts me the most. 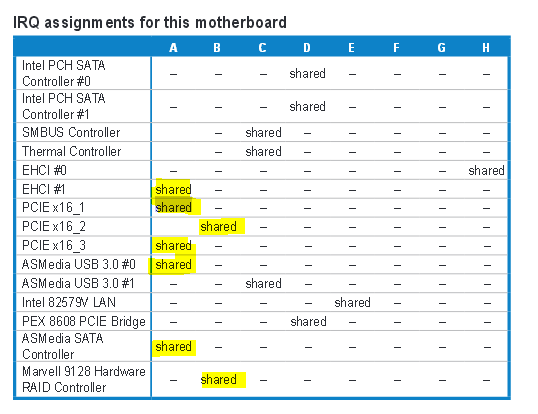 ever had issues with usb? try having it on shared irq with your gpu's.
or dying hdd on same irq as your gpu's. 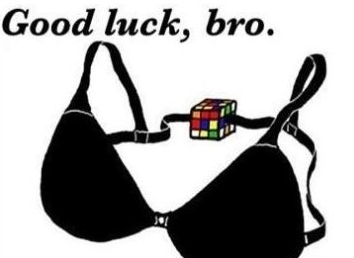 The text above that table, and the diagram on the previous page, shows that the RAID controller and the PCIex1 slot are what share bandwidth. (Again, not the PCIex16.)

IRQ Assignments are not shared lanes, or whathaveyou, although I can see the confusion and why you did say I/O assignments beforehand. IRQs are definitely a different beast, though, and I do believe one can fanagle

Does Gigabyte offer similar tables? I can not seem to find it in the manual, given the time I have.

EDIT: Ah! I was lucky enough to find this German review of the Gigabyte GA-990FX-UD7 ( http://translate.google.com/translate?hl=en&sl=de&u=http://www.planet3dnow.de/vbulletin/threads/404723-Gigabyte-GA-990FXA-UD7&prev=search ) and I do believe that they IRQ Assignment table does show that the motherboard is sharing assignments between the PCIe slot, and the RAID controller. I am assuming it is the RAID controller, because the AMD SATA controller is further down the list, and it is shared with the Audio controller.

It is sharing pci-e x16 [1st port] and thats very bad. I can produce some ss once i head back home. It is very bad design; if i had 3 gpu's it would run at 2x if i wanted to run with Marvell sata controller.

they do share i/o assignments [but i don't have access to my pc to debug those info]
IRQ's are also shared. and this is intel ivy bridge chip, not amd.

Well, I look forward to the production of evidence.

However, whether the board I provided as an example is Intel, or AMD, is irrelevant. The original statement was that ASUS makes bad boards, with the reasons being for the certain type of shared resources/poor design. I provided an example of a high-end Gigabyte board not only doing something similar, but doing pretty much the exact same thing. Does this mean Gigabyte make good boards, or bad boards? Do we have to run down the list of every board they have made, and see their stock IRQ assignments to find out? Obviously, that would be excessive.

I'm just saying that you made a statement, and we're asking for evidence - and I'm meeting you in the middle on this by providing some of it. So far, we have yet to make an actual confirmation to make it positive.

i have not brought recently gigabyte, but meaning people are buying up more of them means they perform and are better than their competition.

It is very relevant since intel cpu's have more lanes than amd's. I'll provide evidence soon, my shift just ended at work; once i get home i'll make some ss.

out of 9 pcs ive built on asus,
only one board was screwy
(one had a bad sound chip or something and was effectively mute)
and the other one i dont count because my friend has some literal electronics curse,
( we even just got him a brand new gtx780ti and now like 4months later its messing up too , no bullshit curse)

but im an asus fanboy
for sure.