So I have used Ghostery for a long time, and then I saw this: Ghostery is spyware
It got me thinking on what extensions actually are safe to use and what should be used if you want to protect your privacy.
Today I use the Vivaldi browser , which I really like and the team seems to be posting the source code every now and then. I also don't use anything from google except youtube, my go to search engine is startpage. I don't any social media like facebook, twitter etc. The extensions I use are: uBlock Origin with privacy filter, self destruct cookie and HTTPS everywhere. Is there any need for extensions like "privacy badger", "Disconnect" and so on?

Or wait we talking about Vivaldi?
Didn't knew it had similar extensions like Firefox branch.
its getting highly popular..
Or i must be sleeping.

It's built on chromium, so all extensions for chrome will work just fine. :)

Noscript for firefox, umatrix for chromium deritaves, since 7 times out of 10 it's the third parties that handle the tracking

Basically this plus NoScript. Mind you lot of stuff will be broken because javascript is used nearly everywhere. Also Firefox has a very nice extension called Privacy Settings by Jeremy Schomery which changes the entire config of FF with one mouse click. Without it you would have to turn on/off each function manually.

I personally use Ad Nauseuam. It's essentially uBlock.

Also, it creates this (imo) cool image collage of all the ads it's clicked. 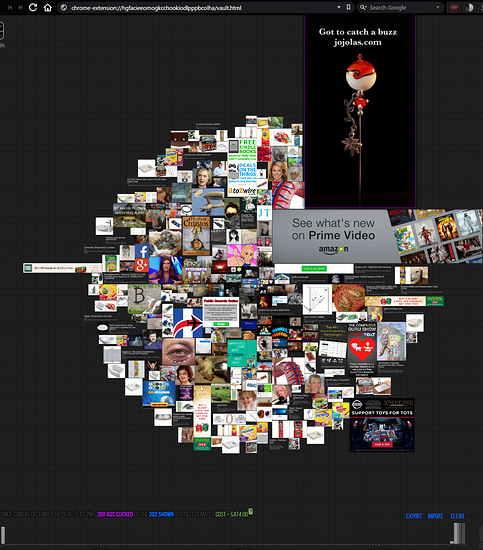 Other than that, I use ScriptSafe to manage what can and can't run on my pages. Usually enabling only what I need to make the actual services work and leaving most ad-specific or information mining things blocked.

Alright, well I have tried no script before, but it get's in the way all the time, almost every site break. As I'm a software developer, I tend to visit alot of different sites all the time, it really gets annoying. Beside I just tried out Privacy badger, but It does not block anything, probably beacuse my cookies get cleared instantly when I close a tab.

Same stuff as everyone else but I'd also suggest random user-agent, it spoofs the browser user-agent randomly which makes it harder to track you by your browser fingerprint. If you use a bunch of extensions like these then it makes your browser more unique, which makes you easier to track.

Also I prefer umatrix to noscript, it does the same thing but gives you much more control over what gets blocked and what doesn't. Plus it's default is to allow scripts from the first party site which means that most sites work okay without having to fiddle with it too much.

Just tried it, works like a charm! Noticed it has built in agent spoofer aswell. :)

Just an FYI, ScriptSafe has a section in the settings for that.

You can get really specific in how you spoof your agent, or you can leave it random, or blank.

Pretty useful imo. Then you only need 1 extension for both script blocking and for agent spoofing.

I should point out that agent spoofing when allowing HTLM5 to run in your browser is ... harder than normal.

HTML5 Canvasing is a major hole in that type of security, though there are ways around it.

I don't like it. When it spoofed my browser to safari in OSX adobe tried to give me flash installer for OSX. And that's not what i use. So I had to turn it off.

I second this. And https everywhere and privacy badger is developed and maintained by the EFF, so you can be reasonably sure there are no hidden agendas. Also, the privacy badger maintainers are very responsive to user requests and bug reports in my experience.

Seconding HTTPS Everywhere, umatrix and Random Agent Spoofer. Umatrix is very fine-tuned, you can get specific almost down to the individual script level of what you want to load. I also think its interfce is very intuitive.

RAS can do a lot more than spoof your useragent. I keep most of the options on. It's probably the single most useful addon I have installed.

I also like SSLeuth, useful not so much for telling whether your conneciton is secure(if it's https, it usually is) but for telling if the website admins know what they're doing security-wise. This site, for instance, has a 9.0/10. Very good.

I'm not sure on the "malicious ads" problem, but there's a whitelist for URLs in Ad Nauseam.

That second issue though, I'm not sure. I wonder if there's a blacklist for "don't show these ads, and don't click them if they're from this URL."

Yup was in for the uMatrix shout out. That this is amazing but can take a little set up at first. Not for the casual I want tus page loaded right now types. I think YouTube took 5 minutes and 10 or 12 refreshes till ingot all the right sources cleared to make it work right again but now it is better than ever.

Sad there isn't a pre done list for that makes the most common websites work.

And then it comes to trust. If such a list existed who maintains it and what's to say advertisers will not set their own list or pay off maintainers to whitelist their sources.