What is the best Osciloscope Under $200 USD?

Title pretty much says it all. Getting into Electronics repair (music equipment mainly) and it looks like I'll be needing to graduate from my army of frankenmeters to do work on some of the more fiddly stuff. I don't need exemplary bandwidth, high sensitivity logging or software control really, just a reliable and reasonable piece of kit. Portability isn't an absolute must but a big plus as well. Any input is valued and appreciated.

No idea how good this is. The other stuff Rigol makes is great tho. 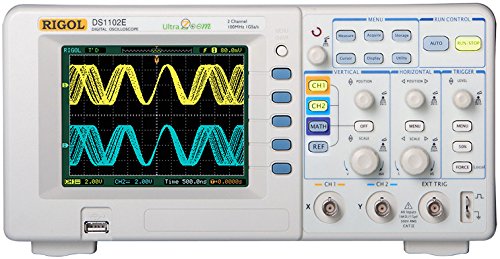 This Rigol DS1102E Model is economical digital oscilloscope with high-performance, which is designed with dual channels and 1 external trigger channel. It provides 20 types of wave parameters for auto ...

Proud owner of this sucker: 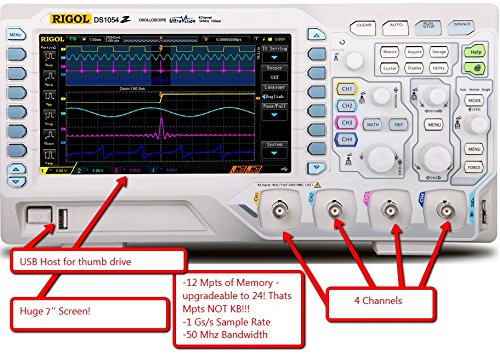 Rigol DS1054Z       Best Selling Oscilloscope Find out with the DS1054Z is one of the top selling oscilloscopes in the WORLD since its release in September 2014. Read the reviews! Let our customers te ...

nice! the first one is upper range for me but I'll add it to the list, second one busts the budget. Portability is also a factor for me, forgot to mention that at the start.

What you using that beast for?

I got a Rigol DS1074Z-S myself and it is a very usable scope for the price. The DS1054Z is similar, a little less bandwidth and no built in signal/arb generator but much cheaper.

The DS1052E/DS1102E were hugely popular a few years ago. They practically have been replaced by the DS1054Z because that model is better in almost every way. Both scopes enjoy their success because both can be "upgraded" (coughs) to their higher model ones. This made them popular because people would buy the 50MHz model and acquire the 100MHz via this "update".

In fairness, both Rigol scopes are surprisingly good value anyway and their build quality seems very reasonable. Of course a Tektronix or Agilent will be even nicer, but their comparable feature set scopes will probably cost 4-5x as much.

I understand budget constraints, but if you can I would get the Rigol 1054Z. It's intensity graded display is an absolute pleasure for any AC signal. However I use my oscilloscope mainly for development and debug for my own boards, and so probably will value the more advanced features (e.g. serial decoding, advanced triggers, more memory, etc.) much more than is worth for repair work.

The E-series scope will probably get the job done as well and won't fall apart after 5 years time, but it's not the best bang/buck anymore today.

Portability is hard at this budget level. I believe some Owon "bench" scopes can also be equipped with an internal battery (as seen in this Youtube video), but in short the build quality, performance and functionality were so poor I honestly cannot recommended that model.

You could maybe also look at mikeselectricstuff channel for some oscilloscope reviews. Beside his very expensive bench scope, he also keeps an eye out for portable scopes (like "handheld" scopes - not much cheap bench scopes):

The EEVblog channel also has more (in depth/long rambly) scope reviews, in particular from both the Rigols but also Sigilent and the "big name" brands Agilent/Keysight and Tektronix (which are out of budget I know).

Good info. I'll mainly be dealing with solid state amps (musicians give them away because they tend not to be super technical and can't pop in a new tube like the other kind) which makes them a great value for refurb. Since there's not a lot of fine detail except on the DSP type repairs, I really only need it for one or two things, so cheap is tolerable for me.

are there any firmware hacks for the Rigols yet? software based upgrades are bull hockey.

This doesn't have to do with Oscilloscope, but is useful for looking at tiny things. 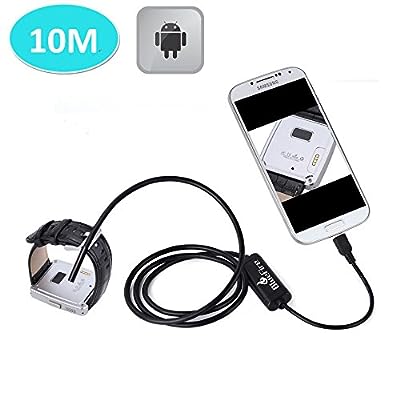 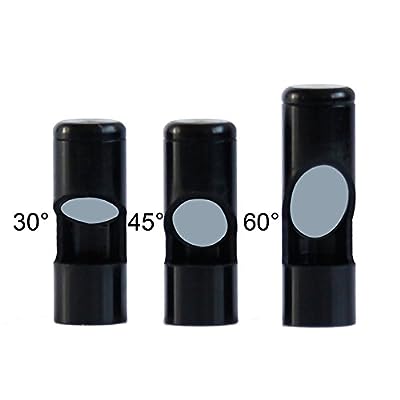 The lenses are for seeing around corners if you use the boroscope for stuff like clogged pipes, fishing wires in walls, or looking in things without taking them apart (like a motor for a siezed piston).

Pretty useful for looking at electronics for damage since they are meant for close inspection.

You probably don't need the 10 meter version if you aren't using it for things that would require a long one. 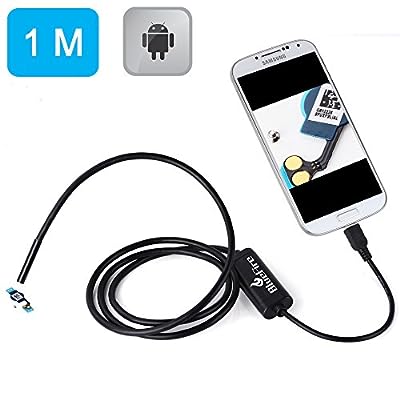 I use this with my One Plus One for running wires in walls (the 10 meter one). Pretty dope imo.

does it need an app to function or is it just, like, a webcam peripheral? looks way more cost effective than what I was budgeting for tbh.

It uses an app. I use CameraFi for android.

Bumping once to see If I can get more input. Thanks to everyone who contributed, I'll post when I decide/buy the thing.

The DS1052E/DS1102E were hugely popular a few years ago. They practically have been replaced by the DS1054Z because that model is better in almost every way. Both scopes enjoy their success because both can be "upgraded" (coughs) to their higher model ones. This made them popular because people would buy the 50MHz model and acquire the 100MHz via this "update".

Yep... I have that one and I used the keygen to activate the features and increase sample rate to 100mhz.

It's an awesome o-scope and has been indispensibly useful.

Rigol DS1054Z       Best Selling Oscilloscope Find out with the DS1054Z is one of the top selling oscilloscopes in the WORLD since its release in September 2014. Read the reviews! Let our customers te ...

I'd love to get one, but unfortunately it's just about exactly double my budget for it.

Well, you're going to have a tough time finding an oscilliscope for cheaper...

Than 400? there are rigols going for 200 RN that are firmware hackable, and all sorts of kits and tablet style ones, which I am not above using. (I'm fixing audio equipment, not reverse engineering embedded logic)

have you looked into this, for la savings?

might be worth a try, as my needs aren't very demanding, and I'm only out a small amount if the thing ends up being garbage.

#MakeAThreadAboutIt when you get/use it, even if it fails

looks like less work, who knows if its good or will work for what you want to do