What is every ones audio setup?

we see build logs of rigs and desk shots and what not but what are people using for audio?? post some pictures!!

Then for theater I use a Pioneer elite vsx-35tx with a Nuance spatial center, technics sb-t300 front and a31 rears with a Quest q12 400w sub. Speakers range from 20hz-70khz (leaf tweeters) and it can hit 115db in the room with music and no distortion.

My setup is fairly simple. Only thing different now is that I have the speakers running off a Lepai LP-2020A+ instead of the Marantz 2325 for fun. Doesn't sound as good, but DAMN, for $20 and being so small, this thing rocks! Speakers are Infinity P363's, and Sennheiser HD558 headphones. Running everything off the ASUS Essence STX soundcard.

Before we start this, let me just point out that I'm one ballin' bitch.  My audio setup just might be too much for you to handle.  You have been warned. 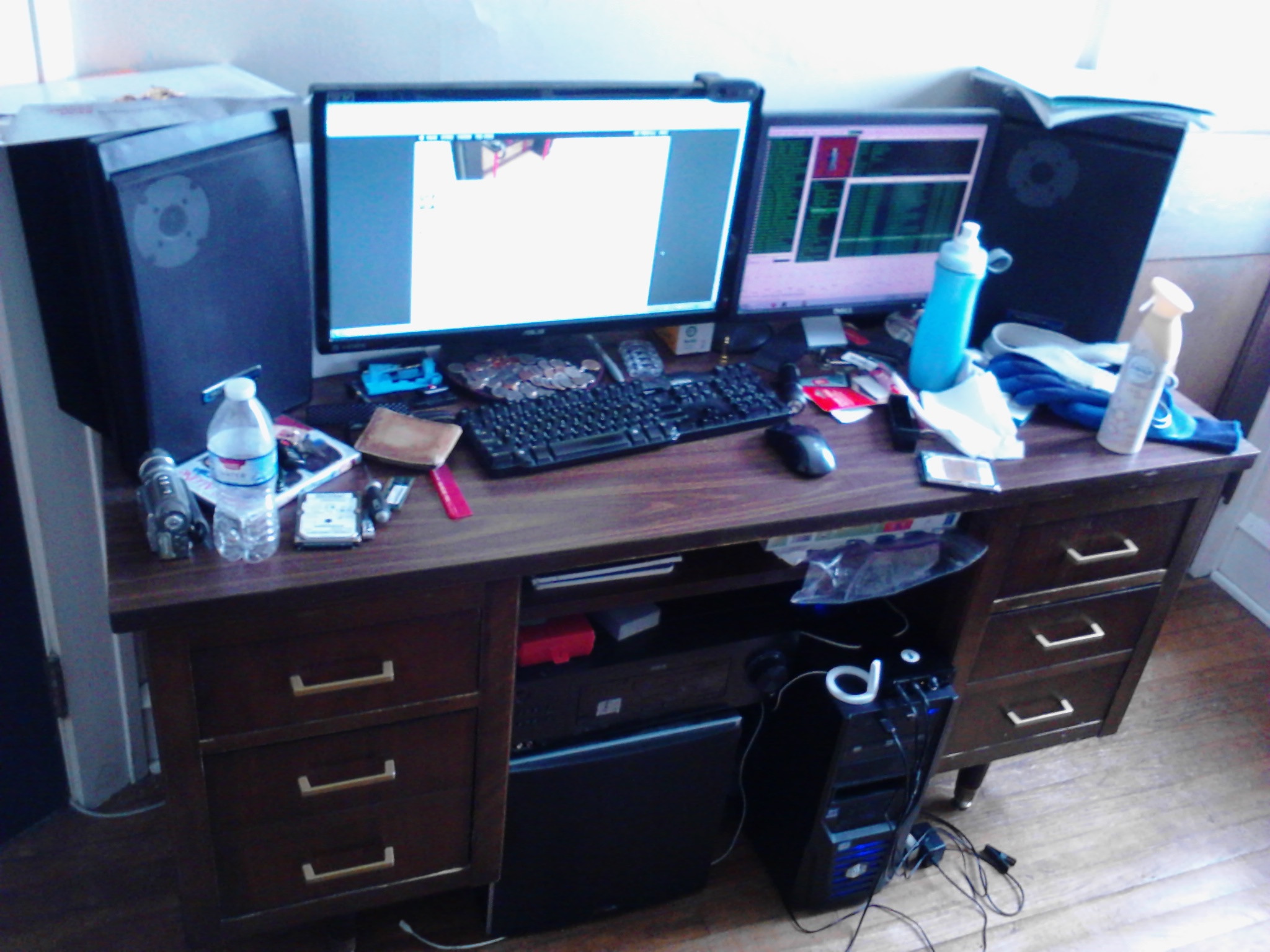 I'm such a baller.  As pictured, we have 2x Technical Pro Max-802 250W speakers and a Polk Audio PSW-10 10" 50W subwoofer all being driven by a shitty RCA home theater receiver that's probably more than a decade old.  That's being fed from my O2/ODAC combo with a Y-split cable from the output so I can plug in my Sony MDR-MA300 headphones without unplugging the receiver.

Fun fact about the receiver:  The amplifier circuit is very wonky, and if the source audio isn't fed at high enough voltage (like quieter portions of music/movies), the receiver won't output ANY signal to the speakers!  It's always fun having to crank up the volume all the way on the O2 (at low gain) to make sure I can maintain a consistent audio experience.

+10 internets to whoever can figure out what album I was listening to in foobar (right side monitor) when I took the picture.

PS:  Cable management is for the weak! 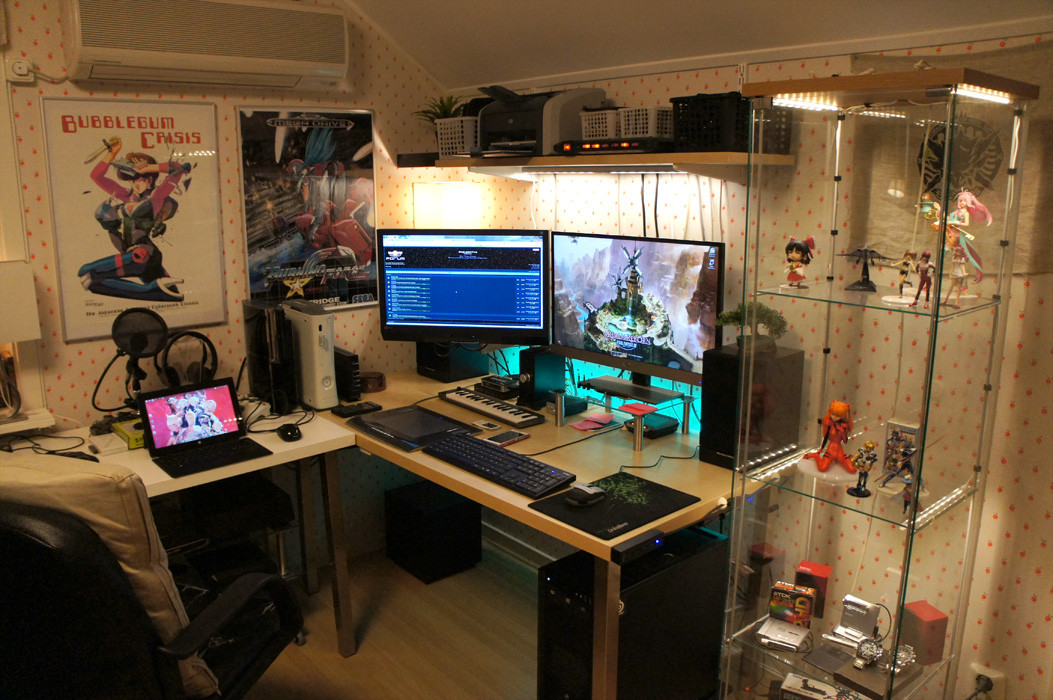 Mordaunt-Short 3.10 bookshelfs I picked up from eBay coupled with a cheap active sub from König - not very premium but it works well and doesn't have to fill a large room. The speakers are powered by an Audioengine N22 desktop amp, connected to a chinese DAC/headphone amp combo which in turn is connected to an active toslink switch that's hooked up to my PC, PS3 & XB360. Works pretty well for the price paid :) Go Go semi-cheap solutions!

I can promise you I wasn't the one who picked it and I would to switch to something calmer in a heartbeat, except that requires a lot of work I don't feel like doing. Like, ripping down shelves and moving all my stuff out of the room. I've lived with the lingonberry wallpaper for a long time and can probably survive for some time longer ( :

I have a peachtree audio decco65 that is an integrated amp/dac all in one. It powers headphones well, it's an awesome dac and powers my B&W cm5's with 65w of clean power. It's a wonderful setup for near field listening.

On a side note, I tried the mp3/flac challenge Logan put forth and I noticed a huge difference in most types of music. I listened to radiohead, death cab for cutie, mastodon, pink Floyd, skrillex, prodigy, and Orgff's Carmen burana.

The he difference was very noticeable except skrillex and prodigy Which makes sense. Pink Floyd and Radiohead was the most noticeable with the tonal quality and spaciousness seriously lost in the mp3 versions. With the rest it was as if parts were just missing. Like they remixed it and omitted stuff.

I also noticed a difference when doing 320kbps, FLAC/ALAC, and CD. For some reason, when ripping the FLAC/ALAC from the CD, it equalized the volume, while the CD had noticeably more volume to it. Going to 320kbps to FLAC/ALAC was actually less noticeable, though the difference was still apparent on things like Joe Bonamassa, Celtic Woman, and such.

Granted, that was using iTunes to rip it to ALAC, so it must have been doing something funny (also was running it on a Macbook Pro). Never figured that one out, don't have the Macbook, or a CD-ROM on my current PC to test it out again.

Is the Technics eq digital? Does it do all the channels on your amp?

Which JVC phones, if you don't mind me askin?

for $15-20 they work really good for how cheap they are, ugly as hell but I've went through a few pairs since I started using them back in like 2000ish. Actually, no. Your mind is one hell of a thing; even though the speakers are clearly more to the side then they are in front me me, the sound seems as though it is coming from directly behind the monitor. Positional audio is also amazing when in game as well, and I even get the effect that sounds are coming from behind me as much as in front.

Now if you are referring to the size of the speakers, then that is a whole other thing. They actually have a 4" midrange, and a 3/4" high. Compare that to the Audioengine A5's, which have a 5" midrange, and all the sudden it doesn't seem so crazy. The P363's then have 2 6.5" woofer for the bass, and thanks to the size of the speakers, it is delivered in a very clean manner, compared to the often over-the-top punchy sound of 1 10-12" subwoofer. This also has an interesting effect in that the bass is now also positional thanks to having true stereo, meaning positioning is even further emphasized; contrast this to a single large subwoofer that you have to worry about positioning correctly, finding a way to connect it, needing external power, and having a large box just sitting somewhere taking up space. Being passive, if I ever want to swap them out, it is easy, and the only part of my sound system that will change the sound is the speakers, as opposed to having monitors or comp speakers which may have different dacs/amps for each setup, along with trying to match subs.

If you mean as far as power requirements go, I can assure you that you do NOT need much power to drive them; 5-10 watts of power is PLENTY as proven with the Lepai LP-2020A+ sitting in front of me that never sees past 1/2 volume.

These were the last commercial speakers that I had, and they were amazing.

In case you are wondering, they are Magnepan mg-12's and the amplifier is Audio Analogue Puccini. This was a while ago as you can see from the TV and original xbox. I didn't even own a computer back then!

Since then I've been building my own speakers and amplifiers, a hobby which led to degree in acoustics and signal processing.

I'm not much of an artisan, but here's a picture of one more recent project close to finished,