Its been long time since i came to this forums <3

I got a question that came to my mind , what is the best FPS counter or lets say bare metal , without overheads or as early as possible in the pipeline

I got this picture from the net so i can understand how the order of things work : 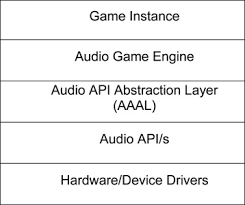 A -
So I heard that Fraps measure fps or show the fps on driver level
( dont know where i got that info from, something like after drivers finish)
But I dont think it is true , is it?

Anyway i heard it doesn’t work with dx12 stuff.
so not a great choice for me.

B -
then the most common I see these days is
Msi afterburner + Riva tuner combo.
so where does that sit in the pipeline ? is it after rendering complete before display ?

C -
Nvidia frame viewer
This picture confuses me it measures it 3 times
So first one ( T_Present) it is on api level ?
2nd time (T_Render) it is after Rendering complete so maybe same as [msi + riva] ?

**D - **
the ingame Fps counters work as built in the game game engine so maybe they are the earliest ? but maybe not always because some will have it work differently , will depends on the game engine right? 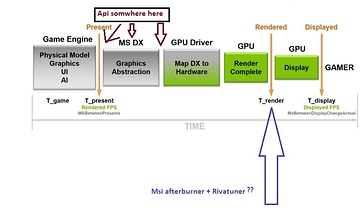 3rd time it is (T_Display) Same as displays built in overlay FPS counters?

sry for the bad English.