What is after Gasoline cars?

This post was created to move comments over from a previous thread to continue the discussion.

On your Tuesday episode you had a news regarding the Mazda engine. The technology that you showed is actually really cool. The difference between this and diesel and gasoline standard engines, or Otto cycle, Diesel cycle, miller cycle, and dual cycle is that the engine can harness the extra power left on the table that these for mentioned cycles are unable to use. The best way to help you understand the benefits is to show the limitations of each cycle. Otto Cycle has a hard limit of a certain compression threshold. This can be dynamic or static, but that is why there are Octane numbers in gasoline. The fuel will compression ignite and the flame fronts could collide and cause knock. Diesel and Dual cycles have a hard limitation of mix rates. The flame front propagates on the line where fuel and air are at perfect combustion balance. This means some fuel is not likely to burn, from lack of mix rate. The combustion is limited by mix. Miller cycle is an augmented Otto cycle that improves efficiency, but severely short changes the stroke length. HCCI is a premixed gasoline engine that allows for dynamic compression to be so high that the engine is in knocking territory, but switches from spark ignition to compression ignition allowing the power associated with Diesel engines, and the start up of Otto cycle engines. I would be more than happy to help further if you are interested in further understanding. I have over simplified this content, but the effect of the new engine is an increase of efficiency because the cycle is running thermodynamically more efficient with much greater difference in temperature and pressure. Also, for easy reading ( not technical information, one would need to visit scholar articles on the matter) https://en.wikipedia.org/wiki/Homogeneous_charge_compression_ignition

In some other thread there was a whole discussion as to why biofuels are not sustainable.

The problem with electric power is that it takes hours to charge, as opposed to 4 minutes to fill the tank in a gas powered car.

I wouldn’t have a problem with this because I go about 200 miles a week, but some people do 400 a day or more.

Of course, but most people commute well under 100 miles a day. If you’re doing a lot of miles, fine, but that’s going to be a rounding error compared to the vast majority of people better served by electric on a daily basis.

Nah man, electrics are getting more and more efficient too, and so is electric power generation; solar, wind, etc. We are approaching the last time in human history where energy will be a scarcity.

Until they get the energy density down to the level of petrol, it’s going to be tough. Taking theoretical 100% efficiency, the batteries add so much weight compared to petrol, reducing the efficiency of the system. Then you have the waist of energy when transferring energy and charging the batteries. The batteries themselves are not renewable and potentially contribute for to the carbon footprint than an old diesel (Or VW TDI)

Hydrogen is just a storage medium - like instead of batteries. The energy is produced/captured elsewhere. Hydrogen is probably a boondoggle, but who knows.

Hydrogen is a great storage medium for short term. We have an abundance of it, it doesn’t take 4 hours to refuel (Like batteries) and is safer than both Petrol and Electric. 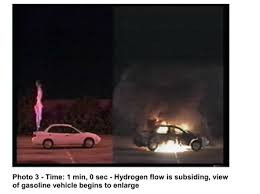 Reason why it’s safer than electric are down to the type of battery electric vehicles use. If a Lithium ion/polymer battery is punchered, you get this
http://images.dailytech.com/nimage/2013-Tesla-Model-S-fire-796x528.jpg

Don’t, Apex seals going is just a part of owning a a rotary. But the reason why Mazda went with softer seals compared to the unbreakable or harder seals is due to it costing a lot less to replace seals than it does replacing the housing after unbreakable seals use carbon buildup to gouge out the housing.

But don’t go LS. It’s been done already and it ruins the balance of the car. Great, you can go fast on a highway now but good luck going around a corner.

the batteries add so much weight compared to petrol

yeah, but thats improving. battery technology is way better than it was when I was a kid. NiCads are a thing of the past.

Then you have the waist of energy

is that a fat joke?

batteries themselves are not renewable

batteries can be recycled. and the technology is rapidly improving - full stack.

safer than both Petrol and Electric

But don’t go LS. It’s been done already and it ruins the balance of the car

The weight delta for a LS vs stock isn’t that much. like 50 lbs. LS motors are amazing. Sure it’s the polar opposite of a rotary, but fuck you get a mountain of torque and a shitload of power. Plus add a Tarbo and you are at Ludicrous speed. What little you give up you get back many times over.

But don’t go LS. It’s been done already and it ruins the balance of the car. Great, you can go fast on a highway now but good luck going around a corner.

Arrgh … don’t fall in that trap. Mine is rear biased with the LS1 swap to aid in traction. More economical and more reliable. Not standard though lots of lightening hence it’s 100kg less than the Tape-X it started as.

However an original RX7 is still a beautiful thing though with the caveat that the rotary needs proper maintenance. Mine was bought as a non-runner so I had no qualms about doing the swap.

Anyway back to the topic.

We still need interim technology until the infrastructure is in place to support the next gen of transport so hydrogen or electric etc.

So making the best of what we got is all about the HCCI and forced induction plus banning of heavy particulate polluting fuels such as diesel.

One of my fav vids of recent times is Koenigsegg describing the Freevalve actuation tech on a mundane engine production application and all the advantages it gives.

Electric vehicles are heavy and are not a solution to the energy problem.

Your not thinking far enough into the future. Electric vehicles are really good considering, they’ve only been properly (IMO) focused on since 2012. We have to start somewhere, and this is a really good start.

LS swap that RX7. LS swap the Miata. LS SWAP ALL THE THINGS!!!

This won’t happen if no one supports electric.

If a Lithium ion/polymer battery is punchered, you get this

I agree our battery technology is garbage, and we need to find something else to store power, but petrol isn’t exactly safe either.

Tesla split in half were the batteries are, and no fire. Not saying all will be this lucky, but gas is extremely combustible as well. IDK which ones safer, so I’m not going to “point the finger”. I just want to keep some perspective. 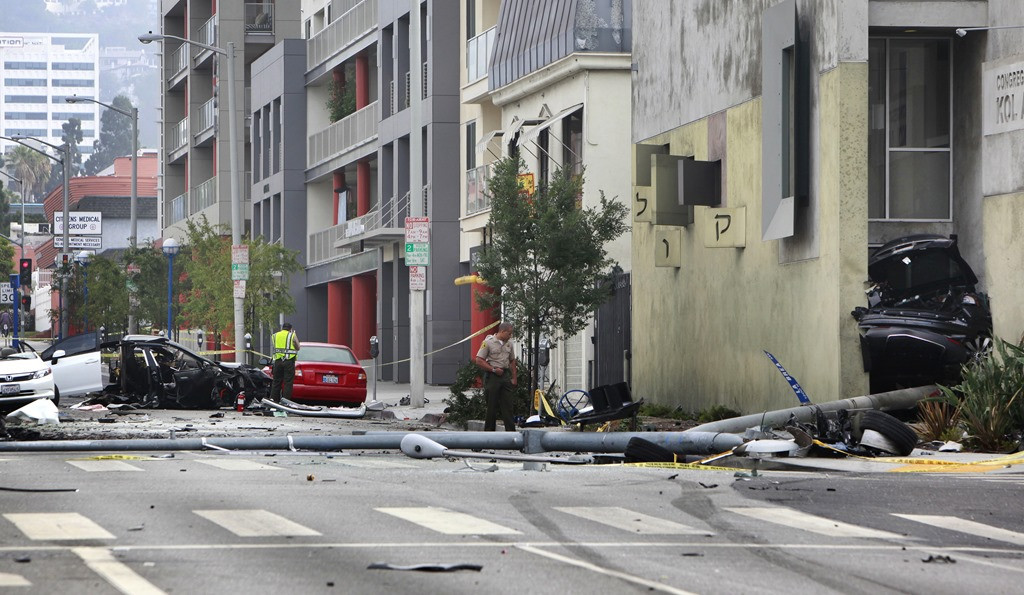 The weight delta for a LS vs stock isn’t that much. like 50 lbs.

Because when it comes down to it, rotary engines suck.

It’s not the most reliable (seems to last about 150K miles), but it’s still super cool IMO, and there pretty easy to rebuild. I wouldn’t daily one, but I would weekend warrior one.

Reliability is boring? Wrenching is more exciting than driving?

I agree our battery technology is garbage, and we need to find something else to store power, but petrol isn’t exactly safe either.

Tesla split in half were the batteries are, and no fire. Not saying all will be this lucky, but gas is extremely combustible as well. IDK which ones safer, so I’m not going to “point the finger”. I just want to keep some perspective.

There are cases where Electric cars have gone up in an unstoppable fire due to the batteries chemical reaction and there are cases where they have not. There are cases where petrol cars just spill fuel, there are cases where petrol cars spill fuel, that fuel ignites setting more cars on fire. The point I was making is in most cases, Hydrogen fuel either burns off rapidly with minimal damage, dissipates into the air with no fire or last, a rapid combustion of fuel which while dangerous, is very short lived. This is all only assuming hydrogen being stored in gas form, not in a hydrocarbon where it’s perfectly safe. Honda, Hyundai and Mazda have all proved this concept as a viable option IF we can redirect solar efforts into storing energy in potential chemical bonds by breaking water into hydrogen and oxygen and allowing for ease of access for the general public to top their cars up. 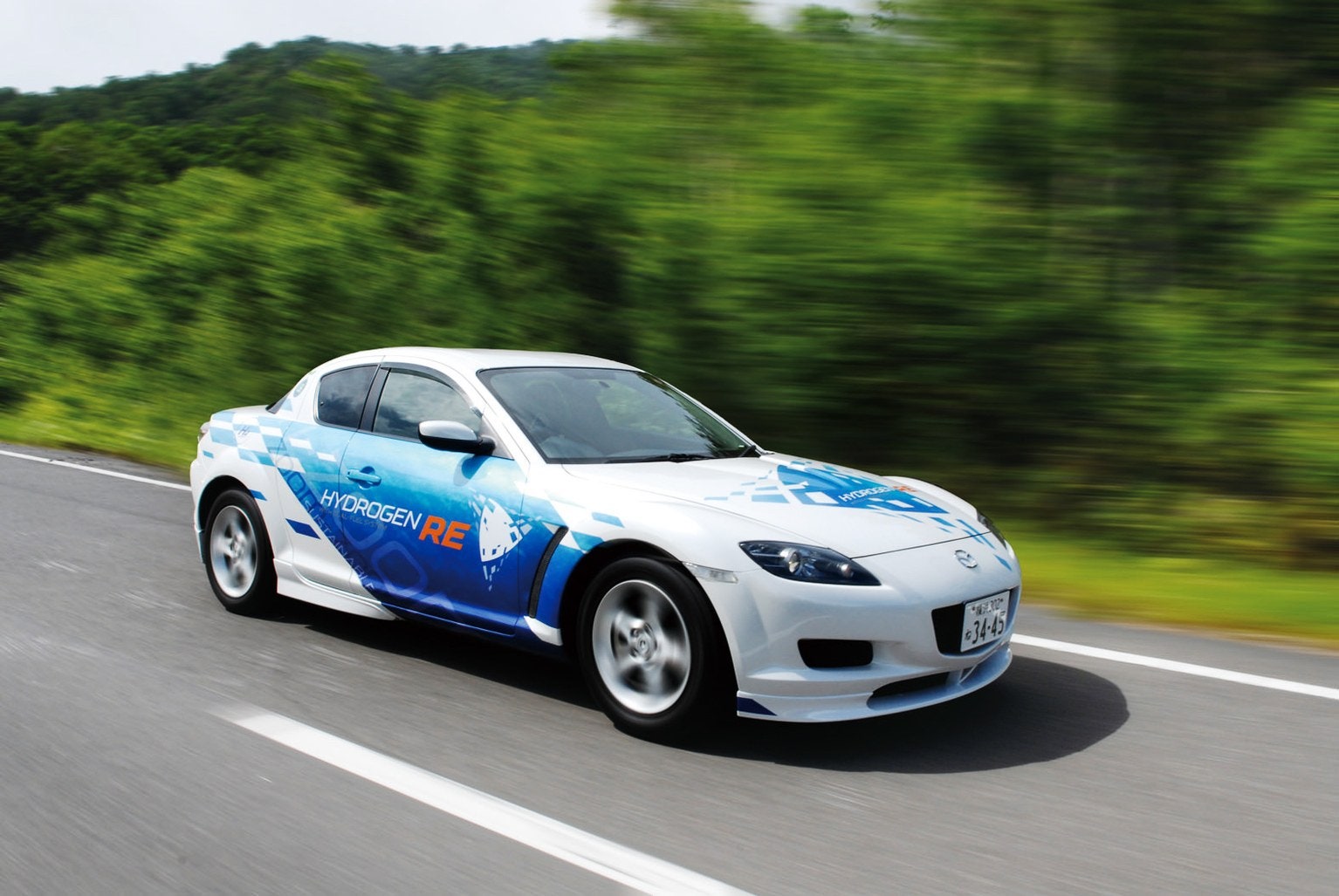 Add roughly 60lb to the 13B to include gearbox and an LS1 is still more than double in weight. People who say it’s very little difference have no clue what they’re talking about

Not if you use a super charger

The big problem with hydrogen, is the logistics of storage. Hydrogen will fit between molecules of steel, etc

The only thing I did with Hydrogen was a Hydrogen generator, but I can see this being a good source for storing energy. I might have to do some research on this subject.

Hydrogen will fit between molecules of steel, etc

Storing it as a gas is impractical and dangerous anyway, due to the high pressure end potential for explosions. I know there’s some sort of sponge-like material that can efficiently hold natural gas. Something similar is needed for efficient and safe hydrogen storage.

Agree, but I sure will miss shifting.

I’ll have to keep a manual weekend warrior.

Not any I know of. My Nissan Leaf definitely doesn’t shift, and I know non of Tesla’s cars do either.

Electric is the most logical future… Hands down.

Hydrogen had too many logistical issues, back in the early 2000s it caught in the media but never went anywhere because it was more dangerous to store/transport than your pinto… Literally a bomb on wheels. That and the logistics behind making it and transporting it are insane.

Electric cars are heavy so? They already achieve a better carbon footprint than light cars and battery tech is only going to get more efficient / lighter in the future.

Now electric cars are not for every driver… And they’re not perfect.

The issues of “oh I can’t fill up in 4 minutes” is irrelevant unless you drive more than your range in a single day. To drive an electric car all you need to do is charge it every night while you sleep.

In locations where electricity is $$$ or you drive allot then electric cars are not for you… At least until the infrastructure is there to support them.