What if a monitor had good speakers?

I had an idea that I decided to Photoshop a bit of Industrial Design.
I did this mostly as a design challenge to illustrate the concept, not that I want one.
While I am not happy with the appearance yet, it's an answer to a question no one is asking.
A soundbar with a USB hub in it + a sub would probably be better. 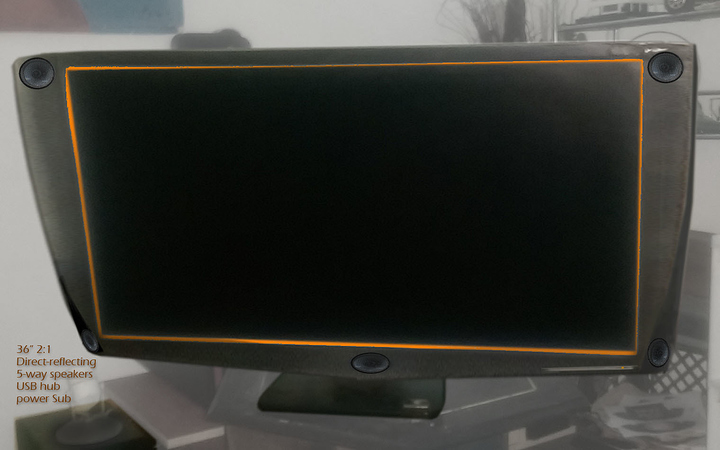 I was thinking 5.1 surround sound with USB 3.1 connections carrying all power, video, audio and data. The PC would connect to a powered sub-woofer that also provides monitor and audio amp power. The screen would have a USB sound card driving LF, LR, RF, RR and Center speakers and a USB hub. The rear speakers could be BOSE-like reflecting units, angled away [and un-delayed?] so the user ears hears surround sound in the echo.

Hopefully a single USB 3.1 cable could carry all that from the PC to the sub to the screen.
I don't know, waddya think of the product?
What do you think of my Pshop fakery?

as a project it seems like a neat idea, but eh.

Could always just go with a soundbar, it's better than nothing

@Streetguru I agree.
What got me started is my girlfriend is using her cheap 720p 32" TV doing double duty as a monitor.
The picture is OK but the sound is terrible and she has no room for good speakers.

I was looking into soundbars, but decided to get her a GPU and RAM upgrade for X-mas first.
This was merely a Pshop thought experiment.
Not all experiments are successful, but there is no such thing as a Bad experiment. ;)

A monitor with a soundbar would be better.
Cheaper, a more efficient use of space and it would look cleaner.
I'm sure I can find one on Google.

Imagine if the bar was integrated into the bezel. 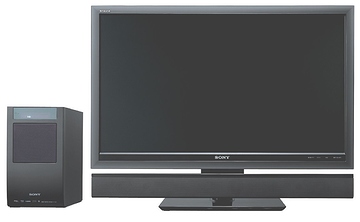 What you can do, is build a small line array out of a single bar that stands upright. This way, it can be beside or behind the desk without taking up too much room. drivers should be no more than 3" a piece.

5.1 wouldn't really work coming from a single source (i.e right in front of you) also for them to be decent the monitor would be frickin huge and it would also compromise the design of the monitor

I am no expert, but I have a pair of BOSE speakers that use their Direct-Reflecting patent.
I thought by angling the lower pair of rear speakers, the sound could reflect off of walls and imaging might "appear" to be coming from behind the listener.

True, I am sure there are ways of simulating such things, but you wouldn't ever get a true to life surround experience, just like you wont even with multi driver headphones as the source does literally need to be coming from a variety of distances and positions, however it depends what your expectations are I guess, If the question is could you make a monitor with better sound quality? then yes! :) but I think to make it decent I would personally want it to be an attachment like dell does that sound bar that attaches to the "chin" of its monitors.

Otherwise you are spending a lot of money on a single monitor that if one single part goes wrong you lose both aspects, making upgrade paths etc harder too.

@Cerimania I agree 100%. I did this mostly as an Industrial Design challenge, not that I want one.
That said... If a company were to make it, they might find a few buyers.

Oh yeah you can always find a market for these kind of audio products!

Sounds to me like something that Apple would do considering that they own Beats now. Mac Cinema, now with Beats audio. Only $2000. Of course it is a panel available in off brand monitors for $200 and speakers available for <$100. But it would sell like hotcakes. Personally, in my mind, monitors are just displays. Putting speakers or tv tuners or anything else in them would add cost that I don't need. If you want good speakers, you can get speakers. I am sure tha tsome people would be interested, but I don't think that most desktop users would bother with it.