What Does Free Speech Mean (to you?)

I'm interested to know what peoples definitions, reasoning's, and thoughts are on what free speech means to you?

It would be great to know how you perceive it, how you came about your meaning of the concept, if anything influenced how your view free speech and if its changed over time, its importance or lack of, for example.

It's a bit late so I plan to try and formulate my definition and reasoning tomorrow when i'm more clear minded.

Freedom to express whatever you want.

The same way I view any freedom or right. The ability to express yourself without consequence.

My only only requirement is you don't limit anyone else's freedom. You're welcome to say whatever you want as long as I'm free to reciprocate the argument.

That said I feel there is much work to be done encouraging people to be more decent.

The freedom to shitpost

you don't limit anyone else's freedom

Can one limit someone else's freedom with just expressions?

I mean with respect to the platform. For instance the great state of Canadia recently passed legislation requiring people to use nonsense gender identities, otherwise you may be prosecuted.

I'm not promoting hate speech, but forcing people to conform or limiting their ability to express their thoughts is not freedom. In that case all speech must be allowed.

i think to express oneself without fear of being prosecuted, or censored.

"Freedom of speech is the right to articulate one's opinions and ideas without fear of government retaliation or censorship, or societal sanction." - Wikipedia

I think it's such a broad definition that it's just not possible for it to exist entirely and everywhere.

There are many other definitions that I've seen, but they're all pretty similar.

@SudoSaibot I see what you mean now.

What a weird addition to the definition. I read "societal sanction" as other people shunning the expressed. I suppose laws are societal sanctions as the individuals in said society are the ones who are putting laws in place. At least in a republic or democracy.

Another thing that seems odd about the definition is that a freedom of speech is the right of an individual to express oneself. If everyone has this right then it's inherently someone else's right to change what you say or, in other words, to censor them.

I feel the wikipedia definition is overbearing. This is how I would change it:

"Freedom of speech is the right to articulate one's opinions and ideas without fear of government retaliation."

I suppose laws are societal sanctions as the individuals in said society are the ones who are putting laws in place. At least in a republic or democracy.

I agree with this. It's not direct societal sanction, but ultimately the people are the ones who decide what is acceptable and what is not.

I also think this plays along with the same idea: http://www.pbs.org/wgbh/cultureshock/whodecides/firstamendment.html

Fundementally I believe free speech is the right to say whatever you want, privately or publicly, without fear of government censorship or retaliation. Although not speech per se, I would extend this same right to the arts.

All the recent problems with bias and censorship in the news and social media made me question whether this should extend to privately held organizations, but in the end I really can't think of a way to make that work. I feel like any law made to prevent censoring on Twitter could be abused to prevent a restaurant from ejecting an unreasonably rude customer. It would be nice if these platforms could be held to a higher standard than they currently are though.

I think an interesting question, if it won't derail the thread to badly, is what restrictions on free speech are reasonable or acceptable? Incitement to violence is an obvious one I hope. I'm also in favor of defamation/libel laws, but there's the possibility that I haven't thought that all the way through. It does seem to me that if you're going to make statements about someone, you should at least have facts to back them up.

True freedom is a basin that carries many things. Within the confines of frequencies we define as freedom, is a moral compass, which lives in harmony with freedom. That being said, once one is living true freedom, in peace with all those things within its harmonisation, it would be then proper to say freedom of speech is saying as you feel. Until then freedom of speech is just another warzone.

Free speech to me represents both spoken words and physical expression. (for example a flag, art etc) the part where I draw the line on free speech is where it could cause physical harm. For example threatening to kill someone and starting a trash can fire in front of their house is a bit of an issue. It's just asking for trouble.

I like to approach life with a live and let live attitude. It's the only way anyone is going to get to be who they want to be or say what they want to say.

Can one limit someone else's freedom with just expressions?

It's two parts like @SoulFallen said, speech and physical expression are heavily related.

It would be great to know how you perceive it,

Say or express your self in a way that does not endanger or infringe upon the freedoms of others. This doesn't mean that if you say something and someone takes offense to it that you cant say the thing anymore, it does not infringe upon their freedoms. Expressing or acting on the things you say is different.

This is not how it's supposed to be. 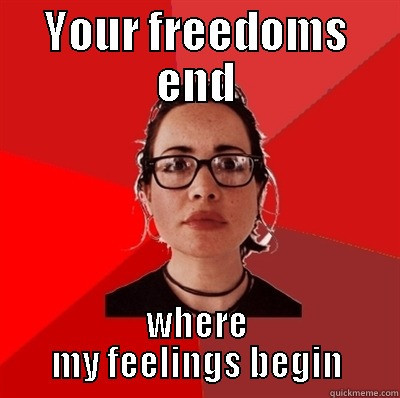 My only only requirement is you don't limit anyone else's freedom

seconding this, a persons freedom ends when it infringes that of another

"Freedom of speech is the right to articulate one's opinions and ideas without fear of government retaliation or censorship, or societal sanction." - Wikipedia

important word there, it means that you can say just about anything and be fine from the government. However this does not protect you from being fired by your employer for being an ass on twitter (or anywhere else).

The freedom to express whatever you want with the explicit privilege of yourself also being accountable and responsible for any consequences or actions henceforth committed after any vocal transgression. The freedom however shall not be granted to take one others freedom away. This applies to all entities which includes but is not limited to companies and individuals as well as groups.

I have a more utilitarian version. Free speech to me is a system that has counter measures that are against free speech that equal or are greater than the force to submit opinions. A business that operates and suppresses public thought or expression has a back lash such as that business losing customers and or going out of business. This systems operates not in a 'overhead' way with a government enforcing this but rather the culture itself supports it.

This is different from the free speech of the constitution which is the counter to the implicit authoritarian nature of a government.

I'm in the UK so maybe my opinion comes from a different place.

Our constitution is a little more complex as it has evolved over a great deal of time in stages. We do not have a single document or group of documents to look at.

I'm in no way an expert in my own constitution (very few are) it's not a hot topic as it is in the US.

So yes I have the freedom to speak my mind to whoever is willing to listen without fear from government interference. However there are reasonable restrictions to curb the nutters.

One thing that has tripped up a few over here is things like Twitter. In their heads they think they are speaking in a private way but in reality they are publishing and can be chased through the courts for libel. Or by the police for hate speech. People need to remember that what you say on Twitter, facebook and the internet in general is publishing. As a private person you are not covered by press freedoms laws.

To me freedom of speech is to be able to say anything out in public or on internet without having other people shit on me or going to prison. Of course no matter what your opinion is you will never get everyone to agree with you, so why bother pretending to be someone else.

I hate black people. They are just apes that don't know how to behave.

I hate arabs and their stupid ideology. Always demanding things to be done their way wherever they go. Everything that is not from their culture is offensive to them. You better smash your head against the floor every day if you don't want to burn in hell. Allah is great and forgiving.

All religions are pure cancer. Used mostly for brainwashing and manipulating the masses. Oh the other day I stole a car, killed a dog, raped a woman and ate food that belong to homeless man. Then I asked for forgiveness and because my heart was pure I was purged of all my sins.

Kim Jong Un is a glorious leader who loves his people and does everything in his power for the prosperity of his country. All the bad things you hear about North Korea are just western propaganda.

Being a gay is wrong because you can't reproduce with another man.

All people with genetic diseases should be banned from reproducing. It's not like human race is about to go extinct.

When Theresa May sees the level of censorship and control in chinese internet, she has such a big orgasm that her love juices flood all the ground chambers of parliament.

The primary goal of every human female is to look as attractive as possible in order to snatch a rich male and produce an offspring which will make the her life easier while making sure the said male does not run away.

The primary goal of every human male is to shag as many females as possible by any means necessary.

USA, Russia and China should go all out against each other in Nuclear War so that the rest of us can live without being bullied.

I could go on for longer but I'm getting tired now. I don't believe saying ugly things should be punishable because you can't physically hurt someone or destroy something tangible just by talking. Now if you start burning people's houses that's completely different scenario. That would be a freedom of action which in turn would create anarchism.

Drama queen... But that's okay you're exercising your freedom of speech.