What could I do to optimise this system?

Hello, my PC is too loud, and I want this to change. But how would I go about this in the best possible way?

I was thinking about getting a bigger CPU air cooler such is this so the fan could spin slower at higher load, as-well as of-course, a quieter case, such as this, which I would add around 2 large, quiet fans to, in addition to the fans that come pre-installed. And, an SSD, just to speed things up.

However, I was wondering what the most optimal way to set things up would be. I will have 1 140mm fan at the top of the case, but in which slot would I fit it for the best airflow? And, would fitting another 140mm fan to the side panel be much better for the airflow? Or, would it instead reduce airflow due to to many intakes and just 1 small exhaust, which would increase the amount of dust that would set inside the case. I would greatly appreciate any tips and advice.

And where exactly is the noise coming from?

Anything better than stock cooler will help to reduce noise.

Why do you fight the physics? The warm air raises, and you push it back...
Turn this fan as exhaust, and get one more intake, filtered of course.
The silent case will block some noise, but i am not a big fan. At the moment you remove one of the top panels to install a fan, the noise is back. So yeah...

The video has another point but will do the job aswell.
Convection is one of the slowest effects occuring in nature, the air will be moved out of the system before even having the chance of raising.
I would discuss it but there is really no point in doing so as this setup works great since it exists in this form. I include a drawing so you can take a look for yourself. 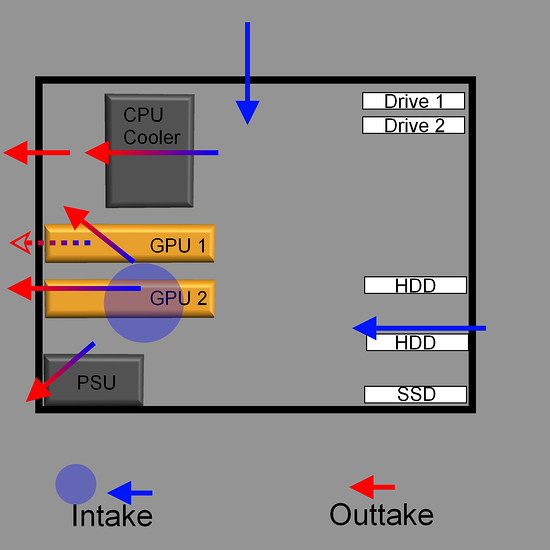 So you wouldn't change the top fan to become an exhaust like psycho_666 said? You would have 4 intake fans and 1 exhaust?

Sorry to say that, but I have no idea what you try to tell me.

Basically, the balanced airflow will give you the best thermal results.
Having a lot of intakes and a few exhaust will only protect you from fast dust collection.
But you can make positive air pressure in the case with 3 intakes and two exhausts, which will also gibe you better thermals than 4 intakes and one exhaust, simply because there will be more fans, taking the warm air out.
Have 2 intakes in the front, one on the side, and the back exhaust and one top exhaust. Just move it at the back, just over the back exhaust. The two exhausts will basically suck all the warm air from the GPUs and the CPU out, and the 3 intakes will always give fresh cold air.
The thermals of my system get 2-3C lower when i added an extra 120 exhaust. I had 3 intakes and one exhaust, and now there are 3 in, 2 out.
Balance your airflow for best thermal results.

What case do you have? How loud is it?

Get a good CPU cooler would be a wise investment assuming your mobo will let you clock your CPU. Like an H100i or similar. Would make a big difference. Should fit in the top ok, then you just want balanced air in and out wherever else you can fit fans.

Assuming you mean me: I use a Thermaltake Commander MS-1 as I hadn´t the time to move to the new case (Thermaltake Lvl-10 GT). Whispering would be what I call that.

There are just so many variables involved.

I have a Hyper 212 in my system (http://thegametechnician.com/forum/showthread.php?tid=29) it runs at about 600rpm in an ambient temp of 24 with CPU at 37. Is pretty much silent at those speeds. But I don't have a K series CPU, just a 4430 so not overclocked at all. If you're not going to overclock much you can probably cope with an air cooler. But as you have a K series I'm presuming you will so water really required then.

Depending on your ambient temps, clock level and load, you may well only need similar fan speeds (600-800). In which case noise will be low, but is so hard to say exactly without such specific data and at the end of the day experimenting is only way to be 100% certain. High loads on your CPU are less likely than high loads on your GPU, if you pull the heat away from the CPU to a water rad and fans that should then help to drop the case temp significantly. Which will in turn help your 290X have cooler air going on to it, which you can then maintain with case fans.

Can't look at case fans right now as can't get in to Overclockers, but if PWM then you can profile to only spin up when gaming at least.

Sorry I can't give more specific answers but I hope that's of some help.

I probably won't OC my CPU, so I don't think I need water cooling yet. However, would you recommend having 4 intake fans and 1 exhaust? Or 3 intake fans and 2 exhausts? As previously discussed.

I would get another case to be honest. HAF cases are well and good for what they are: Airflow optimised. At the moment a noise-optimised case will have the biggest return on investment for you.

I would try a custom fan curve for your GPU (in MSI Afterburner). There are often some points where the noise will increase disproportionally (the difference between 45 and 48% is night and day with my GPU for example)
I would probably go with plateaus, since fans ramping up and down is just annoying and a steady hum is way easier to tune out.

Since wind-noise depends on turbulence a PWM fan-controller would be nice. A fan behind the HDD cage will be noisier than a fan that is not very much restricted at all.

After I replaced my AMD stock fan with a Noctua NH-U14S and my system was quieter but the GPU was now audible.

Yeah, I'm going to buy a Fractal Design R5 to replace the HAF-X. And, do I have to buy a PMW fan-controller or can I just control the speeds of the fans via some program? Also, I think I'll remove basically all of the HDD cages as I only have 1 SSD and 1 HDD (SSD can go behind motherboard).

You want as even a balance as possible, so 3 in 2 out. Remember the fan on the PSU so that acts as an out too. I have two 12cm in at the top of mine, one out on the bottom, the PSU acts as a second. Then the PWM 12cm kicks in behind the CPU if required for extra out.

More in than out you will accumulate dust on components as it can't be pulled out, more attempted out than in will result in fans spinning faster than they need to as they can't pull cool air in.

That will depend on venting in the case too of course.

If you're not overclocking air is fine, the Coolermaster units are excellent. Not to mention damn good value, the only concern I would have is making sure in that situation you can vent the air from the cooler straight out. If it is dispersed into the case your GPU will have warmer air on it which you need to avoid.

If you saw the pic of mine on the GameTechnician site you'll see how I stuck the PWM right behind the CPU. The GPU has 2 fans blowing right on it so can be clocked a bit and yet hardly need to spin up. The inverted layout was a fine idea by Bitfenix.

To summarise, balance the air, get the CPU air out ASAP and focus air to and from your 290X as best you can. You should then find it a lot quieter as your airflow will improve. If need be get some joss sticks to see where the air is flowing.

I thought more dust collected if you have more outs than in due to air being taken in from places which aren't filtered. Just like this video says.

I didn't see your pic, if you could link it that would be cool.

How would you recommend me get the CPU air out ASAP?

How would you recommend me get the CPU air out ASAP?