What can I do with this old netbook do you think?

I’m just curious if anyone has any ideas how I can re-use this? It’s something I bought brand new in 2010’ish, shortly after a motorcyle accident - a normal laptop was too heavy to place on my broken bones, but I needed something I could use during the 18 months it took to recover.

Anywho, when it did have Windows 7 on it, it worked well enough. I tried Windows 10 and it wasn’t a good experience, even after applying Win10Debloater

I tried FreeBSD for fun, no joy there. I tried PopOS, and again no joy.

To me it simply seems underpowered for most tasks, but I wonder if there’s something I could do it as it still has plenty of life in it. I upgraded the RAM to a whole 2GB and swapped out the spinning rust for an SSD.

Look forward to any comments! 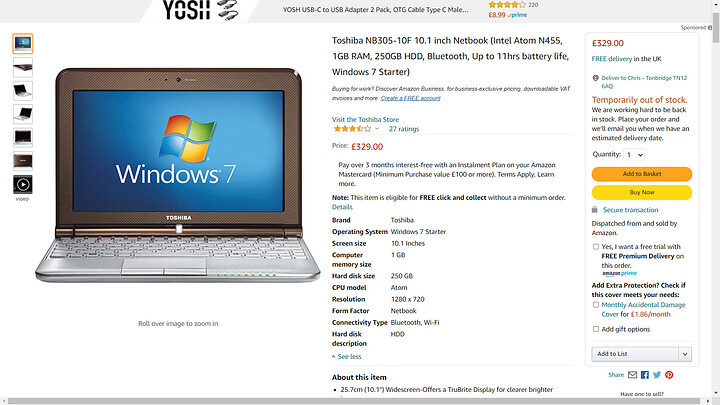 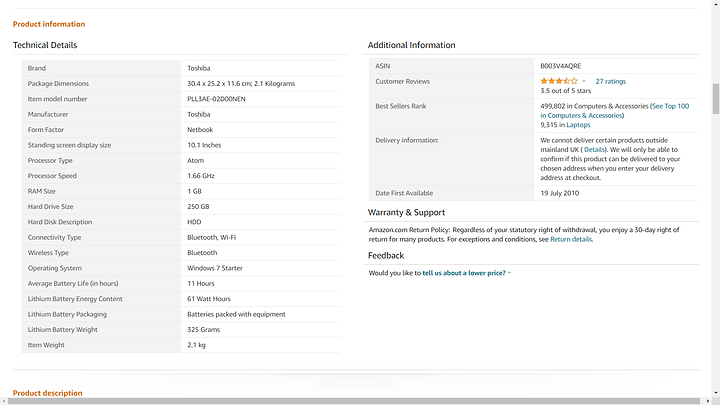 Maybe a fedora Spin, or Ubuntu light version? Both I know have desktop environments that are very resource light on requirements. I have only used the light fedora version on a old Samsung AIO pc my wife used to use because windows 10 made it freeze… I did end up upgrading the ram to 8GB though. YMMV but it’s a thought.

Cheers for that @HaaStyleCat , I’ll check those two out. Any ideas which I should try first, I’ve got Ubuntu experience, but none with Fedora.

Ubuntu Flavors is what you should check out if your familiar.
These are the ones I saw here:

MATE I think is a very light version but I’d have to look at all the requirements.

They have a little more info in the descriptions. LXDE version might be best for your needs.

I don’t have a ton of experience with these, but I hope it helps.

Depending on what you want to use it for you could just try to install Arch and use it for SSHing into a server? You could also utilize it for learning more about the Linux terminal. Just some quick ideas that do not need beefy processors or any rendering of graphical environments!

I would probably use it as a thin client I can lug around. I have a similarly specced Lenovo tablet I use for car OBD stuff (VCDS primarily).

There are a couple of linux distros for shitty (or vintage) computers.

There’s an unofficial SP4 out there which you can slipstream on your own copy of it. I have an old Intel Core 2 macbook running it for old games and it works like a charm.

Thrifty resource interfaces would be a must, trying to work along side that Atom chip
LXDE / MATE / Cinnamon being your best bets

Mints LTS variant [Mint 20] is listed for support thru '2025
https://www.linuxmint.com/rel_ulyana_mate_whatsnew.php

I Second trying out Haiku, at least putting it on a live USB and playing around for a bit, pretty lightweight and a good bit of fun.

I would also have a look at Alpine Linux and Void Linux, I’ve run both on systems with far lower specs than that machine and had a pretty good time.

any puppy version,
mx linux runs ok on it I have the same model i use for live recording the minutes of the fire dept meetings for transcribing

I have a netbook like that(eeepc X101H) running Debian 10, and the Mate desktop. runs just fine.
For extra lightness, use lxde/just openbox and make sure you’re only installing required packages(--no-install-recommends also DON’T install a desktop from the installer).
For extremely light desktop tasks, using something like buildroot might be fun and yield a usable system.
For extra performance, you can compile your own kernel with fewer features(and all CPU features properly supported), and use a x32 userland. But that’s honestly usually not worth the hassle.
You can also use gentoo to have your userland custom-built for the CPU architecture. Support for old hardware is surprisingly good. You probably need distcc. I run a setup on an old thinkpad like that, it has a PIIIM(No Desktop Envirioment, just openbox) - but your netbook is “current” enough not to justify that

On the usefulness of these devices:
They should be perfectly usable for most desktop tasks, except web browsing/multimedia/gaming.
If you’re fine with the form factor, they’re fine for programming, administering other Linux machines, text processing, etc. - as long as you avoid electron “apps”.

You can get a little more creative if you don’t plan on using these devices the “normal way”:

You can setup it up as a portable VNC screen.

Pulseaudio has networking support, so just hook it up to a speaker and you’ve got a “smart speaker” for video conferences that can also just stream your Linux desktop audio and probably has a built-in webcam and can stream video too.

Hook up some USB hard disks, and use it as a remote backup for unimportant stuff(keep in mind the USB controllers might be kinda slow, and the ethernet chip might also be on the same controller).

Add a USB network card and use it as a firewall/caching proxy/ad filter ala PiHole.

Use it as a simple hotspot, or the reverse, a wireless-to-ethernet bridge.

Set it up as a fallback router with some LTE USB stick.

Set it up for “digital signage” if you can attach a second monitor.

Play with containers, LXC and docker should run fine.

Set it up for retro gaming station with a controller and a collection of ROMs(that you legally own, of course…)

Run android-x86 on it to use android apps.

The possibilities are truly endless. After all, It’s just a spare, regular, portable, battery-powered Linux computer.

It should still have comparable/more power than a rPi.
And software support should be even better, because it’s x86.

If Ubuntu/Fedora etc run too slow, I would recommend Debian lxde or a BSD.

Spiffy dosbox emulator for the plethora of amazing freeware and abandonware titles available. Just add on one of those super small format 128 gb or 256 gb usb drives and a solar charger and you’ve got yourself an amazing source of entertainment for the apocalypse.

You can also use it as a dedicated MIDI emulator and play your DOS games with MT32 emulation: Ultimate MIDI Emulator Project \ VOGONS

@ChrisA Let us know what you find that works or doesn’t for ya.

Pi hole, hook up an external ssd do freenas etc. I’d do that with it.

It’s weird that raspberry pi zero apparently scores more geekbench points than n455 atom (hard to search for this stuff, not sure which versions etc).

Maybe as a server for home assistant - if you’re into that stuff / not sure if there’s enough ram for a modern browser+anything else useful on there.

…or as some other low performance server (airsonic/funkwhale music server, or pi-hole machine or similar)

Hi all, very quick sorry for delay, I can see some wonderful ideas. I’ve been doing a lot of building/manual work over the last few days so I’m knackered, but I will reply properly ASAP!

Maybe as a server for home assistant

Why waste the battery/screen/integrated keyboard on a shove it in the corner home assistant server?

And on that note… does the battery still hold a decent charge on it? Because that changes it’s available functionality quite a bit

The battery is kind of like a UPS - if it works it’s a good thing for your monitoring/automation/data logging/security [if one dares] system - even if not portable.

Screen isn’t very good - but ok in a pinch, keyboard as well.

I would keep windows 7 on it and load it up with emulators, they actually perform a bit worse on batocera and lakka
A since the linux emulators typically aren’t as mature, you can probably get away with n64 and ps1 emulation and bellow