Wendell, what the hell is going on on your monitor?

I am watching the new videos, amazed by Wendell's face (OH MY GOD YOU'RE BEAUTIFUL) and I see on the edge of my TV your monitors are flipping shit and it looks like IRC crossed the streams.

What the hell are you looking at Wendell?

It's the coding needed for the real time translation matriz he uses to communicate his knowledge to us in plain english.

@CyklonDX, I'm decripting the username you hid behind those red lines.
I made a program to in python to.
It's so powerful I think I'll have to burn my hard drive tonight because if anyone gets it they could take over the world.
Here's photo evidence.
Look at how many numbers there are. 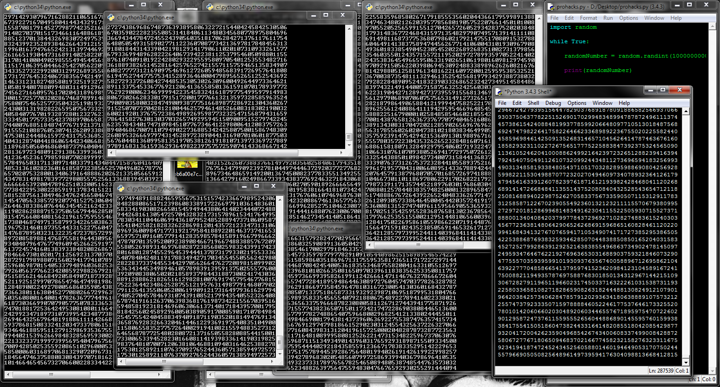 still to crack them you'd need user name (which i hid behind red lines) and SID which is not shown completely.

With the way you crossed that out, more than some common sense really isn't required.

Also, that screen is running nethack. I'm assuming it's either someone streaming nethack or some software automatically playing nethack.

This reminds me of the time airport security held me for "questioning" because my laptop boots into cli. L33t haX0rz 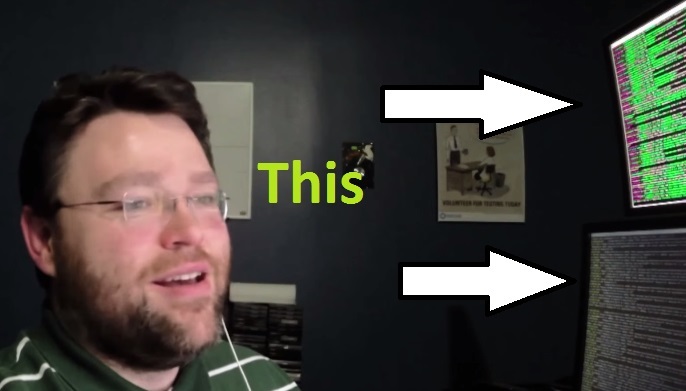 That looks a whole lot like IRC clients, yes.

On one of his videos I'm certain he had dwarf fortress in the background. As for the scrolling green text it seemed aufly fast for IRC I thought it was something else.

I have seen that monitor playing some platformer game before, so I wouldn't be surprised if he just has it running through games for whatever reason. Maybe he is testing his AI's ability to reason via logic and timing puzzles in games.

I can't remember which episode of the TEK it was but it looked like he was playing a MUD with an automated movement script and/or text triggers. Otherwise he's usually got what seems to be IRC open... but you know what now that i think about it, it could be the chat from the MUD client as well lol..

Wendell where you at man? Please inform the public! If i'm right about the MUD.. it would be awesome to do some runs with the legend!