So here we are, months since I bought the 3990x for super cheap and I’ve been buying all the parts since!

What I have collected:

At this point I am waiting on the NVIDIA 30xx series updates and releases to finish this build.

Just a quick recap! I was not trying to buy the 3990x at all but it went for the price of a 3970 soo, it is what it is! any tips or tricks anyone has is always appreciated. Not really enough videos online about the 3990x

what am I using this build for? I need a rendering machine for faster rendering times on my large 3d print files I have. I use a laptop and sometimes renders can be 6+ hours not counting corrections and re-renders… I use the Makerbot Z-18 so anything larger than 25.4 cms isnt worth the time.

But since I will have the extra power I haven’t ever had before, I want to do more things! so any thoughts would be great.

Personally I have been debating if I should even have the 115i and if I should just trade it in for a heatsink instead. I wasn’t planning on watercooling the GPU(s) either. I wasn’t thinking about overclocking per say but perhaps “fine tuning” it. I’ve been hearing and reading about the new WST app that might help with just that…

Software wise I was thinking about making this PC into a virtual machine. Linux / Blender but then also a windows pro /workstation OS for other things like streaming / video editing for the things I print / other hobbies.

So yeah! this year has been crazy but that is the update.

What sort of videos were you looking for on the 3990?

The Legend himself!! wow… well here is a video of the 3990x when I got it lol

But really the only “in depth” videos I find is from your channel. But mostly more Hardware related. You do talk about some software but I know those videos could be hours longer. Maybe a video on the best way to split the processor up or about different types of ways to utilize the processor? Has Windows gotten better with the processor since the launch? should I even run windows on this machine if it doesn’t use the threads and thinks the machine just has 2 32cores in it? What type of common errors might I be getting when I do a fresh install?

Anything like that really! and thanks for the reply

My comment is that you have a lot of SSD storage. Which is good! But the WD Black seems out of place. I’d go for a slower 8 TB drive for bulk and backups.

Oh also if you build systems do you have just any old PCIe GPU laying around? I’d get my build running even if it was just a RX460 or Nvidia 750.

Okay I will take it to a friends house to test everything @GigaBusterEXE though I did get the extended warranty on everything that needs it and I still want to do a full unboxing video etc. I will eventually get more storage @zlynx but figured I had a good start for a personal mini server-like desktop lol I have about 4tbs worth of data file things currently

Also, does it matter that I didn’t get the NEO series of ram? I got the RGB kit… says that it works for both. I didn’t really think about it until I seen your one video about it @wendell 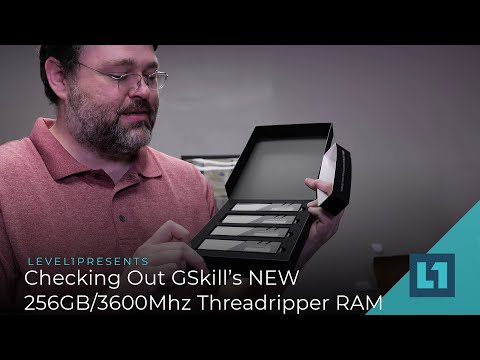 It’ll be interesting to see if you can actually get that kit to run @ 3600 (or at all). I had trouble getting the non-Neo kit running that I borrow from a friend before I got a deal on the Neo kit.

[0G1A8592-Edit] Swapped out the 128GB kit for a 256GB kit. It was $400 off because someone returned it for nothing being compatible with their system.

Mine board isn’t an Alpha though, so that may be a difference maker.

@Den-Fi honestly if they don’t work that is just weird! They are the same frequency and everything… nothing other than the description actually says that they work specifically for the AMD processors… The other kits released April 15th and the AMD kit released April 16th says Newegg but that they both work for both chipsets. If I didn’t watch @wendell 's video about it I would’ve had no idea. I understand that the only recommended speeds are 3200 for only 4 channels but still. I’ll let you guys know when I know.

Edit Also AMD specifically says that the GSkill ram is thee ram to get for the Threadripper processors. It doesnt say that there is a specific version of gskill, and I wanted the all black with RGB version lol so yeah I’ll be shocked if they don’t work. I figure I’ll need to play with it a little.

When I say “work” I mean work with some sense of stability. I went all the way down to 2666 and was still not passing mem tests. Things like die types and manufacturers change from kit to kit, so they are definitely not created equal. That said, I do wish you the best of luck!