First let me say sorry if this doesn't go here if someone would like to move to the correct place that would be great i have no idea what this should be under. So i got this webcam with a built in mic, The mic isn't working its Plug and play so their is no drives to use the webcam it self works, just the built in mic doesn't work. the webcam is the HAVIT HV-N5086.Ill post a picture that is shows the mic is detected and set as the default device. 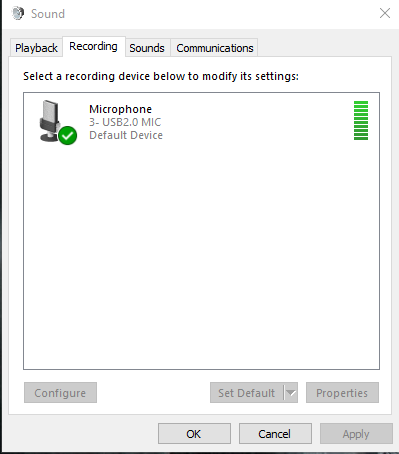 Do you have the correct drivers installed for it ?
And does the camera work ?

Yeah, its plug and play no drivers and the camera it self works

Maybe you could test it on a diffrent computer to see if it works then.

I did, it might because it doesnt work with windows 10.. because both computers i tested it with have windows 10

could be, but it does detect the microphone so thats kinda weird.

I know you said it's plug and play, but does the manufacturer's site have a driver update?

yeah, i changed to windows 8 still nothing i have no idea. i emailed them hope they email back kinda confused.

i couldn't find drivers at all

2.0 is the port on it, i've did all the USB ports i have lol. im just gonna guess that the mic doesn't work or i have no idea, i just got it to skype with my girlfriend but ill just buy a mic. i just dont understand why it wont work it shows up and all. but thanks for your help.

I guess you should just get a replacement sent then.

Not worth it. im to lazy and it was only 15 bucks. so ill just get a good mic for Christmas but thank you for the help :) have a good day.