I have a 500gb that I bought awhile ago and it was lightly used and yeah lightly used so I bought it from him and was not happy with the performance. So I took it out and left it there and forgot about it until know. I did a Crystal disk Benchmark and the speeds where I would rather use a 256gb USB 2.0 flash drive as a storage media than this potato. Is this normal or what? 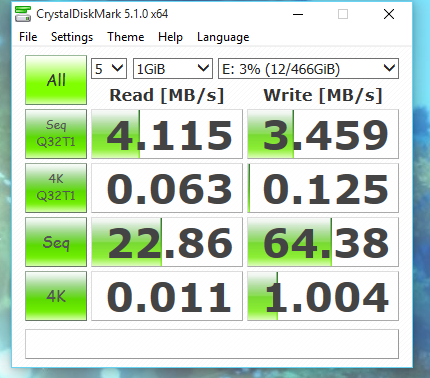 ps. I can't do a health check on HD Tune due to not fully compatible with windows 10 and also my pc become sluggish when installing this drive. Also normal?

That compability issues seems wierd... Do you have more information about the drive (Model, Year, How is it connected?)

I never use second hand HDD's pretty much for this reason, you never know why they got rid of it of if they were in fact telling the truth about how hard they were used. I've pretty much gone away from using data enhanced corrosion and pretty much use SSD's now, cost a bit but not had one go bad yet (touch wood).

take what you want off of it and use it as your new coaster.
its second hand. ligtly used in their eyes could be in your eyes 24/7 100% read and write load.

This and green drives are notorious for crapping out.

i was gifted a green 500 gig as a starter drive so i could get my PC up and running for the first time. sat there for weeks trying to figure out why nothing would install.
it died and decided to become read-only. but reported to be 100% fine.
I baught an ADATA SP600 128 gig after that. <3

The drive will soon fail...

I have EXACTLY the same issue. I had a WD Green Drive in my server in raid and the speed was horrible. I removed it and replaced it with another WD Blue drive instead and the speed increased ten fold.

Green drives, no matter the manufacturer, have high failure rates because they are made out of parts that don't match the requirements for higher speed/data transfer in the higher tier drives. These are typically the same style drives they use in Laptops for low power consumption, due to the top speed being rated from 5,400-5,900 RPM max. The disks are of lesser quality so they build the motor drive and controller board accordingly, as cheap as possible. This still applies to 3.5" form factor HDDs used in PCs, if the disks don't meet requirements to be used in a 7,200 RPM drive, they are put in a cheap "Green" or low power drive chassis.