Now I do realize that of course software RAID would be completely unstable, but I don't really keep any important data on my PC, and the few bits of important data are on a few flash drives, so should I lose my data I'd be fine there.

and I do realize that a decent SSD is going to be at minimum twice as fast in raw speed as the RAID 0 array, but am I just crazy for wanting 1TB of overall fast storage vs 240gbs of really fast storage + 1TB of average storage?

Cheapest 1TB SSD appears to be $199 compared to a current sale on WD black 1TB drives on newegg that puts them at 65 each
https://pcpartpicker.com/part/ocz-internal-hard-drive-trn10025sat3960g

-
-
more of a crazy thought, wondering about others' thoughts. It would be reasonably speedy 1TB's worth of storage at $70 less than the cheapest SSD though right?

I suppose this would have been more relevant years ago when SSDs were still really expensive per GB, though they still kind of are at least compared to hard drives.

I did already order a new WD Black drive after the last one screwed up my PC, must have been one in a million or something that caused the issue, as my current mass storage drive has almost 15k hours on it. Though it's just slow now, it seems to still function fine. 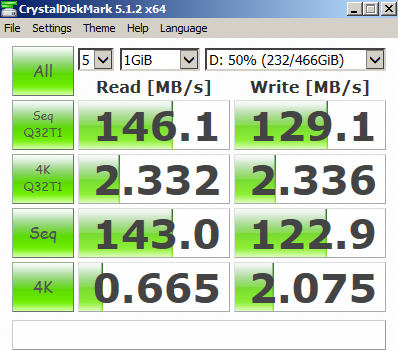 From what I've scrounged around online it still seems that the OCZ nearly doubles what 2 WD Blacks in raid 0 are able to do in R/W performance. Though I wouldn't touch the OCZ with a ten foot poll because its pretty pitiful compared to the rest of the competition.

In all honesty I'd save up for a decent SSD doesn't even have to be a 1tb just go for a smaller ssd with a 1-2tb hard drive.

might be fun to have the RAID 0 though, just wouldn't make any real sense to do though

$239 for the Ultra II, starts getting fairly expensive, and buying 2 480gb drives would make more sense.

Every RAID Zero I have ever made has failed. Most recently back in December with RAID 0 SSD's. I have tried software raid, Intel raid and PCIe server card raid. Yes, the speed gain is significant. No, I will never ever try it again.

After having RAID SSD and I went back to 2 separate SSD's (setup to be slow and reliable). I thought I would notice a slow down, but a single SATA SSD is plenty fast and (relatively) zillions of times faster than any HDD. It's not the raw speed, it's the response time. 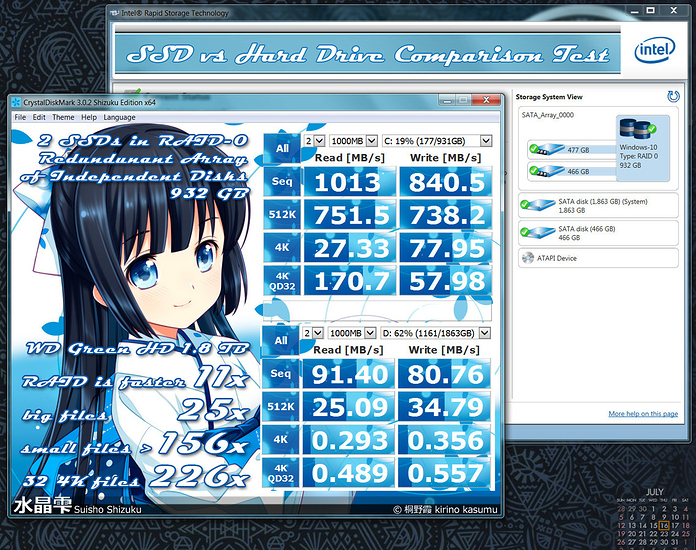 This is from the raid ssd, but note the Small 4K Files near the bottom. The SSD was 156x faster. No HDD can touch that.

Your mileage may vary.

the ssd will be much faster in regular windows tasks.

I used 4x 500gb raid0 for a long time on my AMD system, it was awesome pre 2011 when ssds were mad expensive

I went with a 240gb SSD for ease of use, RAID 1 or 0 would give you only 1Tb of usable space though.

Both RAID 1 and RAID 0 cut your capacity in half though...it treats your 2 drives as 1 drive with say 500gbs of space but with basically twice the speed.

Are you sure you're using RAID?

raid 1 does that, raid 0 is drive size multiplied by drives because it stores different bits of each file across each drive, with no data duplication.

Ah, although I would have probably split the drive into a few partition with only 1 each actually in the RAID array, that's a thing right?

Typically when I have set up a RAID, I had to boot into a special raid BIOS to select which drives are in the raid and what type of raid 0, 1, 5, 10, etc. Then it formats (stripes) all the drives and builds the raid. I may be wrong but I don't think you can assign half the drive partition for raid stripe format and half as normal NTFS. You can partition the finished raid any way you want, but I believe it always grabs the whole drive on initialization. I think it has something to do with the raid is always based on the smallest and slowest drive in the array.

RAID (originally redundant array of inexpensive disks, now commonly redundant array of independent disks) is a data storage virtualization technology that combines multiple physical disk drive components into a single logical unit for the purposes of data redundancy, performance improvement, or both. Data is distributed across the drives in one of several ways, referred to as RAID levels, depending on the required level of redundancy and performance. The different schemas, or data distribution la... Matrix RAID is a computer storage technology marketed by Intel. It is a firmware, rather than hardware or software, RAID system. Matrix RAID first appeared in the ICH6R "southbridge" chip. Intel uses an 'R' at the end of the southbridge's name – ICH9R instead of ICH9 – to indicate when a southbridge contains their Matrix RAID technology and no other upgrades. Complicating the matter is that instead of "R," a "DO," "DH," etc. has indicated a southbridge that combined RAID with non-RAID-related upg...

If you are using Windows 8 or 10 just use storagespaces. Way more flexibility than RAID and performs as well as cheap consumer level RAID solutions available in most mobos.

Once setup you can move your drives to another system without loosing the storage space, you also have options for striping, mirroring or parity protection plus the choice of NTFS or ReFS.