I currently have a fractal design define r5 and I have pretty much maxed out its capabilities.
It hosts a:

The AiO loop has begun to make really annoying sounds. I can best discribe it as the pump sounds like a cement mixer.
I would like to replace it with a custom loop but the reserviour won’t fit my case. So I am looking for a good case that is able to house all of it, with the least of compromises possible.

On my mind is the fractal design define 7 XL, but I would like the crowds opinion on that.
Secondly, I need to source good quality loop components in Europe, Germany with metric units.

Thanks for your time and stay healthy in the current moment.
~~ Inty

I have a Phanteks 600 holding my TR right now, along with 7 3.5 drives, 3 2.5 drives, 3 nvme, 3 GPUs, a SAS hba and a dual sfp+ nic. It’s a mess with that many drives. Would have been better with a case that had a backplane instead of two cables for every drive.

also is a stacking case, so you can add modules like the p100 for more space 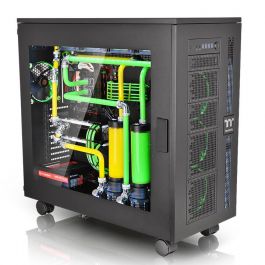 The first super tower chassis with full assembly concept, experience the true “DIY” by putting every piece together to complete a high-end system.

The Define 7 XL will surely take all your hardware, so if you like the looks, then go for it.
Do keep in mind though, that since you need to mount 6 HDD’s + an optical drive, you will limit your radiator space a lot.
Here are two pages from the 7 XL’s manual: 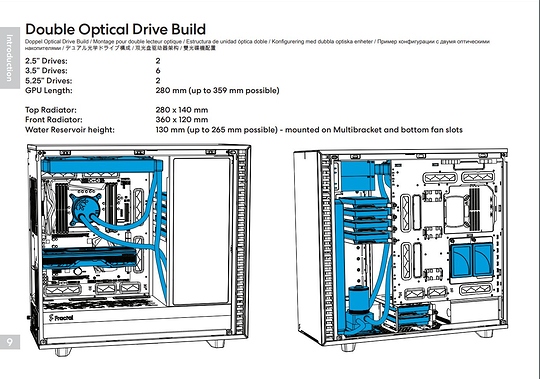 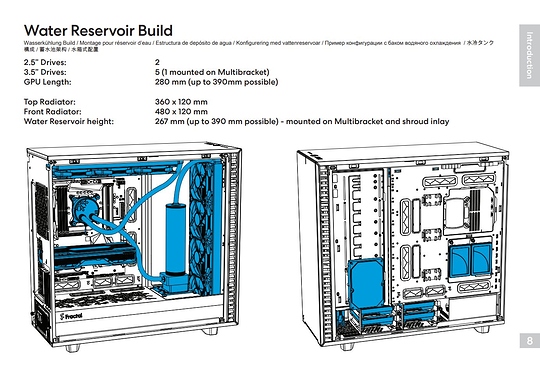 Their “Double optical Drive Build” Will allow you to mount 6 HDD’s, your optical drive, and to put a small reservoir/pump combo in the button of the case. But, it will limit you to something like a 280 mm radiator, which isn’t enough for a 2950x, a 1080 and a Vega 56.
If you only want to watercool you cpu, you should be good. Just pick a thicc 280 mm radiator.

Their “Water Reservoir Build” will give you space for two 360 mm radiators and a big reservoir/pump combo.
But, you won’t be able to mount your blu ray drive, and you will be limited in the HDD department.

Now, if you want to custom loop you cpu and both gpu’s, and still mount the blu ray drive, and your HDD’s, I have a suggestion for how to do it.

You get the 7 XL, and configure it like Fractals “Double optical Drive Build”
HDD’s in the top and/or behind the pump/reservoir.
Get a small reservoir pump combo, like Watercool’s Heatkiller D5 Tube Reservoir. They range from 100 to 200 mm in height.

They have blocks for Threadripper, GTX 1080 FTW (also in plexi version), as well as for reference design PCB Vega gpu’s.

And they have this big beautiful bastard, the MO-RA3 External Radiator.
It comes in either 360x360mm, or 420x420 size. Either are plenty for cooling capacity.

To connect the blocks inside the case, to the external radiator, they conveniently have a PCI Slot Passthrough bracket..

Watercool is a German manufacturer of high quality water cooling parts, and since you perfer a European manufacturer, and are located in Germany, its a no brainer

If you don’t want a external radiator, and only want to watercool your CPU, then I’d suggest an Alphacool NexXxoS XT45 Full Copper 280mm radiator. Alphacool are also German.

EDIT: I’ve overlooked it, but it clearly show on the Double Optical Drive build, that you can mount a 360 mm radiator in front of the HDD’s. IMO, it just puts extra heat into your HDD’s, which will probably shorten their life span. But it’s an option if the MO-RA3 ain’t you thing