So I have started to build a home network.
I have a DC giving out DHCP, handling DNS etc.
I have a cisco ASA 5505 as my firewall/router.
I need a AP for my wireless as i can't get my Plusnet One hub to do this when it is not the router.

Any recommendations?
Looking for something under £80.

Almost any router in existence will act as an AP if not doing the routing. Bummer that yours won't. You can get AC ASUS routers second hand that are really good bang for buck.

I use this and its pretty good: 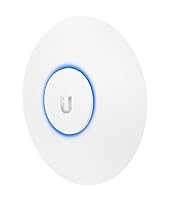 Only downside at the moment is that it seems to be more expensive than I bought it for and less outlets sell them (at least in the UK which is rather strange because I bought it around 6ish months ago) but if you can get one for a good price the performance is great.

Almost any router in existence will act as an AP if not doing the routing. Bummer that yours won't.

Almost all routers provided by ISPs (at least in the UK) have a build-in modem which means you can either use it as modem/router/ap or only as a modem which disables the router/ap functionality. Not sure about the Plusnet unit but my VirginMedia one works this way.

Lol I read "WEP for home network" and I nearly cried out "why!".

But as @MichaelLindman I do recommend Ubiquiti's products, they can be pricey, but their well worth it imo.

Lol I read "WEP for home network" and I nearly cried out "why!".

I run 8 Ubiquiti APs at my companies HQ. They are really nice

By the way, I recently got the same ubiquity AP linked above, and I love it so far.

I had a similar but also balking reaction. WAP was shit on dumb phones, I though this was some mad plan to have a mobile only network separate from the WiFi that ran wap and that is a sad day indeed.

Thanks for all your responses (apparently I turned my email notifications off so I thought no one replied).
I was looking at the ubiquity AP's, just wondered what others thought!
Will probably invest, thanks everyone!

See if you can get a cheap second hand Ruckus 7363 they have really good though put and have alot of features.

UbiquitI AC Lite is a great access point. Mine is serving a 4500sq ft house with 20 devices spread across three SSID on separate vlans routed through a pfsense box. Ubiquiti controller software on an ubuntu vm under 9.10 Freenas. No slowdowns and great coverage on 2.4 and 5ghz.