Hi folks, I am considering trying to clean up the following mess by installing a compact wall cabinet and transferring my "server’ into a a 2U chassis if possible. 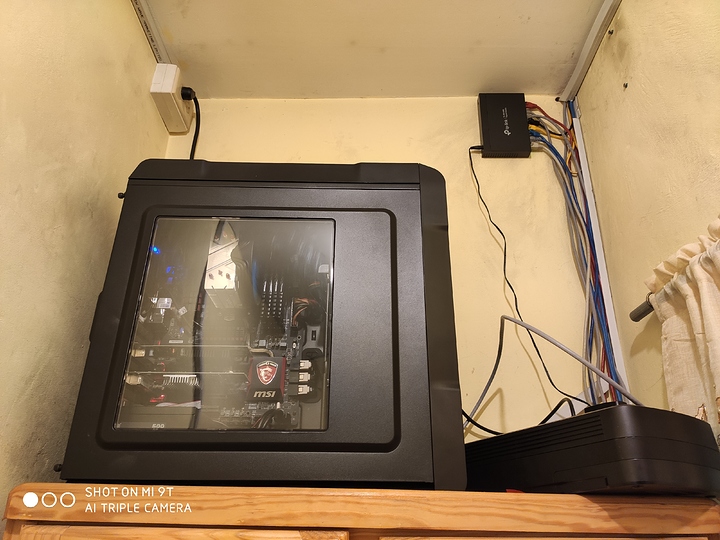 It currently sits on top of a bookshelf and has been there for the last 5 years. This is the only space available in the house to set this up, plus all of the cat5 cables are already run to this location.

The current system houses an AMD 8350 with full size ATX board 3 x3.5" HDDs and 1 SSD. The primary usage at the moment is to run a pfsense VM with a HP 4 port Nic passed through. The 8350 is total overkill and definitely not the most efficient CPU for 24/7 usage but it was used to replace an AMD A4 that was barely able to run a host with 2 VMs.

I also want to use the cabinet as an enclosure to provide some cooling with the fan mounting options to the top of the cabinet. I recently installed the TPlink switch to help distribute some Vlans to other locations on the compound and have noticed that it gets pretty hot to the touch.

I was looking at the following 6U cabinet or similar options:
https://www.amazon.com/dp/B01K1JJHTO/?coliid=I3LYCMF85UET3V&colid=2B3L4U7V4GH4L&psc=0&ref_=lv_ov_lig_dp_it

I don’t seem to be able to find a 2U chassis to fit a full size ATX board. ATX seems to be supported on the larger 4U models at least from what I have seen so far. 4u really shouldn’t be an issue as only this machine and the switch will be residing in the cabinet but wanted to leave some free space in the event that I require it in the future.

I would like to eventually swap out the 8350 with something more efficient like a Ryzen/micro ATX combo which would fit well into a 2U chassis but would like to keep the 8350 until the budget permits it. So far I am looking at obtaining the cabinet and chassis. Let me know if you guys have any suggestions on what to use and what is available or if there may be a better approach to this?

*Also forgot to mention due the depth of these style cabinets mainly being for comms equipment I don’t mind fitting the PC components into a smaller case and literally just resting it inside of the cabinet? Again just looking at options…

Me I would see if you can find a 6u network rack or 12u used . Just to save money.

For smaller “short depth chassis” I use them but 4u from Norco they have great prices and products, bad documentation no manuals (don’t buy their rails) 16" depth chassis rpc 431 and rpc 432 are great. Rosewill have had a history of not lining up with u holes on rack they are cheap but that comes with poor quality. Rose will has short depth chassis too for network racks.

I’m a fan of vertical racks. Typical wall mount racks aren’t intended for deep servers. Even a lot of switches are too deep for them. Vertical racks give you more depth (unlimited really).

There are closed variations as well.

Please enjoy this video of an older man sharing his love for his vertical rack.

Thanks for the heads up on Rosewill. I saw some 15" depth variants that should work on these style cabinets. I also saw similar style cabinets that are much cheaper on ebay though they are not vented as much but I am not opposed to making holes for extra fan mounting.

This is interesting as I knew about the closed variations for horizontal mounting but not vertical.

The one featured in that video is expensive but you can find cheaper variations on amazon. Also seems like rear access would be a problem for you with a standard rack up there.

Yes, I will need to have the cable connections long enough to connect to the machine before it goes all the way into the cabinet. A rail kit may make this a bit easier to do.

Need front and back mounts for a rail kit.

The 6U wall cabinets have front and rear mounts though getting access to the rear to mount the rail kit may be an issue unless it is the snap in type.

Oh interesting. There is usually a minimum depth for the sliding rails I’d look out for then.

I tend to use Geizhals when I need any hardware. They have a very nice filtering on items, not to mention a lot of them. Have yet to find a better HW database online.

It’s in German, but majority of links have images, and most specs are called the same.

Racks are cool and all, but you could just get a light curtain to cover it?

Unless you have a load more equipment to put in?

Lol, not a bad idea to hide the mess, cheap too. Besides the mess another concern was the temp. It is close to the ceiling and we are going through a pretty hot period of the year fluctuating from 30 to 36C. I was thinking I could help the cooling a little bit if I had everything in an enclosure with fans on it.

I was thinking I could help the cooling a little bit if I had everything in an enclosure with fans on it.

Tbh, it might make it worse. A couple fans on a closed rack surrounding your case won’t be as good as open air.

Yes, that may be quite possible due to how close it will be to the ceiling. I have started considering a shelf option and just using the money to build a new machine in a smaller case instead and try to route the cable as neat as possible using some ducting.

Interestingly I believe the most amount of heat from the PC seems to be coming from the HP 4port Nic but I have not yet confirmed that. I am a bit more concerned as to why the TPlink switch is so hot to the touch as I have 2 more about the compound that are barely warm to the touch. Again it may just be due to the proximity of the ceiling.

Yes, that may be quite possible due to how close it will be to the ceiling. I have started considering a shelf option and just using the money to build a new machine in a smaller case instead and try to route the cable as neat as possible using some ducting.

Yeah I think I’d recommend this. A rack will probably just get in your way.

Wouldn’t hurt to place an external fan up there to blow the hot air away though.