My desktop died a year or more ago and I’ve been just using my laptops since - but with AMD catching up I’m kind of excited, and ready to buy new/build. Prices are already way down on CPUs and GPUs, and cash isn’t a big problem - so I can buy whenever - but I’m sort of holding out for that sweet spot for ultra-low prices on ryzen 1 or 2, or perhaps better architecture for the buck on zen 2.

This will be mostly a bedside desktop - light gaming, streaming up to 4k vids, light audio recording/editing, probably some graphics/video/productivity stuffs - but nothing seriously resource intensive… basically general use with a little room.

Budget: flexible - requirements aren’t that high and and I’m a patient bargain shopper, so currently thinking around $450-500, roughly.

The question I have for y’all: do you guys think prices will continue to dive on 1 and 2 series ryzen leading up to zen 2, or are we already nearing rock bottom? Microcenter just dropped the 1700x to $130, which I think is a pretty good deal, particularly with the $30/off motherboard combo - and it would be enough for what I’ll ask of it… tempted to just go pick one up. I suppose I’ll at least wait until more is revealed @ computex, but what do you guys think: I could maybe wait for 3rd gen… may not need it - but possible the newer architecture will be a better value? Additionally, are GPUs prices going to continue to plummet with nav coming out, and/or Intel joining the fray?

I have a rough draft on sys builder, but it’s a beautiful night and I’m on my phone atm; not that complicated anyway so I’ll just type out what I’m thinking so far:

3ghz or better 16gb ram - currently $65-70 for various makes with the right deal - may save that till last as it seems to keep getting cheaper.

This will be my first build (not counting upgrading/repurposing workstations)! Any additional advice beyond the questions I asked appreciated.

What kind of monitor are you using, and what kind of output cables do you need to work with?

Edit: I’ve seen some cheap 4k stuff come up recently so I may spring for something newer in the nearer future, but am going to wait awhile probably. Assuming hdmi and/or display port fine for video card. As far as gaming I’m only worried about single player so I don’t think I need anything fancy.

Wait for at least the announcement of the 3’s to see if they suit your liking ASSuming pricing is released also. If not try to wait for pricing for both processor and motherboard… maybe testing if you got patience otherwise cash in on a hell of a deal on the 2 series and whatever board you want for overclocking. Boards probably won’t be discounted much if any from their current price though.

The question I have for y’all: do you guys think prices will continue to dive on 1 and 2 series ryzen leading up to zen 2, or are we already nearing rock bottom?

Prices will drop, more importantly imho with Ryzen 3000 you will get either more cores for the same money or same number of cores for much cheaper.

Depending how light your gaming aspirations are you might get away with a 2200G or 2400G. Or whatever new Ryzen+Vega or Ryzen+Navi processor(s) AMD drop in a few months.

I’m really keen to see if AMD release an 8c/16t + GPU processor inside the next 6-12 months. If so, I suspect it will be very nice indeed.

Honestly I don’t think I’d be miserable with the 2400G, based on what I’ve seen. But it wouldn’t leave much wiggle room, and I’ve got the +$100ish bucks for a couple more cores and a 4gb or better dedicated. But not 100% off the table… we’ll see what’s on the shelf at what price when I do decide to spring. Rumor seems to be the 3400g will probably stay with vega 11 and have only slight clock improvements; but who knows, maybe we’ll find out more about that next week.

I think even for light gaming a 570 or 580 would be better, gives you more options

Yeah, pretty sure I’ll go that route. Just picked up the ADATA - XPG GAMMIX D10 16 GB for $63/shipped @ Rakuten since I can’t imagine that’ll get much cheaper. Rest of rough draft/ build:

(stuff marked $0 is non-specific/just placeholders for crap I have lying around/expect to use, except for the probably included stock cooler) 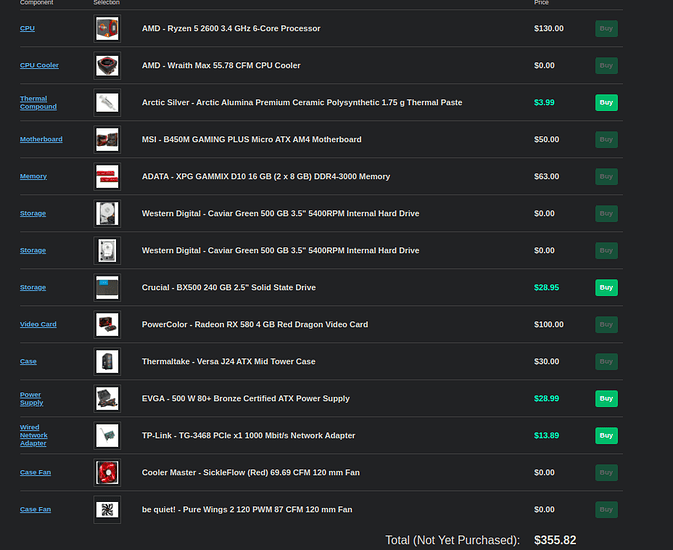 Yeah, main reason i mentioned the 2400G is because of the imminent navi drop.

You could build with it now and then add a GPU later.

I agree; that wouldn’t be a bad route. Single thread performance on 2400g is actually kind of impressive - considering what it is.
But I landed on a used Powercolor RX 580 8gb Red Devil yesterday @ $119 shipped from a reputable seller and decided to take the leap. While some things will certainly continue to get cheaper as we get nearer to 7/7, I’m not sure the overage of used [now] mid-range cards won’t begin to dry up - possibly leaving pricing around where it is for that market (very unlikely I would buy anything “new” anyway).
At any rate, right or wrong - I’ve been shopping for nearly 6 months - and I’m ready to start tinkering instead

Considering the power requirements of Zen 2 only the x470 motherboards with the beefiest VRMs are “officially” supported. So basically only flagship x470. I’d honestly just wait. The PCI-E 4.0 drop and all the other benefits of being able to run multiple NVMe SSDs without saturating the PCI-E bus sounds fantastic.

There is one constant. CPU prices keep dropping.

Mining messed up GPU’s but you can be sure Intel re-action should be comical and money saving over the next 6 months.

all the other benefits …sounds fantastic.

Agreed. But as someone who’s been 5+ years behind the curve on hardware for quite awhile, that’s looking to jump up to say, only 2 years behind - my main interest less in the new tech/features specifically (except out of general interest), and more in their ability to further drive down pricing on the old. I suppose I was curious whether we’d hear anything confirmed about the lower end of gen 3, but that was a longshot.

There is one constant. CPU prices keep dropping.

Mining messed up GPU’s but you can be sure Intel re-action should be comical and money saving over the next 6 months.

SSD and RAM have also been on a steady decline in price for awhile, but I suspect they will plateau sometime soon; so in the long run, I think you’re right.
And yes, I if was feeling more patient it would be better to wait a bit longer. As it is, I’m going to continue to hope to see new lows on ryzen 2 within the next week, or maybe two - but if not, c’est la vie.

I’d stay firm on a flagship X470 mobo though so you can upgrade to Zen2 later without a full system rebuild.

Yeah that kinda makes sense in case he want’s to upgrade cpu later.
All the B350 and B450 boards are kinda rubbish wenn it comes to their vrm implementations.

If he want’s to jump on a 400 series board right now.
I would say either the Asus Crosshair VII Hero, or Asrock X470 Taichi.
Those are pretty much the best X470 boards to buy, wenn it comes,
to overall build quality and vrm implementations.

But yeah it might be worth to just wait for the X570 boards.
I will create a vrm overview topic about them wenn they are out.

Hmm. I appreciate your thoughts, y’all. I hadn’t really considered going upwards of a b450 as I assumed beyond that level would be getting into features I wouldn’t need or care about… but looking into it further I see that isn’t entirely true. And better upgrade-ability is a fair point. Very doubtful I’d spring for a Hero, but the Taichi looks pretty nice, and isn’t quite as much of a stretch if I can catch one on sale… it’ll come down to what seems like the best “deal”, all things considered, when I hit microcenter. But this is cool; gives me a little something to chew on for the next week or two

(already purchased every thing else interesting).

Considering the power requirements of Zen 2

What sort of requirements are you talking about? I’d suggest that the beefy VRMs in X470 high end and X570 are in anticipation of the expected APUs that will be coming later with actual competent Navi GPU on them. i.e., a desktop equivalent of what Sony have going into the PS5.

THOSE might need or benefit from a lot more power.

Sure, maybe if you want to oc the snot out of it you’ll “need” a beefy VRM, but that goes without saying whatever CPU you have.

That doesn’t make sense tho. Most of the high end boards don’t even have video out for apu. And I’m not sure if xfr or boost is added to tdp rating.

Mostly I heard its because of pcie gen4. Two times the bandwidth per lane.

But, that also does not make that much sence since some x470 boards get pcie 4.0 unlocked too.