Volkswagen AG has ordered an external investigation into its cheating on U.S. air pollution tests for years, saying that regaining customer trust is key.Investigating
the deception, which affects almost a half-million diesel VW and Audi
cars sold between 2009 and this year, is a priority, and the company
will cooperate fully with U.S. regulators, Chief Executive Officer Martin Winterkorn said in a statement on Sunday.

The German carmaker admitted to fitting its U.S. diesel vehicles with
software that turns on full pollution controls only when the car is
undergoing official emissions testing, the Environmental Protection
Agency said Friday, citing violations that could add up to $18 billion
in fines. The company said it has also heard from the Justice
Department, which the EPA said could pursue criminal prosecution.

This sounds seriously bad.
Not sure what this is going to mean for VW. 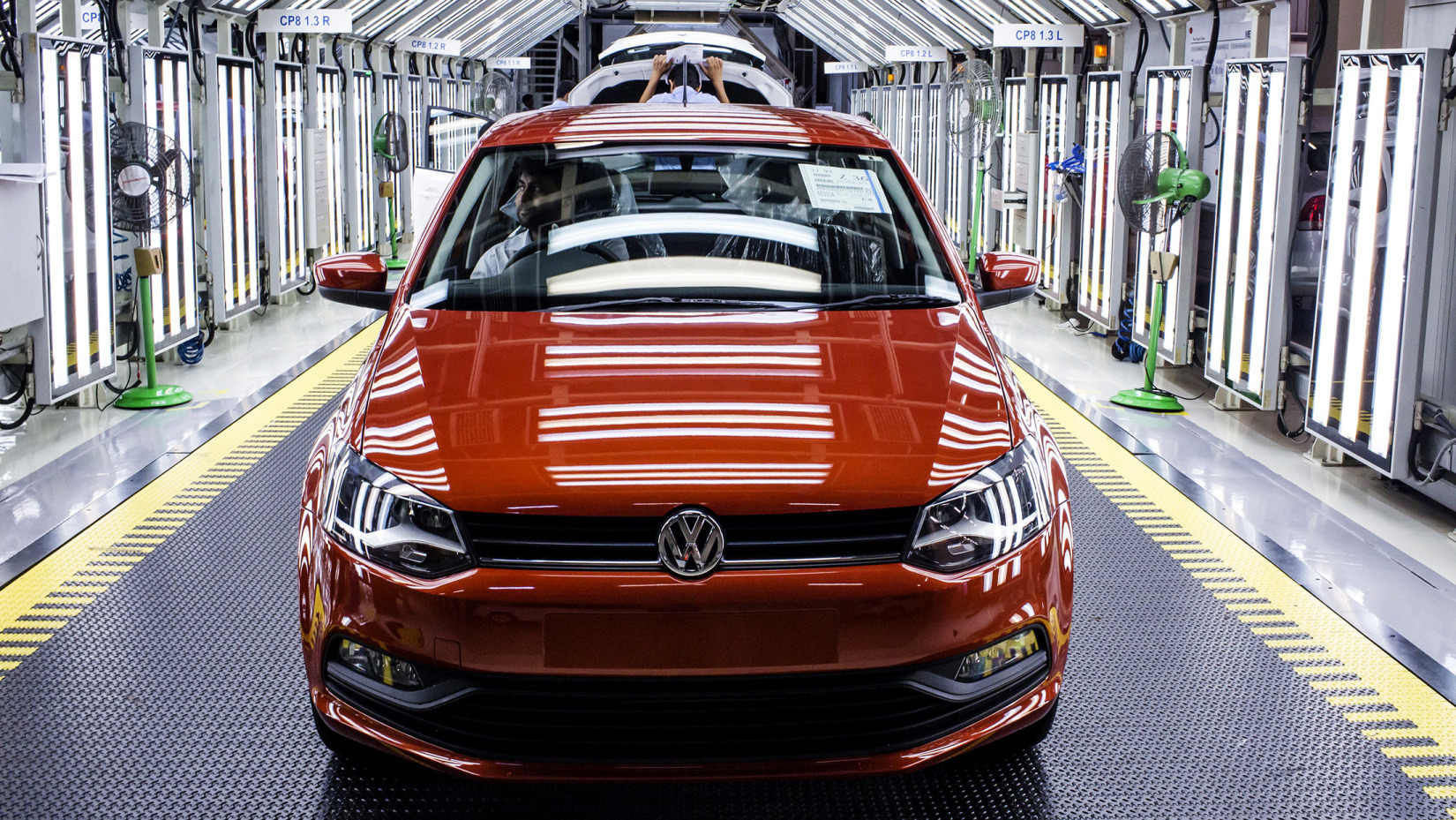 Volkswagen AG has ordered an external investigation into its cheating on U.S. air pollution tests for years, saying that regaining customer trust is key.

This is going to be a big recall for sure.
I´m currious if they have done the same in other country´s,
in which taxes depending on emission..

If the German government could turn serious on NSA and Facebook, Google, etc. spying on the Germans, that would be great!
Sorry for this oftopic start, just me not being happy how things are going here since Merkel is busy shaking hands with economy.
Concerning VW and most other carmakers: As they are not interested in going electric, this was not that surprising. I really don´t expect german industry of any kind to survive TTIP anyway...

I believe that VW has been doing a bit of research into electric cars. Recently they unveiled a hybrid Passat and demonstrated automatic charging through both a robot and a inductive plate. However its not quite like Tesla. On a side note I think that one of the only true 'eco' cars is the BMW i3. I have been to the factory where they are all built and have seen that the i-series are all made from the wind turbines that power the i-series production line. The whole ethos, if that is the right word, of the car is to build it completely sustainably. At the end of its life, the car is 95% recyclable.

Even if the engine-block is the same in every 2 Liter Diesel engine from the VW-AG (the term for the VW company with it's daugter companies) the engine itself is different for different countries resulting in over 100 engines using the same block (all called roughly the same). Meaning: Even if VW used a test-defeating setup on the American model that does not mean that European VWs ship with the same software version. Since the software is proprietary and closed-source testing this is somewhat difficult.

One of the reasons that a car has over a 100 individual control units are testing purposes. If one would put all the functions in a central control unit testing it would be very very hard, individual units with only a few functions are easier to test.

But they admitted it. So there will have to be changes.

Even if VW used a test-defeating setup on the American model that does not mean that European VWs ship with the same software version. Since the software is proprietary and closed-source testing this is somewhat difficult.

Yes ofc, but also in the EU there are country´s in which the taxes are based on Emission.
So i'm realy currious if this is only going to be an issue according to the US.
Or are there also other country´s who are going to start an investigation about this issue.

Oh, the German minister of transport has announced an investigation. But I do not think that there will be a huge fallout from the government. It is known that car manufacturers cheat on the fuel mileage test. (Something like: disabling the alternator, physically unhooking the climate control compressor and other stuff) So cheating on the emissions test would just be expected. With Diesel being less expensive than gas in Germany (the vehicle tax is higher so diesel are for frequent drivers) and Diesel vehicles making up half of the cars bought here I do not think that the impact in Germany will be that big for Diesel vehicles. USA? Different story.

So we know that the tests done in Germany at least are somewhere between shady and fraudulent. But up until now we did not have the political leverage to change that. Maybe there is now, but I doubt it.

You have to know: The German car manufacturer lobby is equally as powerful as the NRA is in the states. Our transport minister is a conservative (from a bavarian party, which forms the conservative wing of our conservative party), BMW being one of the biggest employers in his home state. So I doubt that there will be much to expect from him. The bavarian conservative party prizes their independence, so he will get heat from back home if he comes down on VW too hard.

They like to show their factorys and tell everyone about "thinking blue". Last year, in Germany 9,000 full electric cars were build, half of them were sold to the carbuilders themself. (Source: Heuteshow from 18.9.2015)

The problem is that VW would have probably failed the restrictions for Diesel cars in the US even though their Diesel cars are much more efficient than any American car running on gasoline but the US government is just too strongly against Died to realize this. It's still shitty that VW did this though

Uhh, this one is funny. Anti-Reverse-Engineering laws in the US significantly delayed the discovery of VW's cheating practises. Link here

All I can say is that VW could have avoided the image damage, the loss of their share value and the now the potential job cuts if they had not used manipulating software. Such a shame..

All I can say is that VW could have avoided the image damage, the loss of their share value and the now the potential job cuts if they had not used manipulating software. Such a shame..

Its indeed a shame, especialy if there are going to be job cuts because of this.
I dont know how big the market share from VAG is in the US.
But in Europe its realy big, and like i said there are a couple of EU country´s in which the taxes are based on emission aswell.
Netherlands is basicly not yet one of those country´s.
But if i´m right, Belgium and Germany, Italy is @Zoltan ?

The German vehicular tax is based on a) displacement and b) emissions.

i'd keep the VW if i already had one, i mean, it's gonna pass the emissions test no problem. what car can give you that guarantee?

You have to explain this one to me. If the car is outside of the warranty period, how will it be guaranteed that it will pass the emissions test?

havent you read the OP? it creates a new fuel map when it detects when you are testing to artificially pass emissions.

stop being such a neckbeard.

I've read the news articles and I'm not being a neckbeard. Oh sure the doctored fuel map will ensure a positive test result. But the test result will not be admissible for the emission classification.

In other news:
The German government was aware of the acts of VW. End of July the government stated that they as well as the European Comission that these defeat-devices exist and measures have been unable to stop them.

Link to the German source. This will probably hit the English news in a couple of hours.

More news:
VW under investigation for not warning their stockholder early enough about the impending fine from the EPA. Stockholders may be able to sue for damages.

Link to the German source.

UK has a similar thing, others do also.

Everyone knows that TDI was what worked for VW. They joined the hype of common rail because of the criticism they got against the noise of the TDI's, which could not be sold in the US for that reason, etc...

Everyone knows where this is going: the plan of the powers that be is to reduce the mobility of people by taking their cars away and forcing them to only venture into mobility whereby all movements are monitored. Even for automobiles, with the automated registration recognition that is implemented everywhere in Europe, freedom is extremely limited. It is what it is...

VW stocks are down like 35% since close on Friday.
Ouch

This hurts my brain...