Videogame idea I am working on

Hey.
So I have this one video game idea that I will try and work on and will most likely not finish (just like all the others). But I will work on it anyways, because hobby…

The story so far:
So I bought Carcassone on Steam some time ago, played a bit of it, got massively disappointed by it and refunded it. While I was playing, a few ideas popped in my head and here I am…

The idea so far:
So my idea is this: you have a map already premade, with resource nodes and rivers and stuff. And you set your castle. Then slowly each turn you gather resources and build up your kingdom. The resources buy you cards. The cards do everything - build, command armies, influence NPC villages, etc. Now each building unlocks you new cards. And so on.
The map is tile based, so everything is set and the player uses whatever is on the map already.
There is the whole army war thing, with barracks card and peasants card giving you a warrior card, peasants with stables will give you a cavalry, etc etc… But you can send peasants to the monastery and get a priest card and buff your religion for example. You can send your priest to an NPC village and turn them into your village, basically having more land and more peasants to turn into whatever you want…
Its basically low tier grand strategy on a tiny scale. You have 1 large city you control and everything else is NPC’s and enemies.
My basic idea of the visuals is trick 3D using only 2D images. Octopath Traveler style.

What will I do now:
Programming. A lot of programming. Basically I know everything I need to make this game work. What I can’t do is art. So everything will be super place holder garbage.

What do I want to do:
Multiplayer. Having absolutely no experience with networking and coding for multiplayer I will set that goal for whenever the game is complete. If the game ever get completed.

What do I want from you?
Feedback. What do you think of the idea? Anything you think may improve the game? Content wise I don’t want to go too deep now. I just want couple basic things - army and religion gameplay will be enough for version 1. Eventually in V2 I may add other stuff like magic, quests, culture, etc., but I don’t want to think about them and lose focus on the basics. Does that seem like a slice of gold or a steaming pile?

This sounds very interesting, and will be looking forward to seeing your progress.

So quick idea bounce off…

The plan is the entire game to take place on something like 10x10 pieces map. Now since the view is not going to be top down, but somewhat at an angle, imagine Don’t Starve style 2D sprites and view, so the further away objects will be smaller.
Perspective, Pete… That’s the word you are looking for…
Anyways, that basically means there will be more in the background than is gonna be playable on the map.
What is a good way to deal with that extra land?
I can do the Heroes 3 thing and just cut the map… 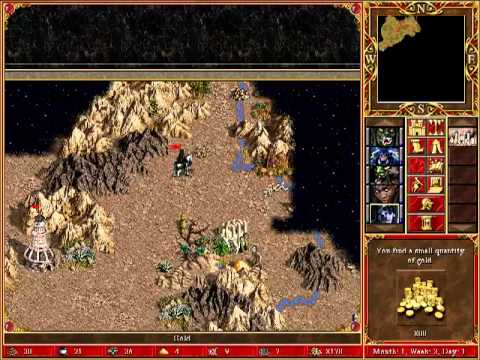 That’s the easiest way… Just cover it up in fog or clouds and pretend it doesn’t exist.

Another option is to surround the entire thing with mountains or a sea, so the entire game basically takes place on an island or in a valley, locked away from the rest of the world…
That’s kinda more realistic and justifies the existence of other maps, since there will be a few… 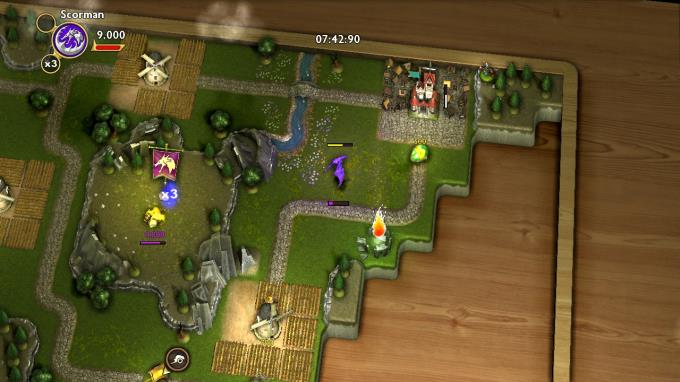 Honestly I’m thinking of option number 2 that will take me most effort, but will look the best. It will make the map look like part of the world… 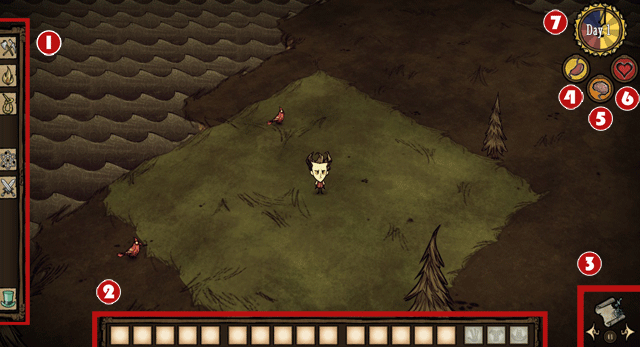 Like the sea on the left - it’s an artificial barrier, but still doesn’t break the illusion of a huge epic world.

Having a smaller 10x10 map might make using an actual board a good choice, seems like it would be a good fit for your concept.

Personally, I use nothing (black) for map boundaries. May not always look the best, but is the easiest to implement.

And that is kinda important when

So I will do that… Eventually I may change it, but for a start it can stay black.

I would also just cover the map limits with fog or something for now. Like you said it’s not going to be super important early on, and you can always change it when you get the basics working.

Other than that the basic idea behind the game sounds interesting.

And of course, because I want to start work on it, the online account that I have made doesn’t want to connect and I can’t use the game maker studio in any shape or form… Fuck online accounts and online connectivity… Fuck modern era, fuck the all online requirement thing…

Their servers were down for a while. So nobody could log in and use it… You know, except pirated versions, that have ripped off online componentry and work smoother…

Anyways, I’m logged in now, so I can start working on it…

DAY 1:
I fell over on the first hurtle. I have issues programming the map perspective view.
3 hours later I have zero results in terms of world map view.

I have done some mental gymnastics and I think I have a solution. When I get home after work I will try and program it. If not - the thing will be done tomorrow.
Once that is done I will try and make the cards, so I can start doing the interactions programming.
But first things first. 10x10 map looks much larger than I anticipated. Still I will do testing on that size.

It’s not working…
I’m gonna ask in the game maker forum for ideas, cause my brain just refuses to solve the freaking riddle…

DAY 2:
After I deleted everything and started from scratch, I slowly but surely checked EVERYTHING and what do you know, if I actually pay attention it ain’t that hard… 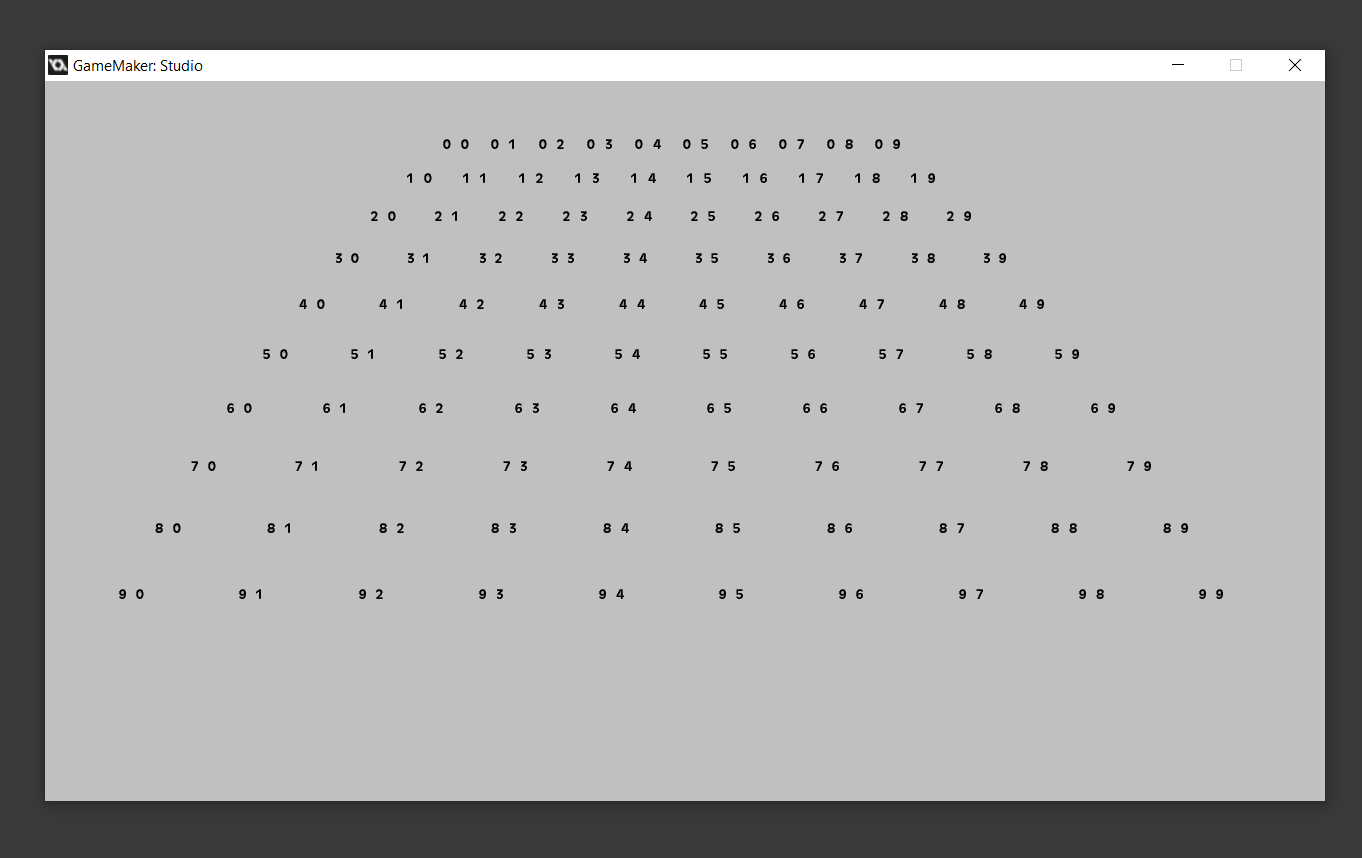 image.png1362×858 12.6 KB
Right, so those are my fields, tiles, etc… That is exactly what I wanted to make. Now the next step is to create the cards. After that I will make the interactions between cards and land…

If anybody is interested I will post the code, but if not, and I don’t blame ya, I will just show the result.

Extra thoughts…
So, I need the cards now. That’s fairly straightforward.
I need a large array containing each card’s data. I need one array, containing the cards, that are in the deck at the time and one array of the cards, that are in the hand of the player.
I have done those kinda of things a lot, so it shouldn’t be that difficult. Now what I need to establish after that is the states of the tiles on the map. is it free or taken, is it players or enemie’s, is it a city or a mine or a forest or a mountain or whatever… That will be an ass to program. But for now all I will do is mountains and fields. And I will do farms and villages only as cards. If those interactions go well I will do more - forests, rivers, mines, etc…
So here are my most immediate goals:

Devember is coming, so yeah… I’m quite positive about this…

POLL:
Shall I do procedural generated maps or hand made maps?
Procedural generation gives much larger variety of content, takes longer time to program and tweak to work properly and can make 10000 bowl of soup - each slightly different, but overall the same.
Hand crafted levels gives less variety of content, but can give much more interesting content. In the food analogy, it may have only 50 bowls, but there will be all sorts of soups and food in them.

DAY 3:
I started work on the card system and I realized something: I need to do so much more work on the map and tiles before I am ready to start working on the cards, it’s not even funny, and I am not talking about generation or stuff. Just a lot of under the hood setup that needs to be done as a basis.
So as soon as I realized how far ahead I am going from where I actually am, my goals momentarily changed…

Is it obvious I am getting excited? Those blog style posts really help me gather my thoughts, so I will do them fairly often.

Those blog style posts really help me gather my thoughts, so I will do them fairly often.

Please do, this is interesting stuff!

Shall I do procedural generated maps or hand made maps?

I’m curious, what tools are you using for this project (or the ones in the past) ?

I’m curious, what tools are you using for this project (or the ones in the past) ?

Game Maker Studio 1,4, the one that I will never forget, @anarekist bought me some time ago.
It have a pretty nice sprite editor, so I will be using that. And for sound - I haven’t decided what to do, but sounds will be added much later on. First things are the basic mechanics of the game.

DAY 5…
God damn it… I was asking some questions in the game maker forums and they gave me some answers that made me think about stuff.
That’s not all that bad, since I am still in the very beginning. Basically the idea I have is to make the entire map data stored in an external file. .ini or something. .ini is probably the best option, because that will allow me to edit and create maps in notepad instead of coding a bunch of stuff… So that’s my first task. Create the system for making maps and make sure it works properly. There goes the entire week doing this.
I have worked with .ini files before. They are super useful, cause everything is organized, but on the other hand there was always some issues with using them… But we shall see. I will try and create a couple maps just to make sure this thing works.